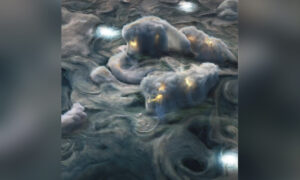 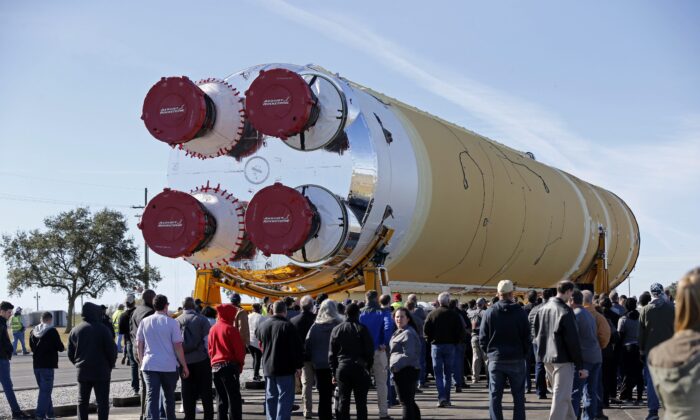 Employees and contractors watch as the core stage of NASA's Space Launch System rocket, that will be used for the Artemis 1 Mission, is moved to the Pegasus barge, at the NASA Michoud Assembly Facility where it was built, in New Orleans, La., on Jan. 8, 2020. (Gerald Herbert/AP Photo)
Canada

Canadian astronauts will join the first space mission to the Moon in 2023.

“I am proud to announce another first: Canada will join the U.S. on the first crewed mission to the Moon since the Apollo missions,” Navdeep Bains, the Minister for Innovation, Science, and Industry, said at a press conference on Dec. 16.

“The Canadian Space Agency and NASA have signed the Gateway-treaty, a historic agreement that secures Canada’s role in the ambitious project.”

Astronauts from eight countries—Australia, Canada, Italy, Japan, Luxembourg, the United Arab Emirates, Britain, and the United States—will participate in the NASA-led Artemis programme, which aims to return humans to the Earth’s natural satellite by 2024.

The Artemis programme involves a three-stage exploration mission that begins in 2021 with Artemis I, an uncrewed test flight of the new Orion spacecraft.

Artemis II, the first crewed test flight of the Orion spacecraft is scheduled in 2023. The mission plans to set the record for “the farthest human travel beyond the far side of the Moon,” according to Canadian Space Agency.

In 2024, the Artemis III mission will land the first woman and the next man on the Moon.

Bains said this programme will make Canada the second country ever, after the United States, to have an astronaut in deep space.

The Artemis project also looks to build a new space station, named Gateway, in the lunar orbit by 2026. In later space missions, astronauts will dock Orion to the Gateway, which serves as a critical outpost for future lunar explorations and missions farther into space.

Bains said astronauts will not constantly be stationed on the Gateway, which will instead operate on Canada’s artificial intelligence-based robotic system, Canadarm3. The Gateway-treaty ensures that all robotic operates are maintained and controlled on Canadian grounds.

Canadarm, also known as the Shuttle Remote Manipulator System, was first introduced on the space shuttle Columbia (STS-2) on Nov. 13, 1981. The robotic technology allowed Canada to work closer with NASA on space explorations.

On Feb. 28, 2019, Prime Minister Justin Trudeau announced a historic investment of $2.05 billion over 24 years in space exploration. Canada’s participation in the Artemis program is part of the new space strategy, which will contribute an estimated $100 million annually to Canadian GDP and create thousands of jobs.