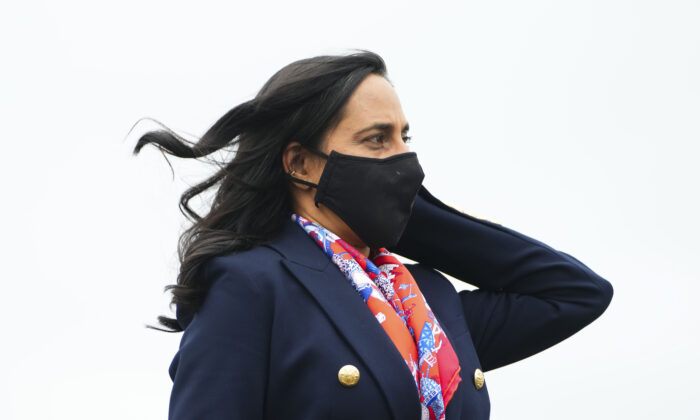 Anand said the decision was made to protect Canadians from “new and emerging threats” from autocratic regimes that threaten rule-based international order, and new weapons developed by other countries.

The minister made the announcement Monday at the Royal Canadian Air Force base in Trenton, Ont., joined by Gen. Wayne Eyre, chief of the defence staff, and Lt.-Gen. Alain Pelletier, deputy commander of North American Aerospace Defense Command (Norad).

Anand said the funding will be part of a plan in which the federal government will commit to about $40 billion over the next 20 years to upgrade Norad, a joint command system for Canada and the United States that provides aerospace warning and protection for the continent.

“This is the most significant upgrade to Norad from a Canadian perspective in almost four decades,” she said.

The defence minister had been promising a robust package of investments to upgrade the system set up in the 1950s, which is responsible for detecting incoming airborne and maritime threats to North America, including missiles and aircraft.

“In close coordination with the United States, we will establish the backbone of a brand new northern approaches surveillance system to enhance surveillance and early warning threats to our continent,” Anand said, noting that the new funding will focus on improving Canada’s ability to “respond to threats to our shared continent.”

She added that a space-based surveillance project will be launched to perform surveillance of the earth’s surface for intelligence and threat-tracking purposes.

Anand’s announcement comes amid numerous warnings from U.S. and Canadian military officials and experts that Norad is badly showing its age.

In an interview with The Canadian Press, Andrea Charron, one of Canada’s top experts on Norad and an associate professor at the University of Manitoba, said officials in Washington have been “at the end of their patience” waiting for Ottawa’s plans on continental defence, particularly in light of Russia’s invasion of Ukraine.

“They need Canada to do certain things,” Charron said.

Anand said Canada is committed to investing in technology that enhances the capability of commanders at Norad to make better decisions.

“These include modernizing command and control information systems, expanding Canada’s contribution to the Norad Pathfinder initiative that takes advantage of cloud-based computing and machine learning to ensure that NORAD commanders can make informed and rapid decisions,” she said.

Other initiatives include the procurement of advanced air-to-air missiles, and new F-35 fighter jets.