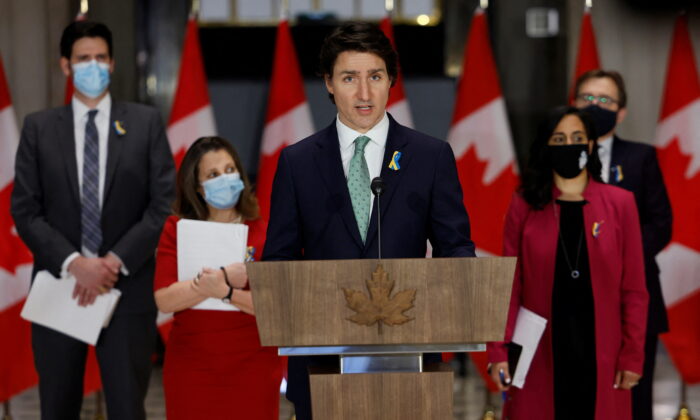 Trudeau announced the move on Twitter, saying that the sector accounts for more than one-third of Russia’s federal budget revenue.

He said the decision would be significant even though Canada “has barely imported any Russian oil and gas in recent years.”

“This move sends a powerful message,” he said.

He also told a press conference in Ottawa that the oil industry has “benefited President Putin and his oligarchs greatly.”

Trudeau also announced other measures in response to the escalating crisis in Ukraine. He said he intends to provide Ukraine with anti-tank weapon systems and upgraded ammunition, following its earlier shipments of military equipment.

Canada has also supported multiple sanctions against Russia, and backed Russia’s removal from the SWIFT system for international bank payments. Canada has issued sanctions against the Russia Central Bank, and all Canadian financial institutions are prohibited from engaging in transactions with the bank.

“We are providing even more lethal aid to Ukraine, and we’ll be sending 100 Carl Gustaf anti-tank weapon systems and 2,000 rockets, which we will be working to deliver as quickly as possible,” Canada’s Defense Minister Anita Anand said.

Trudeau also said that his government has asked that Russian state-owned broadcaster Russia Today, commonly referred to as RT, be dropped by the independent Canadian Radio-television and Telecommunications regulator.

“It is important that Canadians and people around the world be faced with accurate information,” Trudeau said.

On Sunday, Canadian cable operators said they would voluntarily drop the Kremlin-backed broadcaster.

Canada, alongside the EU, announced that they would close their airspace to Russian airlines on Sunday over Putin’s decision to launch a “special military operation” against Ukraine on Feb. 24.

Russia responded Monday by shutting off its airspace to carriers from 36 nations, including Canada.

Delegations from Russia and Ukraine engaged in six-hour long negotiations on the bank of the Pripyat River on Monday.

The outcome of the talks remains unclear at this stage, with the Ukrainian presidency saying in a statement that discussions would focus on “an immediate ceasefire and withdrawal of troops from the territory of Ukraine.”

The Russian delegation head, Vladimir Medinsky, said both sides had “agreed to keep the negotiations going.”

The two sides are set to meet in the coming days and continue talks, according to the Ukraine-based Interfax news agency.