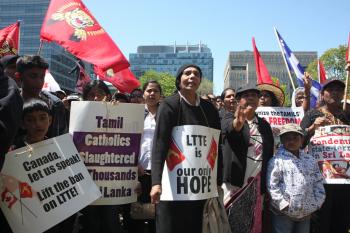 Tamil protesters rally in front of the Ontario parliament in Toronto on Wednesday. The activists, who have taken Toronto by storm in recent weeks, are calling for a ceasefire in Sri Lanka. They also express support for the Tamil Tigers, which Canada consi (Jason Loftus/The Epoch Times)
US

OTTAWA—As the Sri Lankan government makes a final push to crush the Tamil Tigers, civilian casualties are mounting and passions among Toronto’s 200,000 Tamils, the largest Tamil diaspora in the world, are running high.

Tens of thousands of Tamils rallied in Toronto Wednesday, waving the flag of a listed terrorist organization and decrying the deaths of friends and family in the island nation.

"When I hear the news I feel the pain," says Priyangh Nallaratnam, a spokesperson for the community-based protests. The university student said reports of daily casualties and stories shared from direct connections with friends and family in Sri Lanka are leaving Canadian Tamils feeling desperate.

“Tamil people are suffering a lot," he said, citing a lack of food, medicine and shelter. The United Nations estimates that as many as 50,000 civilians may be trapped in the less than two-square-mile (five-square-kilometer) area where the Tigers remain. Casualty estimates vary widely but the U.N. estimates more than 6,500 civilians have died in the fighting.

"I can't keep watching this."

He said Canadian Tamils are demanding the Canadian government call for a ceasefire and expel Sinhalese diplomats. They also want the international community to pressure the Sri Lankan government to let media and NGOs into the region.

At the largest of the Tamil protests in Toronto in March an estimated 75,000 formed a seven-kilometre human chain around downtown Toronto.

As many were predicted to show up again yesterday, but only an estimated 20,000 to 50,000 arrived. The crowd moved south just after rush hour and shut down sections of downtown roads.

There were fears earlier in the week that protesters would again block major Toronto highways, an exasperating move for many Torontonians who drive in the notoriously congested city.

Support for the Tigers

For many of the protesters, the Tamil Tigers, known as the Liberation Tigers of Tamil Eelam (LTTE,) are seen as the only organization that protects the interests of Sri Lanka’s Tamil minority, which has been subject to discrimination in the island nation for decades.

But that protection has come at a price. The violent methods of the Tigers, which experts say have not abated even as the government has reformed discriminatory legislation, has led the international community to label the group a terrorist organization.

The Tigers were officially labelled a terrorist organization by the Canadian government in 2006. The group has admittedly used child soldiers (even after promising to stop in 2003) and carried out hundreds of suicide bombings. The group has also reportedly forced Sinhalese and Muslim inhabitants out of territory it controlled. In 1999, the Tigers were accused of killing women and children in a pre-dawn attack on a Sinhala village.

The Tamils formed in the 1970s in response to discrimination at the hands of the Sri Lankan government. The conflict has its roots in social tensions left after Britain granted the country political independence in 1948.

The Tamils, a minority in the country, were a favoured people of the British, testified Dr. Elliot Tepper, a distinguished Sri Lanka researcher at Carleton University, before the Canadian foreign affairs parliamentary committee in late March.

“The talented [Tamil] minority community took very quickly to English education,” he said, which led to better positions in the government.

Almost a decade after independence a new party formed that “stormed to power under the banner of Buddhist nationalism and Sinhala language superiority,” explained Tepper.

The new government then imposed a number of measures that favoured the ethnic majority, to the detriment of the Tamil minority, including a constitutionally-enshrined duty to protect Buddhism and language preferences that marginalized Tamils. Tamils, who are mainly Hindu and Muslim, were also required to score higher than Sinhalese to gain entrance to universities.

“Today we see the long-term results of this political history—a defensive movement by the Tamil population to overcome discrimination, a movement that has shifted from being a moderate and constitutional one to a violent separatist and terrorist one under the leadership of the LTTE.”

Raj Thavaratnasingham, a Canadian Tamil and executive committee member for the Association of Sri Lankan graduates of Canada (which is almost entirely comprised of Tamils) likens the Tamils to a violently protective big brother.

He said the situation is like living on a street where some people from further down come up and beat and intimidate friends and family. One day, an older brother gets angry and shoots some of those people, a violent but admired act by the former victims.

"I am not saying what they did was good, but that is how the Tamil people see it. Most of us do condemn the violence that is perpetrated by the Tigers but they are the only people defending the Tamils,” he said.

In the current conflict, Mr. Thavaratnasingham, a Tamil himself, said the government has gone beyond reasonable force.

"It is like some 50 people taking hostage so they blow up the whole building…That is what is happing in Sri Lanka right now."

He pointed to a May 5 Channel 4 News (of Britain) report that had video from a displacement camp where Tamil refugees are forcibly confined by the Sri Lankan government. The report claimed dead bodies were left where they fell and there were widespread food shortages and instances of sexual abuse. The Sri Lankan government denies the allegations.

The Tigers are accused of restraining civilians in conflict areas, but Mr. Thavaratnasingham said many also choose to remain because of how they are treated by the Sri Lankan government.

At least 50 people were killed when a hospital was shelled yesterday. Human Rights Watch has accused both sides of using the civilian population as “cannon fodder.”

In an interview yesterday, Dr. Tepper noted that the Sri Lankan government’s immanent defeat of the LTTE could be temporary given the group’s extreme resilience in conducting guerilla warfare.

At this critical juncture he said it is essential to separate essential humanitarian support for the Tamil people from any kind of political support for the LTTE. He thinks the current protests in Canada and elsewhere blur that distinction which works in favour of the LTTE.

Lasting peace, suggests Tepper and others, will demand a change from a violent Tamil insurgency to a mainstream political force, something most observers do not think is possible while the Tamils charismatic leader, Velupillai Pirapaharan, still lives.

Dr. Tepper points to one group of Tamils that broke from the LTTE and formed a mainstream political party in Trincomalee, contesting and winning an election to become the highest civil authority.

"The trick is to find a way to support the people without giving the organization another chance to survive and fight on for another day."