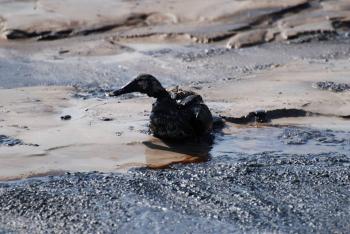 One of the ducks that landed in Syncrude's tailings pond. Five ducks survived and were taken to a wildlife rehabilitation centre outside Edmonton for treatment. (Court handout)
International

Joan Delaney
Senior Editor, Canadian Edition
Joan Delaney is Senior Editor of the Canadian edition of The Epoch Times based in Toronto. She has been with The Epoch Times in various roles since 2004.
View profile
Follow
biggersmaller
Print
Oil sands giant Syncrude Canada is in an Alberta court this week for the beginning of its trial over the 2008 deaths of 1,600 ducks in one of its tailings (waste material) ponds. Syncrude faces one charge under the federal Migratory Birds Convention Act and another charge under the Alberta Environmental Protection and Enhancement Act.

The 1,600 ducks died in Syncrude’s tailings pond in Fort McMurray, northern Alberta, in April 2008. They sank to the bottom of the pond after becoming coated in oily sludge. It was initially estimated that 500 birds had died, but a revised total was released last March.

Provincial wildlife biologist Todd Powell told the court that roughly a dozen ducks were shot on the tailings pond the following day as he deduced they were unlikely to survive. “There was no chance they could be saved,” he said.

The company has pleaded not guilty to all charges brought by both the federal and provincial governments. The Crown alleges Syncrude was negligent in its responsibility to protect the migratory birds.

In the St. Albert courtroom on Monday, Syncrude lawyer Robert White said the incident was a mistake, not a criminal offense. “There's no question that the settling basin and its contents was the reason that these birds died and there is no question at all but that the settling basin is Syncrude's responsibility and is morally culpable, but they are not guilty of criminal offenses,” he said.

On Tuesday, the court was shown photographs and videos of the bitumen-covered ducks trapped in the tailings pond. Outside the courtroom, White criticized photos of some of the ducks being attacked by ravens as "showboating," adding that the pictures were "a terrible thing to see".

White said Syncrude did everything in its power to live up to its responsibilities. He also argued that the proceedings should go ahead on only one charge since the provincial and federal charges are alike and a defendant cannot be convicted of the same charge twice.

The court will hear from the first-responders to arrive at the scene after the ducks landed on the almost 2 mile-wide pond, as well as from Syncrude employees.

At the time of the incident, Syncrude said that the air cannons it normally uses to scare away birds were not operating because of severe weather conditions, and the birds migrated earlier than usual. The company, which has apologized, said it has since improved bird deterrent techniques, including using a radar system to detect birds that may migrate early.

Environmentalists are watching the trial closely, hoping it will lead to stricter rules for tailings pond operators. “This case sparked international attention and I think it’s because it’s vastly exposed to the world that what many environmentalists were claiming about the toxicity of these waters was proven true,” says Sierra Club Prairie Director Lindsay Telfer.

“This incident showed just how toxic the [tailings ponds] are, that they are lethal, and there are significant concerns going beyond this case in and of itself, particularly with the leakage rates into the ground water and into the Athabasca [River] and its tributaries,” she said.

Telfer notes that in laying out its argument, the Crown essentially indicated that under the federal Migratory Birds Convention Act, the tailings ponds themselves are illegal. According to Telfer, this argument could bode well for change down the road, “Depending on how the court takes that and interprets it, then there could be significant changes coming out of that,” she said.