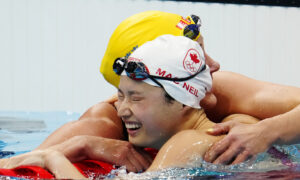 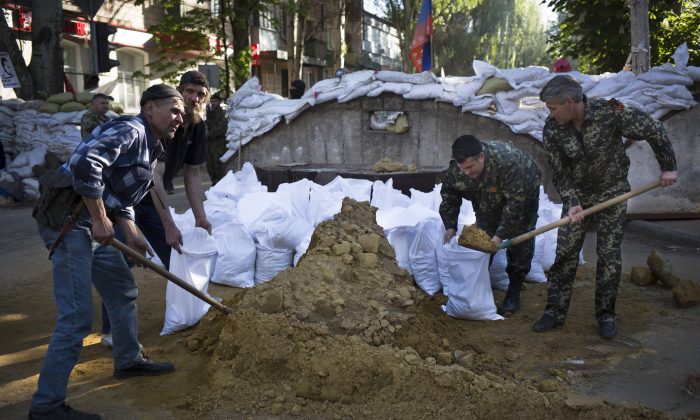 Pro-Russian activists strengthen the barricades in front of the Ukrainian regional office of the Security Service in Slovyansk, Ukraine, May 7, 2014. International Trade Minister Ed Fast says Russia should not be a member of the OECD until it backs off from its aggressive stance on Ukraine. (AP Photo/Alexander Zemlianichenko)
Canada

OTTAWA—Canada has thrown its support behind a decision by the Organization for Economic Co-operation and Development to delay Russia’s entry to the group.

International Trade Minister Ed Fast says Russia should not be a member of the 34-country OECD until it backs off from its aggressive stance on Ukraine. Russia has been negotiating entry into the organization since 2007.

“The Putin regime’s military aggression and illegal occupation of Ukraine threaten the stability and security of Central and Eastern Europe,” Fast said Wednesday at an OECD ministerial meeting in Paris.

“Those actions clearly contravene the overriding principles and fundamental values that OECD members have committed to uphold. Indeed, those actions have become a very real threat to global security.”

He said Canada will continue to work with allies to keep up the economic and political pressure on Russia.

He said Russia’s occupation of the Crimean peninsula and its continued aggression against Ukraine are at odds with all the OECD’s values. Pro-Russian gunmen continue to destabilize eastern Ukraine.

Russia’s actions in Ukraine have led to it being booted out of a number of international organizations including the reconstituted G7.

NATO has also severed all relations with Russia as it bolsters its forces in Eastern European countries. Canada has lent a warship, troops and fighter jets to the NATO effort and has also imposed several rounds of economic sanctions on Russia.

Fast said Canada will continue to block Russia’s succession to the OECD “until the Putin regime clearly demonstrates its respect for Ukraine’s sovereignty and territorial integrity.”

“I believe that the OECD can and will play an indispensable role in supporting Ukraine’s economic reform efforts, as it has for so many other countries in Eastern Europe.”

He also noted that two of Russia’s nervous neighbours, Lithuania and Latvia, are making progress on their eventual accession to the OECD.

The United States and some European countries are stepping up their diplomatic efforts as Ukraine’s May 25 presidential elections are looming.

Meanwhile, Putin said at a news conference in the Kremlin on Wednesday that Russia has pulled back its troops from the Ukrainian border. He urged insurgents in southeast Ukraine to postpone their referendum on autonomy planned for May 11.