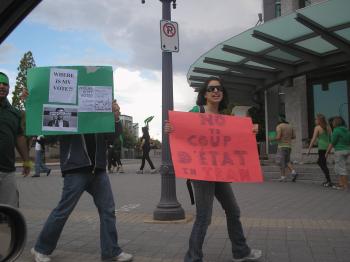 KINGSTON, Ontario—Carrying placards that read, “Where is my vote?” and “This is a selection, not an election,” Iranian students at Canada’s Queen’s University gathered on Monday to protest the June 12 election results in Iran.

The demonstrators said the election, which former president Mahmoud Ahmadinejad won by a landslide, was fraudulent and that the opposition leader, reformist Mir-Hossein Mousavi, was the clear winner.

“We feel we have been cheated. The election result was stolen by the government. This is a military coup by Ahmadinejad,” one protester said.

Another protester, Sina Tahamtan, said that although the exact number of votes the opposition leader Mousavi had received was not known, he was by far the most popular candidate.

“The majority of the people we believe voted for a reformist candidate,” he said.

After Ahmadinejad was announced the winner with over 60 percent of the votes, thousands of protesters took to the streets in Tehran, accusing the government of massive vote rigging.

“How was it that the Iranian government came out with the results two hours after the election ended—it’s impossible,” said Tahamtan.

“We want to show our solidarity to our Iranian friends and families back home who are being persecuted, jailed and assaulted violently because [they exercise] their God-given right to protest for their human rights.”

He said that inside Iran, all telecommunications have been shut down.

“Our voices and concerns have not been addressed. Many of the reformist candidates including Mousavi have been under immense pressure to concede and to accept the election results,” Tahamtan said.

He added that Iranian students at Queen’s will continue to “remain vigilant and to protest peacefully and legally for our given right.”

With large demonstrations occurring in Iranian, the Supreme leader Ayatollah Ali Khamenei, who initially denied allegations of election fraud, has called for investigations into allegations of vote rigging.

Hopes for a peaceful resolution to the election dispute faded after a violent crackdown on demonstrators in Tehran on Monday with eight fatalities.