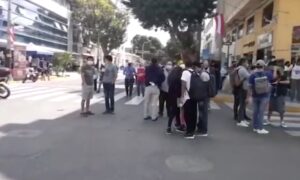 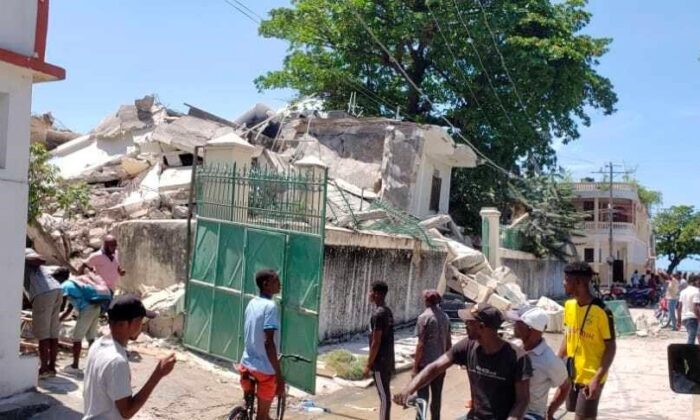 People stand outside the residence of the Catholic bishop after it was damaged by an earthquake in Les Cayes, Haiti, on Aug. 14, 2021. (The Canadian Press/AP-Delot Jean)
Canada

Canada is prepared to help Haiti after the Caribbean nation was struck by a deadly 7.2 magnitude earthquake, Prime Minister Justin Trudeau said Saturday.

“Our hearts go out to those who have lost loved ones, and those who have been injured—and we’re standing ready to provide assistance in any way we can,” Trudeau wrote on Twitter.

Haiti’s civil protection agency said the number of deaths from the quake now stands at 227, noting that hundreds are also injured and missing. Search and rescue teams were being deployed amid reports of widespread destruction.

Haitian Prime Minister Ariel Henry said he wouldn’t ask for international aid until the extent of the damage was known.

The U.S. Geological Survey said the quake’s epicentre was about 125 kilometres west of the capital of Port-au-Prince.

Henry declared a one-month state of emergency affecting the whole country, saying Saturday that some towns were destroyed, local hospitals were becoming overwhelmed and the need was “enormous.”

He also repeated Trudeau’s commitment to help in the aftermath of the disaster.

“We are very saddened by the news of an earthquake in Haiti,” Garneau wrote on Twitter.

“We offer our condolences to the victims’ loved ones and wish the injured a speedy recovery. Canada is standing ready to assist the Haitian people.”

Global Affairs Canada did not immediately confirm whether any Canadians had been affected.

Canada issued advice to travelers on Saturday, warning of reports of infrastructure damage, potential aftershocks from the quake and disruptions to essential services. The government said people in affected areas should follow local authorities’ instructions and monitor local media for updates.

Ottawa has sent $1.5 billion to Haiti since a devastating earthquake struck the country in 2010.

Former Canadian governor general Michaelle Jean, who is from Port-au-Prince, expressed sadness at the news which comes at during a period of instability for the country.

The humanitarian group Save the Children said in a statement that it was extremely concerned about the impact of the disaster on children and families, who it said were already suffering extreme poverty, hunger and violence.

“Staff in the region are seeing horrific devastation—dozens of collapsed houses, numerous injured people and fatalities,” Leila Bourahla, Save the Children’s Haiti country director, said in the statement.

“While it will take days to assess the full scale of the damage, it is clear that this is a massive humanitarian emergency. We must respond quickly and decisively.”