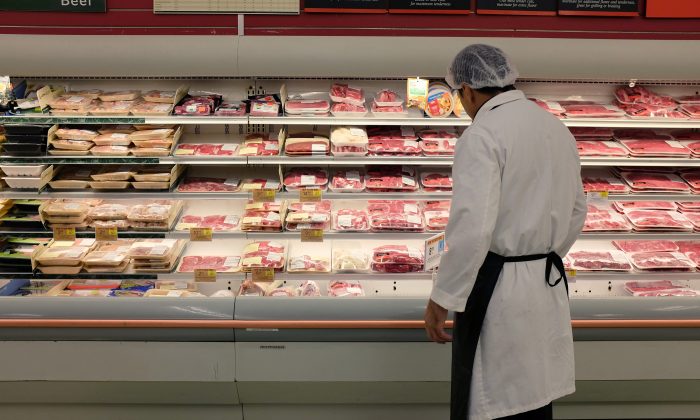 Meat is displayed in a case at a grocery store July 8, 2014, in Miami, Florida. Russia’s ban on U.S. and Canadian agriculture products is aimed at boosting domestic production as much as punishing countries that imposed economic sanctions. (Joe Raedle/Getty Images)
Business & Economy

OTTAWA—Russia this week announced its counterstrike in response to Western countries that have levelled increasingly wider sanctions against it for its attacks in Ukraine.

On Thursday, Russia’s prime minister announced a one-year import ban on most agriculture products from the European Union, the United States, Australia, Canada, and the Kingdom of Norway.

Russia’s import ban is a two-pronged strategy. It is meant to hurt those countries that have supported the sanctions, while increasing domestic agriculture production, one of the country’s long-term goals.

Russian Prime Minister Dmitry Medvedev explained the bans during a government meeting in Russia on Thursday.

“The retaliatory measures that we are introducing will essentially open up shop shelves for domestic producers,” Medvedev said, according to the transcript of the meeting.

“Where we are lagging behind is in certain kinds of meat and milk. We should fill in the gap on our own, and our farmers are ready to do this, especially with our help.”

Russia has been working on a strategy to develop certain agriculture sectors, making the current ban a convenient way to limit competition.

It is also considering bans in other areas such as shipbuilding, aircraft, and the auto industry. If Russia expands its sanctions, Canada’s sizeable exports in manufactured goods like machinery and aircraft could be affected.

One of Canada’s largest exports to Russia, across any category, is pork—accounting for 20 percent of exports to Russia last year. If the ban had not interrupted this business year, Canada would have expected to send half a billion dollars in pork to Russia by the end of the year.

Despite Russia being Canada’s fourth largest pork importer, the Russian market is not critical to the industry, says Canada’s leading association of meat producers.

“We do have a lot of other markets at the moment. Pork supply around the world is very tight, so we should be able to redirect products and fill demand from other sources,” said Jim Laws, Executive Director of the Canadian Meat Council.

Luckily for Canadian producers, feed is unusually cheap at the moment and prices have reached record highs.

“If it had to happen, this was the ideal time to happen,” Laws said.

However, Laws did say they were hoping pork would not be on the ban list.

Canada’s exposure to Russia’s market has been somewhat limited since April last year when Russia raised the technical requirements on imported meat products. The changes made it nearly impossible for Canada to export beef, but pork producers fought hard to meet Russia’s demands, and eventually succeeded.

Right now there is between US$23 million and US$46 million worth of Canadian pork en route to Russia, and it remains to be seen if Russia will accept it or send it back.

The Russian Embassy in Ottawa did not respond to questions about the fate of those shipments, but statements from the prime minister indicate that those shipments could be returned.