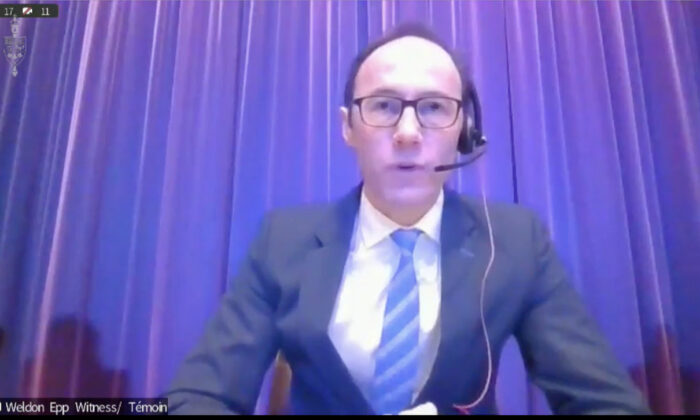 Weldon Epp, director general for Global Affairs Canada's North Asia and Oceania Bureau, testified on the situation of the Taiwan Strait before the House of Commons Standing Committee on Foreign Affairs and International Development on Feb. 14, 2022. (ParlVU/Screenshot via The Epoch Times)
Canada

Canada “remains very concerned” with China’s destabilizing military incursions toward Taiwan, and should be “creative” in working with the self-ruled island in international organizations and other platforms, a senior Foreign Affairs official said.

Weldon Epp, director general for Global Affairs Canada’s North Asia and Oceania Bureau, made the remarks on Feb. 14, when testifying before the House of Commons Standing Committee on Foreign Affairs and International Development on the current situation in the Taiwan Strait and the South China Sea—regions where communist China is proactively seeking to dominate.

“In the past four months, we’ve observed a significant increase in military activity, including over 600 incursions into Taiwan’s self-declared Air Defense Identification Zone by the PLA [People’s Liberation Army] Air Force. And whatever the motivations, Canada believes these moves threaten regional security and only serve to push back at the possibility of dialogue and cooperation across the Taiwan Strait,” Epp said.

“Canada has communicated directly to the Chinese authorities its concerns about destabilizing military actions across the [Taiwan Strait], while reiterating Canada’s strong support for constructive efforts that contribute to peace and stability in the region.”

Beijing has long considered Taiwan to be a breakaway province, despite the fact that Taiwan is a de facto independent country, and has ramped up military coercion toward the island since March 2019, sending military aircraft into Taiwan’s Air Defense Identification Zone (ADIZ).

Epp told the committee that there are increasing concerns about China explicitly setting a timeline to achieve what it calls a “national rejuvenation” by 2049, which Epp said “would definitely include reunification with Taiwan.”

On Oct. 21, 2021, U.S. President Joe Biden committed to defending Taiwan if the self-ruled island was attacked by China. When asked if Canada would also be ready to intervene militarily under such a scenario, Epp said the government is “watching closely,” drawing a comparison with Russia’s potential incursion into Ukraine.

“There is a risk that developments in Ukraine present a sort of unwelcome natural experiment, if you would, that will allow various parties to watch closely and see what the effectiveness of different diplomatic tools are to respond to in a very alarming situation,” Epp said.

While refusing to comment on the “hypothetical” future scenarios of what response Canada would take under a Chinese invasion of Taiwan, Epp noted the Canadian government is “alive” to the various operations that Beijing is taking against the island.

“Because China, in its own words, has never ruled out, never precluded using force to reunify with Taiwan, Canada is deeply concerned by recent activities,” he said. “Those increasing activities by the PLA Air Force—not just overt activity by the military—but also what we would call ‘below threshold activities,’ that include things like cyberattacks, interference, united front tactics.”

“We’re alive to all of those, and we will continue to monitor those together with partners, and to continue to encourage both sides to step back from provocative actions, particularly the Chinese side.”

Jordan Reeves, executive director for the Canadian Trade Office in Taipei, who also testified before the Foreign Affairs committee, said the Chinese Communist Party’s clampdown on Hong Kong’s democracy movements in recent years also has “profound impact” on how the Taiwanese view a Chinese takeover.

“The Hong Kong reality of what happened with the national security law basically told most Taiwanese that ‘one country, two systems’ was clearly out, it was no longer an option for the majority of Taiwanese,” Reeves said, referring to the principle that stipulates Beijing give Hong Kong relative autonomy after the former British colony was returned to Chinese rule.

Responding to Liberal MP Hedy Fry’s questions about Canada’s long-term strategy regarding what she described as China and Russia’s “global movement to get rid of democracy,” Epp referred to Prime Minister Justin Trudeau’s mandate letter to Foreign Affairs Minister Mélanie Joly, instructing her to develop an “Indo-Pacific strategy” aimed at deepening the “diplomatic, economic, and defence partnerships and international assistance in the region.”

Epp told the House committee that the strategy is still “under development,” and didn’t say when it will be released.

He also said the strategy will be made public once it is ready, only to clarify later that it will be up to the government to decide whether to publicize the contents.

Epp said that while Canada has supported Taiwan’s inclusion in international organizations such as the World Health Assembly and the International Civil Aviation Organization, it is important to incorporate Taiwan through other platforms such as the Global Cooperation Training Framework (GCTF) program—a platform that Taiwan uses to promote good governance throughout the Indo-Pacific region.

“Rather than only working to include Taiwan more meaningfully where it should be and where our interests require it in international organizations, we also need to be creative in working with Taiwan and other partners through platforms like the GCTF to amplify its experiences,” he said.