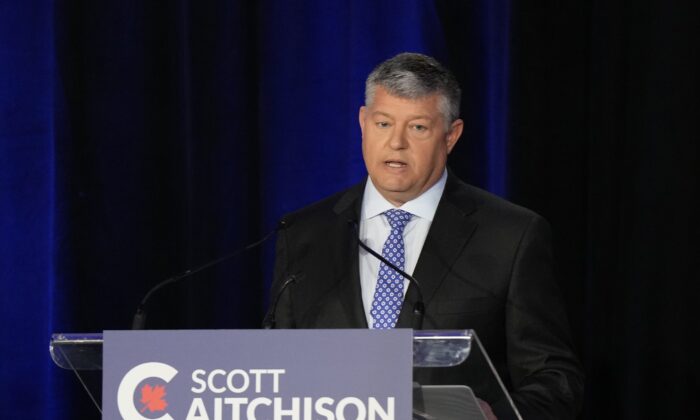 Time to recognize the 'One China' policy has failed, he says
By Isaac Teo

Conservative leadership candidate and MP Scott Aitchison says it’s important to recognize Taiwan as a sovereign state, and that the “One China” policy has been a “failure.”

“Taiwan is a vibrant democracy right next door to the behemoth communist regime of China. They’re constantly under [the regime’s] bully tactics and threats, and yet, that’s a beacon to the world,” Aitchison told The Epoch Times in an interview.

Aitchison, who represents the riding of Parry Sound-Muskoka in Ontario, says the “One China” policy which sought to acknowledge the Chinese Communist Party as “the sole legitimate government of China” and says that Taiwan is a part of China, simply doesn’t work.

“It’s also time for us to recognize that the One China policy has been a failure,” he said.

“For the better part of 50 years, Canada’s and Western foreign policy was premised on the basis that increased trade and prosperity with China would lead to greater adherence to human rights and liberalization of communism’s harsh edges,” he said in a statement on June 21. “We were wrong.”

Canada’s current policy with Taiwan does not acknowledge its sovereignty and does not maintain official diplomatic relations with it.

“Consistent with its One China policy, Canada maintains unofficial but valuable economic, cultural and people-to-people ties with Taiwan,” the government said on its website.

In his statement, Aitchison said he would work with Canada’s allies and trade partners to welcome Taiwan into trade agreements and support the country’s efforts to join international organizations should he be elected prime minister.

Aitchison stressed that Canada shouldn’t be naive when dealing with authoritarian states, and should instead act boldly to ensure the freedom of future generations to come.

“China is a threat to the liberal international order. That’s a fact,” he said in the interview.

“And unless Canada and countries that share our values come together—unless we stand up against the Chinese Communist Party’s aggression and human rights abuses—our security and prosperity is under threat as well.”

‘Our Allies Are Forming New Alliances Without Us’

“Things like the banning of Huawei—all our allies had done that some time ago, and it took us too long,” he said. “Our allies are forming new alliances without us because we’re not a reliable partner.”

Canada’s ban on Huawei was announced on May 19. The move came after all its Five Eyes intelligence partners had either banned or announced a phasing-out of Huawei’s equipment by their domestic wireless carriers. The Five Eyes alliance includes Australia, New Zealand, Canada, the United Kingdom, and the United States.

On Sept. 15, 2021, the White House announced the establishment of AUKUS—a defence pact between Australia, the UK, and the United States—to “deepen diplomatic, security, and defense cooperation in the Indo-Pacific region.”

Prime Minister Justin Trudeau downplayed the exclusion of Canada from the pact during an election campaign stop in Montreal the next day.

“We continue to be strong members of the Five Eyes, and continue to share information and security approaches with our partners,” Trudeau said when asked if Canada will lose in terms of defence intelligence if it’s not part of the alliance.

“This is a deal for nuclear submarines, which Canada is not currently or any time soon in the market for; Australia is,” Trudeau said.

Aitchison says the job of a prime minister is to foster healthy relationships with allies and partners.

On June 20, Defence Minister Anita Anand announced that the federal government will invest $4.9 billion over the six years to upgrade NORAD (North American Aerospace Defense Command), a joint command system for Canada and the United States that provides aerospace warning and protection to the continent.

In an interview with The Canadian Press, Andrea Charron, one of Canada’s top experts on NORAD and an associate professor at the University of Manitoba, said officials in Washington have been “at the end of their patience” waiting for Ottawa’s plans on continental defence, particularly in light of Russia’s invasion of Ukraine.

Aitchison says he is opposed to the Liberals’ online streaming act, Bill C-11.

“In the previous parliament, I served on the heritage committee, and we fought back against their online censorship. And we’re continuing that fight now,” he said.

Bill C-11 passed the third reading in the House of Commons on June 21 with a vote of 208–117, with the Liberals, NDP, and Bloc defeating the Conservatives and Green MP Mike Morrice, who voted against it. The bill is now before the Senate.

In a tweet on June 16, Sen. Leo Housakos said the senate will conduct a full study of the bill regardless of the Liberals’ push to rush it through parliament.

“The Trudeau gov’s attempts to circumvent the democratic process and ram through flawed censorship Bill #C11 with no discussion or debate should outrage every Canadian,” Housakos said.

Aitchison, who joined federal politics in 2019 noted that Canadians are “desperate” for leadership that delivers solutions instead of engaging in divisive politics.

“It’s one of the things that I’ve been calling out regularly since getting to Ottawa, that the partisan bickering back and forth and the vitriol we hear in Ottawa, Canadians are sick and tired of [it],” he said.

“They actually want to hear solutions to the problems they face every single day, not calling each other names.”

With economic growth and affordability as his top priorities, Aitchison said if elected, his government will look into creating more jobs for Canadians, attracting immigrants with the right skills to the country, and exporting Canada’s ethically produced oil and gas to the international market.

“So we need to lead with respect and show Canadians a better way to govern and that we can be trusted to do it,” he said.

Omid Ghoreishi and The Canadian Press contributed to this report.