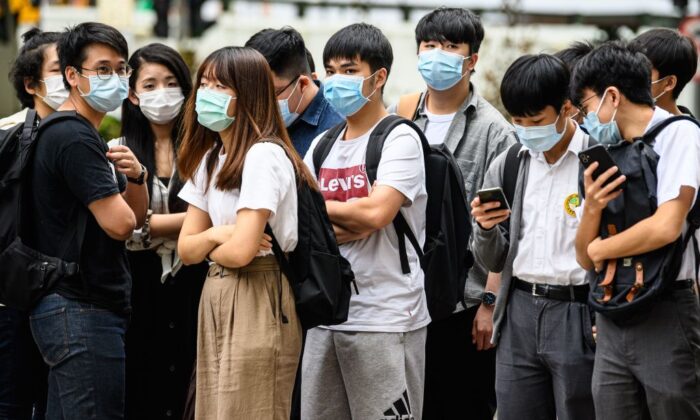 Canada should be prepared for “large numbers” of asylum seekers to arrive from Hong Kong in the coming months, the Canada-China committee heard on Nov. 9.

Mabel Tung, chair of the Vancouver Society in Support of Democratic Movement (VSSDM), an organization that has been helping Hong Kong pro-democracy protesters obtain refugee status, told the committee that dozens of Hong Kongers are already making arrangements to come to Canada and more will follow once border restrictions are lifted.

“Already 46 Hong Kong citizens, many of whom took part [in] past [pro-democracy] demonstrations, are seeking asylum in Canada, citing harassment and brutality at the hands of police and fear of unjust persecution,” she said.

“We expect this number to increase once our border is open to foreign visitors.”

Many pro-democracy activists are now looking to Western countries for safe harbour as they fear they will “suffer the same fate” as the students who took part in the Tiananmen Square protests in 1989, said Tung, noting several young Hong Kongers who VSSDM has helped seek political asylum in Canada are suffering from Post Traumatic Stress Disorder.

“Their situation is one of struggle and hardship,” she said.

Yet, Tung warned that their arrival in Canada does not necessarily guarantee their freedom from the Chinese regime’s pressure, as the Chinese Communist Party (CCP) has sought to infiltrate “every corner” of Canadian society.

The CCP’s efforts to influence the Chinese diaspora through its United Front Work Department’s campaigns, for example, are particularly pervasive, she said.

“In the past 50 years, many Chinese immigrated overseas to escape political persecution, seeking new opportunity, or reunite with family. But the CCP treats the overseas Chinese as the intangible asset for trade, cultural exchange, technology know-how, and to influence foreign governments,” Tung said.

She pointed to advertisements recently published in local Chinese-language media supporting Hong Kong’s national security law as an example of Beijing’s reach into Canada’s Chinese community. The ads were sponsored by the Chinese Benevolent Association and National Congress of Chinese Canadians—both which have branches across Canada and claim to represent Chinese and Hong Kong Canadians.

Tung said the purpose of the ads was “to create the illusion that local Chinese communities support the law, even though the law is against our Canadian value of freedom of speech and expression.”

She said she has also seen a chilling effect on pro-democracy activities in Canada since the national security law went into effect in Hong Kong, with fewer people attending rallies or concealing their identities more carefully, due to fear their families in China and Hong Kong could be harassed by authorities.

“A large number of Canadians, on our Canadian soil, they are scared,” she said.

Several expert witnesses told the committee of growing fear among pro-democracy activists, as Beijing seeks to assert its dominance in Hong Kong with increasing aggression.

The intimidation, and ultimately self-censorship of activists is exactly what the draconian national security law aimed to achieve, as large-scale protests in Hong Kong became commonplace in recent years, said Steve Tsang, director of the SOAS China Institute at the University of London.

“It was done deliberately to intimidate people in Hong Kong to make sure that they get the message and stop protesting, or from [Beijing’s] perspective, stop rebelling,” Tsang said.

“Also from [Beijing’s] perspective they have succeeded—the older generation pro-democracy activists in Hong Kong have gone quiet or chosen to retire. The younger people have been sufficiently intimidated that we are not seeing the kind of massive protests and demonstrations in Hong Kong [as before].”

Adam Nelson, Senior adviser for Asia-Pacific at the National Democractic Institute (NDI), said the “fundamental challenge” with the national security law is its broad application.

“The law can and is now being used for whatever Beijing and Hong Kong’s leadership needs it to be. They will fit any action—whether peaceful protests or criticism—into the law,” he said, adding that democracy in Hong Kong has been eroded in a variety of ways, from suppression of independent media to the harassment of legislators and arrest of activists in the streets.

“Some have found the operating environment so fearful that they have fled the city to the U.K., Europe, Taiwan, the U.S., and of course Canada.”

When asked by Conservative MP Pierre Paul-Hus if he feared for his own safety if he were to travel to Hong Kong, Nelson said he would “not feel safe” going to Hong Kong now and was followed on his last trip to the city with NDI.

“We were followed from the arrival in the airport. People took our pictures, they took our pictures as we were having meetings around the city … and then they would put those into mainly Beijing-run newspapers. It’s done in an effort to scare, to intimidate.”

Nelson and other experts urged Canada and the world to urgently persist in efforts to pressure China on its human rights abuses in Hong Kong.

Tsang said Western democracies with citizens in Hong Kong should coordinate their strategies while making it clear to Beijing they have a plan in place to protect those individuals should the Chinese regime act out against them.

Nelson said countries including Canada could consider a “lifeboat” plan to get citizens and refugees out of Hong Kong as quickly as possible if need be.

Tung said there are several other measures Canada can take to protect national interests against the Beijing regime, such as banning Huawei; imposing Magnitsky sanctions on Chinese and Hong Kong officials directly implicated in human rights abuses in Hong Kong, Tibet, and Xinjiang; monitoring the activities of the United Front Work Department; and banning Beijing-run Confucius Institutes from schools.