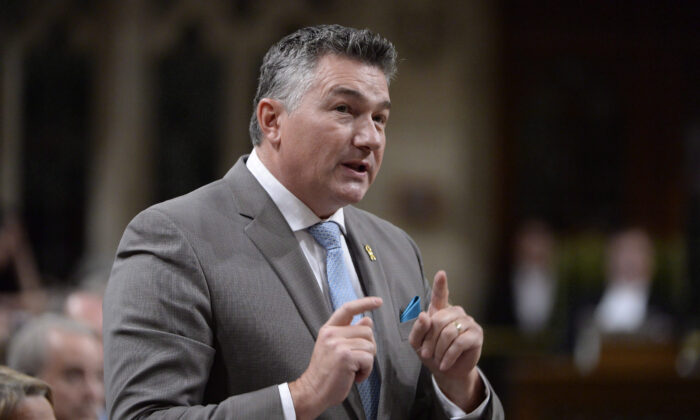 As the world grapples with the COVID-19 pandemic, several MPs say Canada should join its allies in calling for an international, independent inquiry into the Chinese Communist Party’s handling of the outbreak and hold the regime accountable for its actions that led to the pandemic.

“An investigation has to take place, and we need to make sure that everybody understands the gravity of what’s happened and also start talking about the consequences that the Chinese Communist Party [CCP] will face,” MP James Bezan, the Conservative shadow minister for national defence, said in an interview.

“As long as the regime in Beijing withholds that type of information, it’s going to slow down the progress in getting a cure [for COVID-19] in place in time to save lives, and to allow us to get our economy back to normal,” he added.

“We need to work with other international organizations and allies in holding the government of China to account.”

Conservative MP Peter Kent, a former environment minister, agrees. He said that now is time for democracies, including Canada, to come together to hold China accountable for the pandemic against a backdrop of the regime’s many other ongoing human rights violations.

“International public opinion is demanding a reckoning for China, and I can only say it’s not happening soon enough,” he said.

“The democracies have to work together. They have to bring to the consciousness of those in power in Beijing that the world will no longer tolerate this belligerent, imperial, brutal human-rights abusing member of the international community.”

Both CCP and WHO Under Scrutiny

Last month, Australia’s Prime Minister Scott Morrison called on all World Health Organization (WHO) member nations to support an independent inquiry into Beijing’s handling of the outbreak, the virus’s origins and spread, as well as the WHO’s response.

U.S. President Donald Trump’s administration has also urged other governments to back the probe. This week the European Union’s 27 member states announced they would back the inquiry, and the EU will co-sponsor a resolution calling for an independent review when the World Health Assembly meets on May 18.

The calls come amid increasing evidence that Beijing deliberately concealed information about the virus for weeks, which allowed it to spread globally, while hoarding large amounts of personal protective gear, including two billion masks.

Questions are also being raised about the Chinese regime’s influence within the WHO, in light of the organization’s failure to warn other countries of early evidence of the Wuhan outbreak. WHO relied on questionable data from the regime and continued to praise its response to the outbreak.

Conservative MP Michael Cooper is among those looking for answers.

“There’s no question that there is Chinese influence on the WHO. And I would submit that, the WHO has allowed politics to override considerations of global public health,” Cooper said.

“Therefore, the WHO has failed to fulfill its mandate and has contributed significantly to the global catastrophe that we are dealing with today from a public health standpoint and all of the socioeconomic implications that followed.”

Canada has not said whether it will support an inquiry.

Health Minister Patty Hajdu said May 4 that the federal government will remain focused on navigating the country out of the COVID-19 crisis before investigating the origins of the virus. Hajdu stated previously that Canada is “open to” reviewing the WHO’s actions in response to the pandemic.

As Beijing’s mishandling of the outbreak comes under increased international scrutiny, the federal government has so far avoided any criticism of China or the WHO.

Cooper questioned why Canadian officials continue to stand by the Chinese regime and the WHO.

“In the face of a record of gross mismanagement, negligence, and I would dare say corruption by the WHO, it’s legitimate to ask the [Canadian] government why they would be taking such a stand.”

The Canadian government is in fact getting applause from the communist regime for its stand.

On May 1, China’s envoy in Ottawa, Cong Peiwu, praised Canada’s “cool-headed” cooperation on battling the pandemic and condemned the United States for “smearing” his country over COVID-19.

As reported previously by The Epoch Times, the Wuhan Health Commission originally stated that the first patient exhibited symptoms in early December but only revealed the outbreak to the public on Dec. 31, 2019. The authorities also initially denied that the disease could be transmitted between humans, although Taiwan officials said they warned the WHO of human-to-human transmission as early as Dec. 31 based on their own investigations.

As nations are forced to reflect on what type of relationship they will pursue with the CCP once the pandemic is over, some parliamentarians say Canada needs to seriously rethink its approach.

“Beijing needs to be held accountable for its actions at home and abroad, and not be treated as an ordinary member of the international community.”

Putting the interests of Canadians first in trade and security should be top priorities in future engagements with China, said Garnett Genuis, another Conservative MP.

He said this could include measures such as not relying on China for vital equipment but rather building up domestic supplies or partnering with trusted allies to do so. It could also include prohibiting Huawei from having access to Canada’s 5G infrastructure and abandoning any Canada-China free trade deal, he added.

“We need to not be naive. We need to recognize the priority that we put on our security and we need to be cautious.”

Shuvaloy Majumdar, a Munk Senior Fellow with the Macdonald-Laurier Institute, says part of the key to moving forward is for free countries to first acknowledge that the West’s “economic engagement” strategy with China has failed.

“The optimism for many years, by myself included, was that greater economic engagement with China, the development of its country, creating more literacy and services for its people, would also create greater demand for the rule of law, for property rights, for freedom of religion—all the things that are essential to succeed,” he said.

“But what has happened and become even more real … is that actually the CCP has sought to partner with the world for its own prosperity so that one day it could dominate the world with its own world order.”

Majumdar said he believes that “democracies would be very hard-pressed not to understand this ongoing threat by the irresponsible and reckless actions of the Communist Party.”

Democratic countries now have “ greater impetus to think through how to partner with each other and how to engage China without creating any space for submitting to China,” he added.