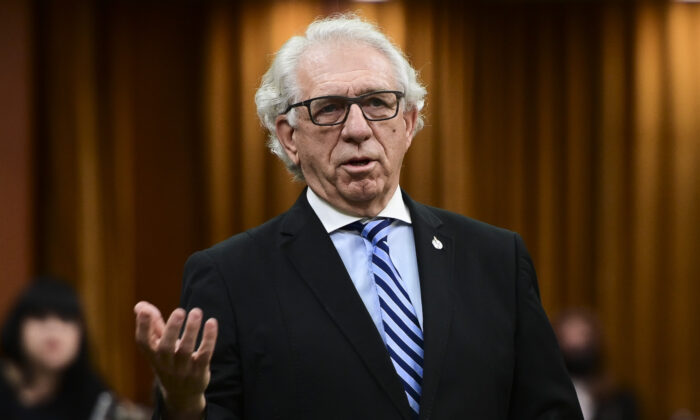 Conservative member of Parliament Larry Maguire rises during question period in the House of Commons on Parliament Hill in Ottawa on June 11, 2021. (The Canadian Press/Sean Kilpatrick)
Canada

“When you see the information that’s come out of the United States, you’d have to take it seriously,” Maguire said. “We need to have a parallel program to what the United States already has.”

“We need to identify the origins and the intent of these UAPs, and that certainly can’t hurt anything.”

Maguire made the remarks as two senior U.S. defence intelligence officials testified this week at a congressional hearing on May 17—the first hearing on the issue in a half-century—after the U.S.’s Office of the Director of National Intelligence released a report documenting 144 UAP sightings between 2004 and 2021.

Footage of the unknown flying objects were shown during the hearing, to which there is no explanation for what they are, testified Scott Bray, deputy director of naval intelligence in the UAP Task Force (UAPTF), the Pentagon body responsible for UAP investigations.

Bray said the task force’s database on UAP sightings has now grown to approximately 400 reports since the release of its preliminary assessment in June 2021.

During the hearing, Ronald Moultrie, who oversees the Pentagon’s newly-formed UFO research office, said the government is “open to any conclusions that we may encounter.”

On Feb. 16, 2021, Maguire and another Conservative parliamentarian were briefed by Luis Elizondo, a former U.S. Army counterintelligence officer who was reportedly in charge of a UAP research program before resigning from the Pentagon in 2017, CTV reported.

“Mr. Maguire is absolutely correct in his concern, because he knows that these reports do occur,” Elizondo told CTV News on May 17.

“I think the time has come for us to have an open and honest dialogue about this topic without fear of retribution, without stigma and associated taboo.”

Canada’s former defence minister Harjit Sajjan also received a UFO briefing in June 2021, ahead of the public release of an unclassified U.S. intelligence report on UFOs. The briefing slides, obtained by CTV through access to information, said there were roughly 1,000 UFO sightings reported in Canada each year.

In a recent op-ed, Maguire said the once-obscure subject is now being discussed by high-level military officials, and thus deserves serious attention from the Canadian government.

“For decades, the public has been told claims about UAP (what were once called UFOs) are either banal or altogether nonsense. It is now apparent there is something very real going on—something that warrants high-level briefings from military leaders,” he wrote.

“This deserves legitimate inquiries, and it is time to demand action from our government departments. Moreover, it’s time for them to engage with the scientific community in an open and transparent manner.”

Gary Bai contributed to this article.