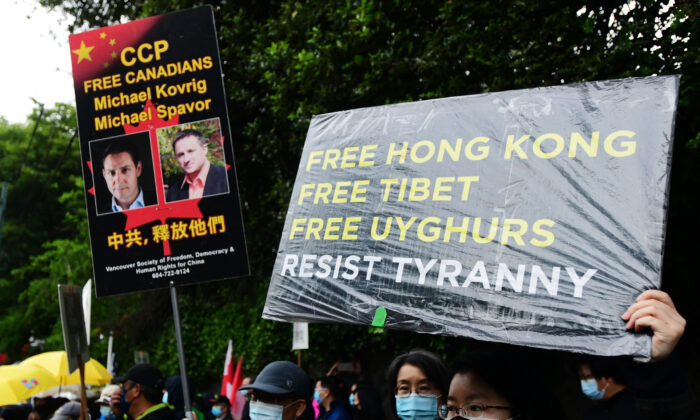 People attend a vigil commemorating the 32nd anniversary of the 1989 Tiananmen Square pro-democracy protests outside the Chinese consulate in Vancouver, Canada, on June 4, 2021. (Don MacKinnon/AFP/Getty Images)
Thinking About China

Canada Should Crack Down on Its Travel Trade With China

This is the second in a series on how Canada can prudently decouple from China.

Most Canadians are familiar with the nightmares endured by Michael Kovrig and Michael Spavor, the two Michaels imprisoned for almost three years because they were unlucky enough to be in China when Canada arrested Huawei CFO Meng Wanzhou in Vancouver.

Fewer Canadians are familiar with the case of Robert Schellenberg, a Canadian whose 15-year drug-related jail sentence was upped to death shortly after Meng’s arrest.

Almost no Canadians are familiar with the cases of some 115 Canadians who remain in Chinese jails. Often they are cut off from Canada’s consular services and even their families; often they have been placed in custody for arbitrary reasons; always they have been denied a fair trial.

Many languish in prison without even getting to court, where sentences can be handed down in a matter of minutes, without judges so much as allowing defendants to submit exculpatory evidence. One Canadian hasn’t been heard from in over a decade.

Because of Beijing’s penchant for incarcerating foreigners, travel in China is ever risky. Beijing might at any time seek to obtain leverage in a dispute with Canada by holding any convenient Canadian as a bargaining chip. But any Canadian who finds himself in a dispute with someone favored by the Chinese Communist Party (CCP) also needs to beware.

Numerous businessmen at odds with Chinese partners or clients have found themselves accused of wrongdoing. In purely commercial disputes, China has prevented businessmen from leaving the country for years.

Because of such risks, Canada last year led a 58-country declaration condemning hostage diplomacy, leading China’s Ottawa Embassy to call Canada “hypocritical and despicable,” and China’s Global Times to refer to the declaration as “an aggressive and ill-considered attack designed to provoke China.”

Yet despite Canada’s unambiguous recognition of the dangers in travelling to China and the possibility that Beijing is fully capable of exacting revenge, Canada’s federal government issues only the mildest of travel warnings for Canadians contemplating China travel—Level 2 Canadian Travel Advisories, the same as it provides for travellers to the United Kingdom and France, where rare terrorist attacks have occurred.

But the risk in China, which has also suffered terrorist attacks, is greatly heightened, not least since Canadians who run afoul of Chinese authorities are on their own. Unlike in the UK or France, where the Canadian Embassy or Consulate can go to bat for a Canadian in distress, Canada has little to no influence in China.

Russia’s invasion of Ukraine, which led to sanctions on Russia and bureaucratic confusion, stranded Westerners in Russia, providing another reason for Canadians to be wary. Should Beijing make good on its threats to invade Taiwan, Canadians might suddenly find themselves in difficulty.

To properly warn Canadians of the risks of travelling to China, and to reduce travel to China to prudent levels, the federal government should classify China as a high-risk country. China warrants either a Level 3 warning to “avoid non-essential travel” or, more prudent still, a Level 4 to “avoid all travel,” the warning generally given to Canadians where the federal government would be unable to come to the assistance of Canadians abroad.

The travel trade with China should also be reduced in the other direction, to prevent Chinese citizens from coming to Canada simply to score a Canadian passport. Because Canada is one of the few countries that automatically offers citizenship to anyone born in the country—the United States is the only other developed country to do so—Canada has become a favorite destination for thousands of Chinese women who land in Canada before they’re scheduled to give birth.

CEO World Magazine rates Canada as the world’s second-best birth-tourist location (Chile is first) because the “Canadian passport is laden with strong aspects that help citizens travel to approximately 190 countries visa-free.” It adds that citizens do not need to pay taxes if they do not live there.

The United States is less favored for birth tourism because, unlike Canada, it taxes American citizens who live abroad on their global income.

Most Chinese who take advantage of birth tourism have no intention of remaining in Canada. They are affluent, often members of the CCP elite, and return to China immediately after giving birth. So, too, for other Chinese who game the immigration system to obtain a Canadian passport, sometimes to hide corrupt earnings by laundering them in Canadian real estate.

These “naked officials,” as they’re known in China, see a Canadian passport as an insurance policy in case they need to flee. Whether or not they are corrupt—in China, Canada has a reputation as a paradise for the corrupt—their presence in Canada leads to undesirable outcomes.

For one, the real estate market is distorted by what’s known as “hot money.” For another, China’s Xinhua news service reported that Chinese agents operate in Canada to hunt down corrupt officials. Their presence also threatens law-abiding Canadians of Chinese origin whom the CCP may target for political reasons.