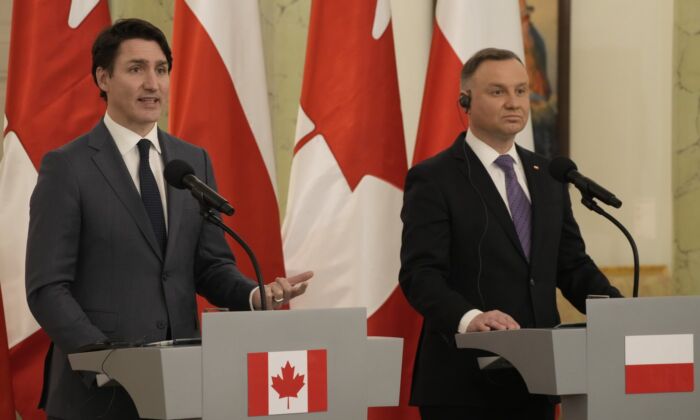 Prime Minister Justin Trudeau, left, talks to journalists during a joint press conference with Poland's President Andrzej Duda on the occasion of their meeting at Belwelder Palace, in Warsaw, Poland, March 10, 2022. (The Canadian Press/AP-Czarek Sokolowski)
Canada

Abramovich is a major shareholder in Evraz, a British multinational manufacturing company that operates a steel mill in Regina. Britain also sanctioned Abramovich on Thursday, as pressure continued to grow on the Boris Johnson government to bring down the hammer on the owner of its famed Chelsea Football Club. Abramovich has aimed his super yacht into the Mediterranean Sea to avoid having his assets seized.

Abramovich is one of five new Russian oligarchs added to the Canadian sanctions list for their close ties with Putin as Trudeau ended a four-country European trip.

Their assets will be frozen, and restrictions placed on 32 military entities in Russia, Trudeau said in Warsaw before his planned departure on Friday, as the Russian war on Ukraine appeared to be entering an ominous new phase. Airstrikes on cities in western Ukraine signalled an attempt by its forces to expand its attack beyond the country’s other regions further north and south.

Trudeau visited London, Berlin and Riga, Latvia, to meet with leaders on how to ramp up pressure on Russia to end its invasion of Ukraine. Their measures included sanctions, tightening the economic noose around the neck of Putin and his enablers, and sending new arms to Ukraine’s military and civilian fighters who have so far defied all odds in holding off the onslaught of Europe’s biggest military force.

However, Trudeau and his allies have not been able to give the Ukrainian leadership the one thing it wants to protect its civilian population that has been pummelled by Russian bombs for more than two weeks: a no-fly zone. Western politicians, NATO leaders and the Trudeau government all say that a no-fly zone would lead to all-out air war between them and the alliance.

Canadians may soon get to hear directly from Ukrainian President Volodymyr Zelenskyy, who has agreed to address Parliament next Tuesday.

As Deputy Prime Minister Chrystia Freeland noted this week as she stood near the Berlin’s symbol of Cold War freedom, the Brandenburg Gate: “They’re fighting for all of us. But they’re fighting alone.”

Therefore Canada and its allies have resorted to an unprecedented economic war on Russia in the hopes the rich and powerful cronies of Putin might turn against him, or the pain inflicted on its citizenry will somehow drive them to change their government.

Trudeau said the government would try to ensure that the sanctions against Abramovich don’t hurt the Canadian workers in the Saskatchewan company in which he holds a stake.

“The sanctions on Russian officials and oligarchs like Abramovich are directed at them so that they cannot profit or benefit from economic activities in Canada or the hard work of Canadians working with companies that they have investments in,” Trudeau said.

The prime minister said he believes the value of the shares Abramovich owns in Evraz is less than 30 percent. “We are obviously going to watch carefully but we are confident that this will not impact the hardworking Canadians who are doing good work in companies across the country.”

Standing next to Johnson in London earlier this week, Trudeau announced sanctions on 10 other Russian oligarchs from a list compiled by Putin’s major domestic enemy, the now jailed opposition leader Alexei Navalny, whom the Kremlin is accused of trying to poison two years ago.

Trudeau also said he’s considering a Canadian airlift of Ukrainian refugees who may want to leave Europe to find a safe haven in Canada as the European continent buckles under its worst migration crisis in decades. But he wouldn’t say when.

“I’m not ruling that out at all,” Trudeau said. “We’re looking at all options… Canadians want to be there for Ukrainians.”

“Everything is on the table when it comes to refugees” Freeland said in Berlin.

The prime minister came face to face with the crisis when he spent time with more than a dozen refugees in a Warsaw hostel on Thursday. While Canada has one of the world’s largest Ukrainian diaspora communities, at 1.3 million people, many of those fleeing their country would prefer to stay in Europe so they can return to their homeland when the war there ends.

Polish President Andrzej Duda told Trudeau that 100,000 people are coming from Ukraine into Poland every day, swelling his population by 1.5 million refugees. Duda said his country is warmly welcoming its Ukrainian neighbours and wants to give them sanctuary until they can return home.

But Duda did not try to hide the fact that the pressure on his country from a continuing influx of Ukrainians across its eastern border was not stopping and that help from allied countries such as Canada would be essential.

Trudeau said Friday the government will be providing extra resources to support its expedited refugee application process for Ukrainians that eliminates many of the normal visa requirements.

Trudeau also met with U.S. Vice-President Kamala Harris for an hour on Thursday in Warsaw as the two North American members of the 30-country NATO transatlantic alliance tried to show solidarity with their European partners, who are now facing the worst fighting on their continent since the Second World War.

Meanwhile, satellite imagery showed a long convoy of artillery that had been lined up near the capital of Kyiv seemed to be dispersing into nearby towns and forests.

The continent, and indeed the world, is still reeling from the Russian airstrike on a Mariupol maternity hospital that has been widely denounced as a war crime

Trudeau has not spoken directly to Putin as some of his allies have, such as Germany’s Olaf Scholz and France’s Emmanuel Macron, but he was asked Friday whether he has gained any insights in the Russian leader’s state of mind.

Trudeau said a central theme in the conversations of the allies with Putin was “what he wants, what the end game is” rather than focusing on “his deeper motivations and justifications.”

He said the leaders are trying to make Putin understand that “what he is doing is not going to lead to benefits for him or for the Russian people. On the contrary, it has set back Russia’s path forward.”