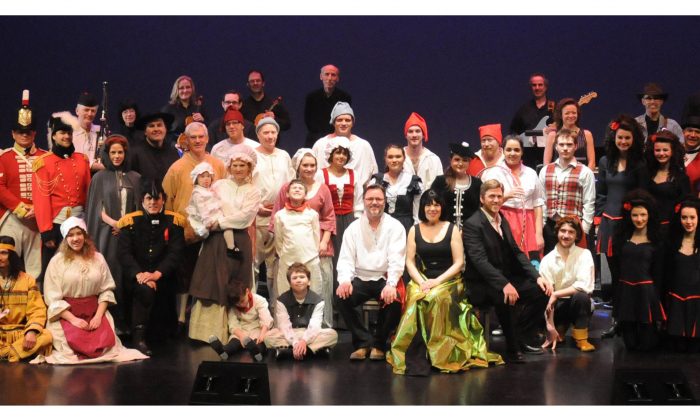 With the 36th edition of Ottawa’s annual Winterlude festival in full swing and lots of activities and events indoors and out, “Canada Roars” is a special show coming up on Family Day weekend celebrating the history of music in Canada that the whole family can enjoy.

This unique bilingual concert features more than 400 years of Canadian music, dance, and dramatic performances showcasing the culture of our big country. The presentation includes all the genres and styles, from traditional native dances, songs, and theatrical performances to scenes from the present day.

The cast includes world-class musicians and dancers and this year will introduce an urban dance troupe led by Abby Ambrose.

More than 50 performers will take the stage throughout the two-hour show, which is presented by Odyssey Showcase.

“This unique and exciting tourist attraction highlight is also an educational experience and an unforgettable musical treat. Featuring world-champion performers, this exclusive Canadian musical odyssey produces a rich and colourful tapestry. If Canada was a show, this is the show Canada would be!” states the TD Bank on its website. TD sponsors Odyssey Showcase year-round.

Odyssey Showcase is a registered charity that provides information to the public and presents live performances on the history of Canadian culture, arts, and music.

Odyssey Showcase began in 1999 when Ottawa vocalist Deborah Davis created, produced, and starred in “A Musical Taste of Our Canadian Heritage/Notre patrimoine canadien, une odyssée musicale,” for which she needed an ensemble of artists and skills.

Many of the same people continue to take part in the show today. Davis has received numerous awards for her community service efforts as an entertainer and producer.

An interactive fur trading post will be recreated in the foyer that provides a free pre-show family–friendly event from 2:30 p.m. to 6:30 p.m.

There, attendees can strike their own copper token, make bread, and engage in other fun activities. The Royal Canadian Mint will illustrate how payment methods have evolved over Canada’s history.

Winterlude, which runs until Feb. 17, is Ottawa’s premier winter festival of mainly outdoor events including skating and shows on the Rideau Canal—the world’s longest skating rink. The activities are family-friendly and take place in Ottawa and in Jacques Cartier Park in Gatineau, Quebec.