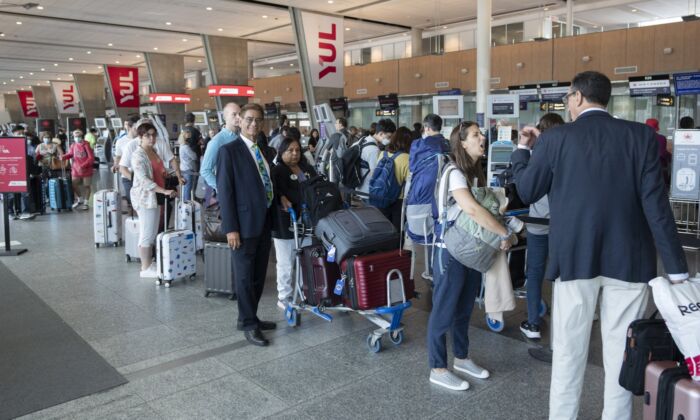 Passengers lineup at the check in counter at Pierre Elliott Trudeau airport, in Montreal, June 29, 2022. (The Canadian Press/Ryan Remiorz)
Canada

Random testing of fully vaccinated travellers arriving at Canada’s major airports will start anew on July 19, after the government paused the measure amid industry pressure and airport chaos.

“As we have said all along, Canada’s border measures will remain flexible and adaptable, guided by science and prudence,” said Health Minister Jean-Yves Duclos in a July 14 statement.

“We need to keep border testing measures in place because that is how we track importation of the COVID-19 virus, and of new variants of concern.”

The measure will affect travellers arriving at airports in Vancouver, Calgary, Montreal, and Toronto.

The Public Health Agency of Canada (PHAC) says the suspension was part of a strategy to move the testing for COVID-19 outside of airports.

Testing will now take place by in-person appointments at select testing providers and pharmacies, or through a virtual appointment for a self-swab test.

The government suspended random testing on June 11, amid mounting industry and political pressure over border restrictions and lengthy delays in understaffed airports.

Three days later, the government announced it was also suspending the vaccine mandate for the federal workforce and federally-regulated sectors.

PHAC says testing at borders is important to monitor the importation of the SARS-CoV-2 virus and identify new variants. It also says the measure is “essential” to help slow the spread of the virus.