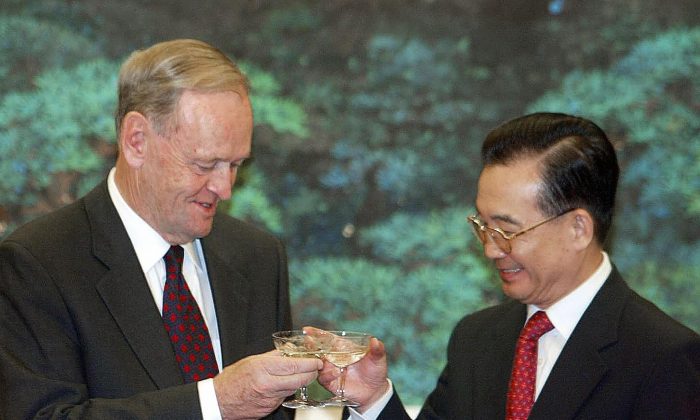 Canada Paying for Past Mistakes in Recent China Troubles

When Russian agents allegedly poisoned a former Russian spy and his daughter on British soil in 2018, the U.K. and over two dozen of its allies including Canada collectively expelled more than 150 Russian diplomats.

That’s the level of concerted international effort Ottawa needs to elicit from its allies in the face of China’s recent aggressions, rather than just getting statements of support, says Brian Lee Crowley, managing director of the Macdonald-Laurier Institute.

“I just don’t think that China cares what other countries say,” Crowley says.

“One of the reasons that China pays so much attention to the United States is because America is willing to put its money where its mouth is, and China is walking on eggshells now in its relationship with the United States. They’re terrified that President Trump might take his trade measures even further with China.”

But the reason Ottawa hasn’t been able to secure stronger support from Washington is that it lacks credibility when it comes to taking action against Beijing, with Washington seeing Canada as being reluctant to take a stand against China the way the United States has, Crowley says.

“There’s a credibility issue here. If Canada goes to the United States and says let’s work to create an international coalition [in response to China], the Americans—quite properly—might say Canada talks a good game, but all you do is talk,” Crowley said.

While the United States has risked a trade war to get China to behave, Canada still hasn’t booted Chinese telecom giant Huawei from its 5G network, and it has allowed Chinese companies to take over sensitive high-tech Canadian firms despite public outcries from U.S. politicians. Canada has also not been fully meeting its commitment to NATO.

“[The U.S. would say] you want our help with China, but you’re not willing to own your commitment to NATO, to spend 2 percent of your GDP on defence,” Crowley added. “So Canada’s soft-pedalling on these issues is coming back to haunt us.”

Since Canada arrested Huawei executive Meng Wanzhou on a U.S. extradition request last December, the two Canadians China detained shortly afterward are still behind bars in China, two Canadians charged with drug crimes in China have been sentenced to death, and a third Canadian was reportedly detained last week on drug-related charges. In addition, Canadian imports of canola, meat, and other products have been blocked from export to China, causing massive losses to Canadian producers.

Crowley says what Canada is experiencing now is a result of decades of taking an “ingratiating” attitude toward China, with the assumption that China has all the power in the relationship.

He adds that Canada has been seeking closer relations to China as a way of reducing dependence on the United States.

“This is something that many governments have pursued as a policy objective, and I think there’s been a terrible naiveté about China, its behaviour, its human rights record—and they [Canadian leaders] turn a blind eye to many, many terrible things that we would have spoken out about if they had taken place in other countries where we didn’t think we had as much stake.”

In the face of Chinese hostility, there are a number of actions Canada can take, Crowley says. The tactics may not lead to Beijing immediately releasing Canadian citizens or allowing the import of blocked products, but they will send the message that further escalation will have consequences.

One action Canada should take immediately is to ban Huawei from taking part in the country’s 5G networks. “This would indicate to China that we’re going to act first in our own interest, and we will not allow a fear of Chinese retaliation to determine our policy,” he says. The United States, Australia, and New Zealand have all banned Huawei from their 5G networks.

Canada should also strengthen relations with Taiwan, rather than allowing China to dictate what relationship Canada should have with the island, which Beijing claims as its own territory, he says.

And Ottawa should ask Beijing to reduce the size of its diplomatic representation, which Crowley says has become too great and is a risk as China is known to be involved in espionage in Canada and organizing the Chinese community against Canada’s interests.

Canada should also take a leadership role in helping to bring together allied countries that are suffering from China’s aggression, and take concerted action, such as performing joint military exercises in the South China Sea and increasing international recognition of Taiwan.

Author and filmmaker Fred Litwin agrees that Canada may be in a period of rough waters with its China troubles, but he says it’s important that Canada not “give in to the bully.”

He rejects the view raised by some that Canada is a middle power caught in a struggle between two superpowers, the United States and China.

“We are already on the side of the United States. We have a military alliance, we’re both in NATO, we have a free trade agreement. We are allies by law and treaty, so we’re not caught in the middle here,” he said.

“China is a huge threat to the West, and we are all on one side, which is the right side.”