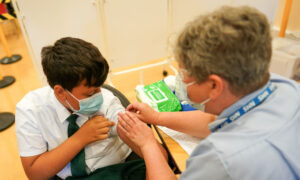 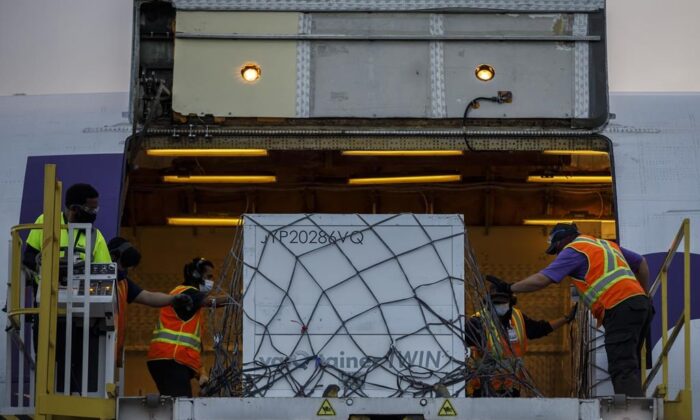 Workers unload a shipment of the Moderna COVID‑19 vaccine at the FedEx hub at Pearson International Airport in Toronto on May 20, 2021. (The Canadian Press/Cole Burston)
Canada

OTTAWA—Further deliveries of COVID-19 vaccines to Canada are on pause because provinces already have more doses than they can currently use.

Canada was to get 95 million doses of vaccine from Pfizer-BioNTech and Moderna by the end of September, but is about 20 million doses shy of that as of Wednesday.

But Canada is already sitting on a stockpile of 18.7 million doses and doesn’t need any more to fully vaccinate eligible people over the age of 12. That includes 8.5 million doses shipped to provinces and not yet used and 10.2 million in a federal stockpile provinces can turn to if they need it.

As of Wednesday 80 percent of eligible Canadians were fully vaccinated against COVID-19, and another seven percent have their first shot. At most Canada would need 11 million doses to finish vaccinating everyone over 12.

As such all provinces stopped requesting new doses by the end of August, and Canada has told suppliers not to send any more shipments for the time being.

Canadian officials are currently in talks with suppliers and other countries that need vaccines working on plans to donate Canada’s excess doses of Pfizer and Moderna.

Canada has already promised to donate 40 million doses it purchased but cannot use from AstraZeneca, Johnson & Johnson and the COVAX vaccine-sharing alliance.

It has to date shipped just 82,000 doses of the Oxford−AstraZeneca vaccine directly to Trinidad and Tobago.

Vaccine donations are trickier than they might first sound, because of legal liabilities and vaccine dose expiration issues. Most countries won’t accept doses if the expiration date is under eight weeks, to ensure they can be used in time.

The vaccine contracts with Pfizer and Moderna also did not specifically spell out how excess doses could be donated, while the contracts Canada signed with AstraZeneca and J&J did.

U.S. President Joe Biden called on countries like Canada to do more to help get the rest of the world vaccinated following a virtual vaccine summit at the United Nations General Assembly Wednesday.

Biden said the U.S. was doubling its donations to more than one billion and said “we need other high-income countries to deliver on their own ambitious vaccine donations and pledges.” He said the goal should be to vaccinate 70 percent of the world’s population within 12 months.

In a release, the PMO said Prime Minister Justin Trudeau joined other world leaders in committing to that goal.

The Prime Minister also spoke about Canada’s commitment to support equitable access to COVID-19 vaccines, tests, and treatments, including through significant financial support for vaccines and donations to countries.

It noted that to date, Canada has contributed more than $2.5 billion to help address the crisis globally, including sharing vaccine doses with the rest of the world.

Trudeau promised in the Liberal election platform that Canada will donate “at least” 200 million doses of vaccine through COVAX by the end of next year.

Currently, 31 percent of the world’s population is fully vaccinated, but the rollout has been very lopsided. Wealthy countries snapped up the vast majority of available doses, leaving developing nations to wait.

Africa has only fully vaccinated four percent of the population, compared with 51 percent in Europe and 45 percent in North America.

Canada is also preparing to start vaccinating children between five and 11, with Pfizer expected to request authorization for that age group imminently. The company said earlier this week a clinical trial showed the vaccine was safe and produced a robust antibody response in that age group.

The dose for children is one−third the size that given to adults and it’s not clear yet whether Canada could simply draw out smaller doses from each vial of vaccine already shipped.

A spokeswoman for the company said Wednesday Pfizer was preparing a “different presentation for pediatric use” but would not confirm if that meant none of the doses Canada already has could be repurposed for kids.