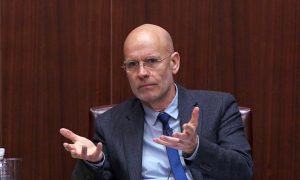 Warning From Down Under: Influence From China, Not Russia, Is Most Dangerous
0 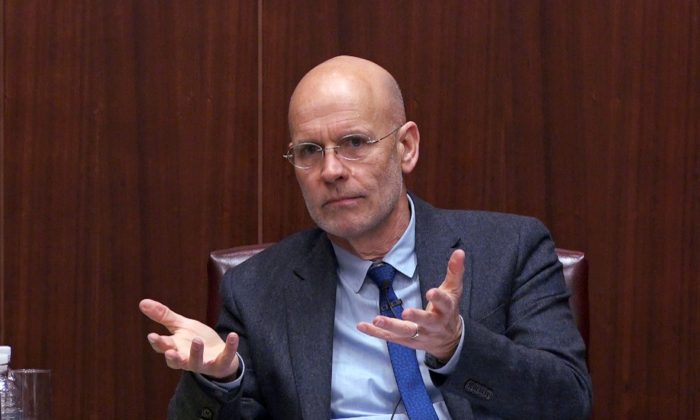 Clive Hamilton, co-author of “Hidden Hand,” speaks at the Center for Strategic and International Studies in “A Conversation on Chinese Influence in Australia and Beyond” in Washington on Oct. 18, 2018. (Wu Wei/Epoch Times)
Canada

Canada is particularly vulnerable to the Chinese Communist Party’s influence operations due to a “deep set of entanglements” formed after decades of courting the regime, says the author of a new book exposing China’s global program of influence and subversion.

Australian author Clive Hamilton made the comments at the launch of “Hidden Hand: Exposing How the Chinese Communist Party is Reshaping the World,” which he co-wrote with Mareike Ohlberg.

The book focuses on the push by the Chinese Communist Party (CCP) to reshape the world through a global program of subversion, while revealing the ties between Beijing, business elites, and Western politicians in various countries.

“There was this gradual process of Canada’s business and political elites forming a deep set of entanglements—financial, political, and personal friendships with Communist Party officials,” Hamilton said at an event to mark the launch of the book in Canada on June 25, organized by the Macdonald-Laurier Institute.

“And that big network of influence—because after all it was really a way in which the CCP was systematically setting out to build these relationships as a way of exerting political influence—has had really had a crippling effect on Canada’s understanding and response to China in recent years.”

Hamilton pointed to the Meng Wanzhou extradition case and “the brutality of Beijing’s reaction” that has gone “so far beyond any kind of normal diplomatic protocols” as an indication of the regime’s influence on Canada, after China detained Canadians Michael Kovrig and Michael Spavor in retaliation for Meng’s arrest in Vancouver in 2018.

Hamilton also alleges a deeper form of influence at play that has seen Ottawa “immobilized” in the Meng case amid a larger strategy of softness on China.

Senior people within the government are “entangled mentally as well as in other ways” in a favourable perception of China that has been cultivated by the CCP and its agencies over many years, he said.

That perception, he explained, includes the attitude that political elites themselves have a unique understanding of the regime and must tread carefully to avoid provoking the CCP.

“This set of beliefs that has been developed amongst elites that China under the CCP is very fragile, is very aggressive, is very hard to handle, and we must treat it with kid gloves. Because if we don’t, all hell will break loose and it will get out of control. And of course, that’s exactly what Beijing wants you to think,” he said, adding that some people erroneously equate communism with China’s 5,000-year-old traditional culture.

“We point out that no, China under the CCP is led by a government which is a Leninist party built on Leninist principles and that’s how it should be treated and understood. And I think that goes a long way to explaining why elites in Canada have so much difficulty grappling with the current situation.”

This week, 19 former federal cabinet ministers, parliamentarians, and diplomats signed an open letter urging the federal government to intervene in the extradition case against Meng in exchange for the release of Kovrig and Spavor, who were arbitrarily detained in China shortly after Meng’s arrest in December 2018.

The letter was widely criticized for setting a dangerous precedent of accepting China’s “hostage diplomacy”; Prime Minister Justin Trudeau said such a deal would put all Canadian travellers at risk.

“Hidden Hand” is a follow-up to Hamilton’s bestselling book “Silent Invasion,” which detailed the systematic attempt by the CCP to expand its espionage network and influence in Australia.

The new book expands the lens to the regime’s attempts to remould the world at large, showing the nature and extent of its influence operations across the Western world—in the spheres of politics, business, universities, think tanks, and international institutions such as the United Nations.

Hamilton said the motivation behind writing the book was to explain to readers that the Chinese communist regime is engaged in a well-organized and systematic attempt to “reshape the world order.”

“We are aware that there is very widespread ignorance and misunderstanding and naivete about China under the CCP in Western countries,” he said.

“A lot of these attitudes were formed in the ’80s and ’90s, particularly among elites, but also the media and the general public about China under the CCP, which now prove to be dangerously wrong as Canada has found out in the last year or so in a kind of a dire way.”

Hamilton said the most powerful pushback against the regime’s influence in Canada and other democratic countries will ultimately come from civil society, when people understand the true nature of the CCP and reject it.

There is a particularly strong opportunity for countries like Canada and Australia where there are large Chinese immigrant populations, he said, because they are a powerful resource in shedding light on influence operations by the regime’s United Front Work Department in Chinese communities.

“Many [Chinese immigrants] live in constant low-level or sometimes high-level fear of what the CCP might do to them if they do exercise their political rights living in a democratic country,” Hamilton said.

“We are obligated to support them, to back them, to protect their rights and to encourage them at every opportunity to be robust participants in the democratic debate in the free countries where they have chosen to live.”