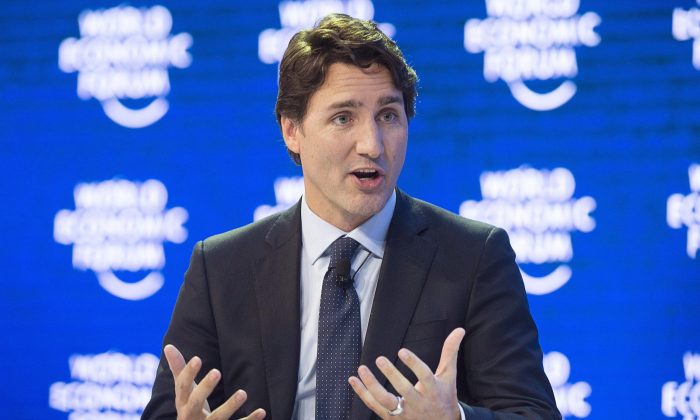 That’s the message Prime Minister Justin Trudeau delivered when he made his entrance Jan. 19 at the annual meeting of the World Economic Forum as part of his goal to rebrand Canada on the world stage.

Trudeau sought to use his keynote address titled “The Canadian Opportunity”—delivered hours after a session called “Canada’s global pivot”—to differentiate himself from former prime minister Stephen Harper, who often used the meeting to tout Canada as a resource powerhouse.

Trudeau said Canada’s natural resources remain an important part of the economy—even as a slide in oil prices delivers an economic punch to resource-rich provinces like Alberta. But he said the country’s growth doesn’t depend on what lies underground.

I want you to know Canadians for our resourcefulness.
— Prime Minister Justin Trudeau

Trudeau pointed to the success of University of Waterloo graduates in Silicon Valley and the school’s eclectic student population, calling diversity “the engine of invention.” And he framed Canada as a safe place to invest amid global economic uncertainty.

“We have a diverse and creative population, outstanding education and healthcare systems, and advanced infrastructure. We have social stability, financial stability, and a government willing to invest in the future,” he said.

The Canadian economy could use the global help.

When he took office, Trudeau’s advisers told him that global trends—social and economic—would affect the domestic economy despite Canada’s solid policy foundation and a well-educated population. His briefing binder says those international trends “could be occurring at a faster pace and on a larger scale compared to previous eras.”

Those trends included more disruptive technologies, the declining financial influence of the West, and aging populations in Canada and other countries that will put pressure on health care, and government spending.

Even the rise of the “sharing economy” has placed “increasing pressure on traditional policy tools like regulations,” the briefing notes warn. Copies of the documents were obtained by The Canadian Press under the Access to Information Act.

That disruption is part of the theme of this year’s meeting in Davos: “Mastering the Fourth Industrial Revolution,” which is focused on how technology is changing the way companies and businesses operate.

Trudeau told the forum that governments needed to spend, rather than pursue austerity measures.

“The fourth industrial revolution will not be successful unless it creates real opportunity for the billions who weren’t able to join us here this week,” Trudeau said in his speech that included references to the middle class. “In Canada, we get this.”

‘We are a resource economy’

Back home, NDP Leader Tom Mulcair said he wanted to see more actions from the government rather than simply telling the world that “Canada is back.”

Canadians, Mulcair said, know the country is in tough economic times, “families are suffering, there’s increasing income inequality in our country. We’ve got to start dealing with that.”

Our biggest export is still energy and I do not see a path where that does not continue to be the case.
— Calgary Mayor Naheed Nenshi

In Davos, Calgary Mayor Naheed Nenshi said he wouldn’t have used the same language as Trudeau when looking at the future of the Canadian economy. He called Canada’s economy “resource-plus.”

“We are a resource economy. Our biggest export is still energy and I do not see a path where that does not continue to be the case,” he said.

Former Liberal cabinet minister Brian Tobin, who was in Davos as vice-chairman of BMO Capital Markets, said the country didn’t need to “run away” from the resource sector. Commodities, he said, are cyclical and their value will rebound.

But the downturn in the price of oil was an opportunity to push international investments in the Canadian manufacturing sector, research and development, and high-tech, Tobin said.

Trudeau is a political celebrity at the meeting and his officials want to take advantage of the doors that open by getting him as much face time as possible with international power brokers.

Royal Dutch Shell CEO Ben van Beurden met with Trudeau in a meeting room on the lower level of the Davos hotel where the PM is staying. He said Davos was a place to meet with a lot of people in a short period of time.

Five of Trudeau’s cabinet ministers will also be able to rub shoulders with some of the most influential and powerful political and business leaders in the world.