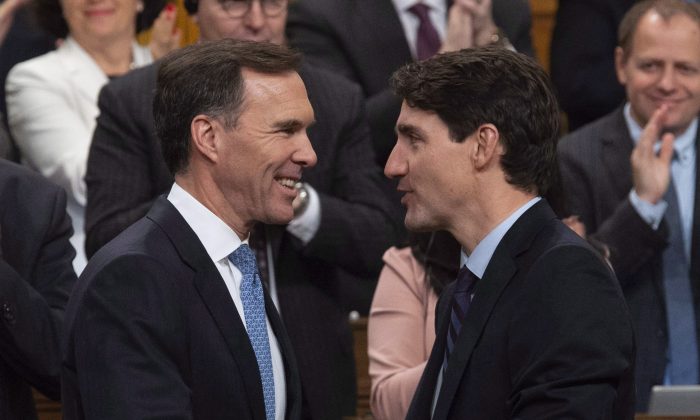 The fact that the government’s fall fiscal update lacked a roadmap to a balanced budget grabbed most of the headlines, but that wasn’t particularly surprising. On the surface, the problem of seemingly perpetual deficits doesn’t appear threatening for Canada given the strong economy.

But when the next recession rolls around and government spending rises further, the country’s fiscal position won’t be pretty.

A more global concern is the mounting debt loads on governments’ books, which make it seem as though lessons from the financial crisis 10 years ago have been forgotten.

And for the Liberals, lessons on sound fiscal management from a prior Liberal government—that of Prime Minister Jean Chrétien and his Finance Minister Paul Martin—have also been ignored, according to Jason Clemens, executive vice president of the Fraser Institute.

Clemens points to the 1960s, 70s, and 80s, when no matter where Canada was in the business cycle, it could not balance its budget.

Things became so dire in the early 1990s, emerging from a rough recession, that Canada lost its pristine AAA credit rating, which meant the government had to offer higher interest rates to borrow money. This, in turn, made it harder to balance the books as interest charges on the debt increased. Debt as a percentage of GDP hit 68 percent.

But as the economy exited the doldrums, the Chrétien Liberals bit the bullet, paid down debt, and ran surpluses.

Now, to be fair, Canada in 2018 is nowhere near that level of indebtedness. The federal deficit is less than 1 percent of GDP and the debt-to-GDP metric is a respectable 31 percent, especially when compared to the rest of the G7.

Canada’s economy has grown 2.4 percent since the fourth quarter of 2015—the second-fastest growth in the G7—and unemployment is at a 40-year low. Conventional wisdom says it is counterintuitive for the country to be racking up debt under these circumstances. That certainly isn’t what the Chrétien government did.

Experts warn of a vicious cycle potentially brewing while the Liberals attempt to carefully manage the deficit.

The International Monetary Fund (IMF) heaped praise on the Liberals for their first budget in 2016. Canada’s economy was still working itself out of the crash in oil prices at that time, and the Bank of Canada’s overnight rate target was 0.50 percent. Globally, interest rates were about as low as they could be and the hope was for fiscal policy to take the baton.

But the Liberals quickly departed from promised $10 billion deficits with growing discretionary spending that was supposed to be spent on infrastructure.

Now the IMF is singing a different tune, urging fiscal restraint. “With output above potential … the focus now should be on rebuilding fiscal buffers,” according to the IMF’s 2018 Article IV Consultation with Canada.

Focusing on the debt-to-GDP ratio—or debt burden—can be misleading, especially since a recession is overdue, says Clemens. The last one came in 2009, during the depths of the financial crisis. Certainly, warning signs abound with a slowing global economy and concerns about how fast interest rates will rise.

The Liberals have been touting a declining debt burden, which is projected to fall to a respectable 28.5 percent in 2023–24, but that does not tell the full story.

“To have large deficits and increasing the stock of debt when you’re growing means that when you inevitably go into a recession, or pronounced economic slowdown, those numbers get a lot worse,” Clemens said.

Speer argues that nearly $30 billion in additional government spending is the culprit for the deficit. The main thrust for the Liberals is to improve Canada’s business competitiveness in light of the broad U.S. tax reforms enacted last December.

What the Liberals did not do was to cut taxes. Jack Mintz, President’s Fellow at the University of Calgary School of Public Policy, argues that tax cuts would help business competitiveness more than the Liberals’ idea of being able to write off the cost of machinery and equipment immediately.

“Companies will shift costs to high-tax countries, and leave profits in the low-tax U.S., meaning more tax revenues for Washington, and less for Ottawa and others,” Mintz wrote in a Nov. 22 Financial Post column.

Improved structural policy is the panacea—leading to greater revenue without incurring big deficits.

“I think the intuition is pretty clear that what you improve for incentives for people to work and be entrepreneurial, invest, take on additional work—that’s actually how you can improve productivity in the economy, which can lead to higher revenues with the same tax rates,” Clemens said.

Canada was lauded for coming out of the financial crisis relatively unscathed, but a reminder of the early 1990s when its status as a AAA-creditworthy borrower was revoked is not something to be revisited.

Other G7 nations are in worse fiscal shape but Canada has not been able to resist borrowing given the era of low-for-long interest rates.

Hedge fund titan Paul Tudor Jones talked about the world being in a global debt bubble with global debt-to-GDP at an all-time high.

“This is going to be a very challenging time for policy-makers moving forward,” he said at the Greenwich Economic Forum on Nov. 15.