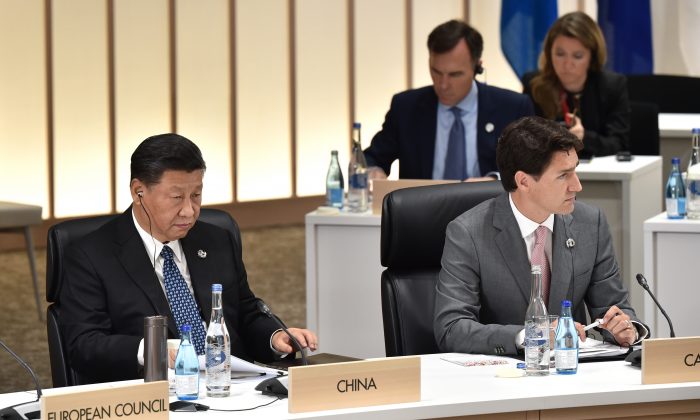 The G20 has come and gone, and if any progress has been made on getting China to ease export restrictions and release two Canadian citizens detained on trumped-up charges, it is fleeting but hopeful.

But a more conciliatory tone from outgoing Chinese ambassador to Canada Lu Shaye prior to the G20 seemed to suggest Beijing is aware that there may be a limit to their bullying, says trade expert Eric Miller, founder of the Rideau Potomac Strategy Group. The messaging of Chinese ambassadors would not be inconsistent with their overseers in Beijing, unlike former Canadian ambassador to China John McCallum’s was.

“In the grand scheme of things, markers have been put down, and the Chinese are aware that there are danger points that they may encounter if they push yet further on some of these issues,” Miller said in an interview.

Nevertheless, Canada’s Prime Minister Justin Trudeau only had brief informal discussions with Chinese leader Xi Jinping. Canada was relying on U.S. President Donald Trump to raise the issue of the two Canadians detained, Michael Kovrig and Michael Spavor. But the United States has plenty of its own concerns with China.

“This has to do with hegemony and who is going to be the leading power in Asia and globally, in fact,” Miller said.

But for Canada, a coherent and comprehensive strategy on China is something Miller says has been lacking for years. Instead, the gamut of reactionary tacks is being bandied about on how Canada should respond to China.

Trump said he didn’t discuss Meng Wanzhou, the Huawei executive whose arrest in Canada in response to a U.S. extradition request is widely believed to have triggered Beijing’s detention of the two Canadians.

On the first day of the two-day G20, Canadian Foreign Affairs Minister Chrystia Freeland said Canada had broad support from allies on the arbitrary detentions and on efforts to get China to pay closer attention to international norms.

But the reality on the ground hasn’t really changed.

All Over the Map

One camp suggests Canada should make a deal with China for the release of Meng, whose extradition hearing begins in January 2020.

More pundits and officials strongly hold the view that she absolutely should not be released, as that will only encourage China to further intimidate Canada. Miller, an adviser to the deputy minister of international trade, says that releasing Meng doesn’t have much support among senior voices in the government, as it would set a bad precedent in the broader relationship with China. He adds that such a tactic would risk irritating the United States, in addition to sending mixed messages about Canada’s adherence to the rule of law.

“If they decide to do a deal for Meng Wanzhou, the Chinese will begin to believe that everything is negotiable,” Miller said.

Bowler says Canada should “withdraw recognition of this genuinely evil clique in Beijing” and “recognize once again the Republic of China on Taiwan,” effectively reversing the 1970 decision by then-prime minister Pierre Trudeau, who chose to support communist dictator Mao Zedong instead of democratic Taiwan.

The wide range of views hints at taking a step back.

The government doesn’t have a credible understanding of how China conducts its foreign affairs, and how it organizes its economy and subsidizes exporters, he adds.

“Nobody has taken a holistic look at this,” Miller said, suggesting a China strategy could be developed by an external panel of eminent Canadians or an internal panel of senior officials.

Who is chosen as Canada’s next ambassador to China will be pivotal to the strategy. Miller suggests a strategy should be put forth in the coming eight months so that the next government has a robust policy as it begins a new mandate.

“Develop a coherent strategy so that when the Chinese lash out, you know what to do. You’ve done the policy thinking and you’ve got the instruments in place in order to be able to respond,” Miller said. “That doesn’t mean there won’t be surprises or setbacks or upheavals, but this is the foundational stuff that’s going to need to get done.”

Mary Ng, Canada’s minister of small business and export promotion, went to China after the G20 to attend the World Economic Forum. Ministers tend to “stay in their lane,” says Miller. Although he expects her to raise the concerns facing small Canadian meat and canola producers, he also anticipates that it will make little impact on the Chinese.

“I do remain convinced that this needs to be married up into a broader strategy so that when the Mary Ng of the future goes to China, they carry with them some coherent policy instruments and some coherent thinking about how to engage on these issues,” he said.

Under Trudeau, Canada’s push for a progressive agenda has gotten nowhere with China, a situation that again calls for a coherent and well-thought-out approach.

“You have to deal with the world the way it is, not the way you wish it was,” Miller said.

International pressure may be softening China’s threats—but that remains to be seen with actions. There’s no quick and easy path to resolving the trade issues and rescuing the two detainees Kovrig and Spavor in the short term, says Miller.