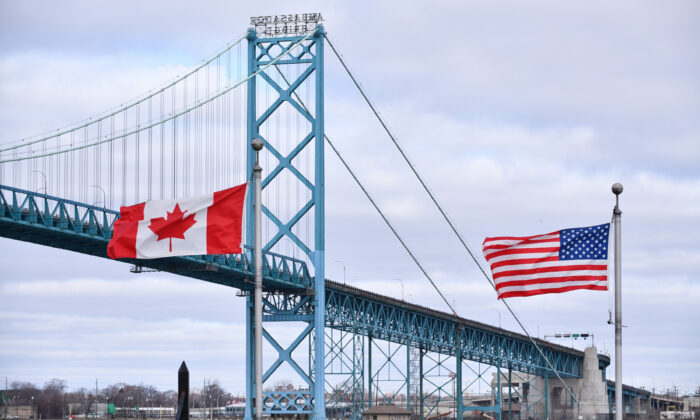 Canadian and American flags fly near the Ambassador Bridge at the Canada-U.S. border crossing in Windsor, Ont., on March 21, 2020. (The Canadian Press/Rob Gurdebeke)
Canada

With the release of Canadians Michael Kovrig and Michael Spavor held hostage by communist China, an expert panel says Canada must now look at widening its strategic partnerships, particularly in the Indo-Pacific region, to deal with what it calls Beijing’s coercive diplomacy.

The group of international affairs experts came together in an Oct. 6 webinar to discuss the “hostage diplomacy, economic coercion, and overt threats” employed by Beijing and to outline strategies Canada and like-minded nations can collaborate on to address the regime’s antagonism.

“We need to broaden our partnerships. We need to be more multilateral in our engagements,” said Stephen Nagy, senior associate professor in international studies at the International Christian University in Tokyo, Japan, at the event hosted by the Macdonald-Laurier Institute.

“When economic coercion does happen, or other forms of coercion, … we can rely on those partners and those economic networks and the strategic partnerships to put collective pressure on Beijing, to push back.”

The event was part of a series of discussions about the Chinese regime’s increasing challenges to the rules-based international order and its aggressive economic and security policies affecting North America, Europe, Asia, and beyond.

Luke Patey, a senior researcher at the Danish Institute for International Studies, said it’s crucial for Canada to recognize economic and strategic interests in Asia beyond China. He noted that the European Union launched an Indo-Pacific strategy for co-operation in April.

“Canada needs to strongly consider looking at growth opportunities in India and in Southeast Asia in particular,” he said.

“It’s … sort of unpacking your economic relationships with China. Seeing where you’re prone, where you have heavy dependencies, and then seeing what other countries are out there that might offer opportunities to start to diversify.”

Patey, author of “How China Loses: The Pushback Against Chinese Global Ambitions,” said various anti-coercion plans to deter Beijing’s aggression are being considered, including having interstate funds to support targeted industries.

“There’s also been discussions about having sort of an economic Article 5—similar to what NATO [North Atlantic Treaty Organization] has on the economic front—so that if one country is targeted economically, there will be a response, an economic response from allies,” he said.

Nagy said Canada can learn from Japan, another country that has experienced China’s hostage diplomacy. A professor from Hokkaido University was detained in September 2019 for alleged spying but was returned home two months later after the Chinese Foreign Ministry said he had “confessed to illegally collecting state secrets.”

“Japan has been able to navigate this relation and the coercion I think from a position of strength,” Nagy said, meaning that “it continues to deepen its bilateral relationship with the United States, which gives it leverage in pushing back against China on difficult issues.”

He added that Japan also diversifies its strategic partnerships. It participates in the Quadrilateral Security Dialogue, also known as the Quad, with the United States, Australia, and India. In addition, it invests in multilateral agreements such as the Japan-EU Economic Partnership Agreement and the Progressive Agreement for Trans-Pacific Partnership, a free trade agreement with 11 other countries including Canada.

“Japan is negotiating that relationship with Beijing from a comprehensive position of strength that allows it to bring in and anchor other actors in the region to support Japanese interests,” Nagy noted.

Thomas Wilkins, a senior lecturer in security and strategic studies at the University of Sydney, stressed the need to diversify supply chains, increase domestic manufacturing, and strengthen minilateral partnerships.

He noted that Australia’s attempt to “compartmentalize” its security relationships with the United States and Japan separately from its economic benefits with China “was always a little bit of a charade.”

“The economic chessboard and the security chessboard, or silos like that, they’re no longer separate anymore. The walls have broken down between these compartments,” said Wilkins, who is also a senior research fellow at the Japan Institute for International Affairs.

The Chinese regime’s establishment of the Asian Infrastructure Investment Bank, Belt and Road Initiative, and Shanghai Cooperation Organization “has changed the landscape in the Indo-Pacific region,” he added. For countries operating within this region, the “wall between economics and security is breaking down.”

Nagy said that while China’s reputation with Western democracies has hit record lows in recent years, developing countries such as Nepal and Sri Lanka along with some African and Middle Eastern states have a different view—that China is “not so bad.”

“This is really important,” he said. “As we calculate and we configure our approaches to China, we should ensure that we understand that [China’s] relationship with us may be problematic, but they have many other partnerships around the world, and they sell themselves as the champion of emerging states.”