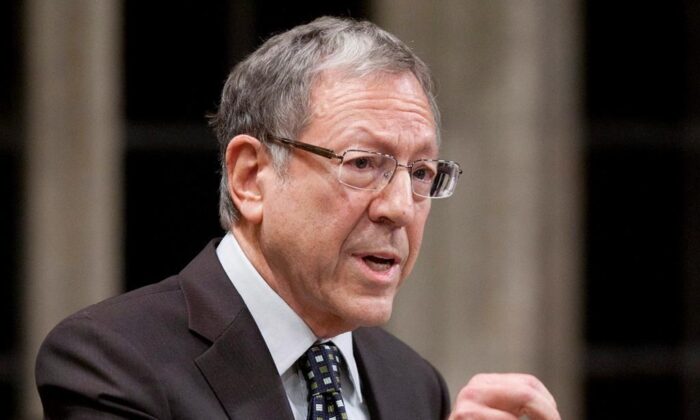 Then-Liberal MP Irwin Cotler rises during question period in the House of Commons in Ottawa, on Dec. 15, 2011. (The Canadian Press/Adrian Wyld)
Canada

Canada remains the only country among the Five Eyes intelligence-sharing alliance that hasn’t made a decision regarding Huawei and 5G, despite the intelligence community’s warnings about the company’s threats to national security. The other four countries—the United States, the United Kingdom, Australia, and New Zealand—have banned or taken steps to ban Huawei from their 5G networks.

Huawei was founded by a former officer of the People’s Liberation Army and has close ties to Beijing. The U.S. government has urged its allies to exclude the company from the West’s next-generation communications, saying Beijing could use it for spying.

“We continue to weigh and look at different options, but we will be no doubt making announcements in the coming weeks,” Trudeau told reporters on Sept. 28.

While the federal government has been sitting on the fence on the Huawei decision for years, Canadians’ mistrust of the company appears to be on the rise. A recent poll conducted by Nanos Research found that 76 percent of Canadians are against Huawei joining the country’s 5G network—an increase from 53 percent who supported a ban in 2019.

As well as potential espionage, another controversy surrounding Huawei is its CFO Meng Wanzhou, who was detained in Canada on U.S. extradition charges until last month when she signed a deferred prosecution agreement (DPA) with the United States and returned to China.

Cotler said the fact that Meng signed the DPA shows she acknowledged her role in Huawei’s criminal charges in relation to violation of U.S. sanctions on Iran.

“I think this should make the decision [to ban] clear for Canada after Meng Wanzhou has herself acknowledged, in her statement of facts, the misdeeds with respect to Huawei,” he said.

“At this point, we need to explore alternate technologies.”

Meng was arrested in Vancouver on Dec. 1, 2018, on a U.S. extradition request related to fraud charges for allegedly misleading HSBC in 2013 about Huawei’s business dealings in Iran, in violation of U.S. sanctions.

Days later, Canadian citizens Michael Kovrig and Michael Spavor were detained in China in what was widely seen as a case of “hostage diplomacy” by Beijing. The “two Michaels,” who were imprisoned in China for almost three years, were released back to Canada on the same day Meng returned to China last month.

Other Canadians Still Held in China

Cotler said the arbitrary detention of Kovrig, Spavor, and other Canadians shows the Chinese regime is willing to flout the rules-based international order to get what it wants, including engaging in “retaliatory and vile hostage diplomacy.”

Though the saga of the two Michaels is over, he says it’s important to remember the Canadians who remain detained in China and the ongoing threat Beijing poses.

Cotler cited the case of Huseyin Celil, a Canadian citizen and Uyghur human rights activist who has been imprisoned by the Chinese authorities since 2006.

He also mentioned Canadian citizen Sun Qian, a Vancouver-based businesswoman who was arrested while visiting China in 2017 because she practises Falun Gong, a self-cultivation discipline that includes meditative exercises and moral teachings based on the tenets of truthfulness, compassion, forbearance.

Sun’s lawyers and family members said she was subjected to torture and brainwashing sessions while in police custody. A Beijing court sentenced her to eight years in prison on June 30, 2020, and she reportedly renounced her Canadian citizenship in the process.

According to Global Affairs, there are approximately 115 Canadians currently in custody in China, with little information on when or if they will be able to return home. At least four of them have been sentenced to death.

Cotler said engagement with China should only be done if it upholds “universal values” and adherence to the rule of law.