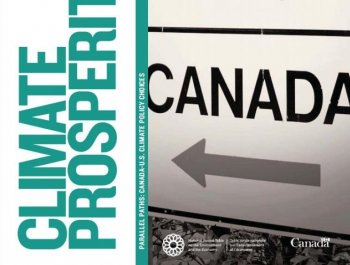 A National Round Table on the Environment and the Economy report says Canada needs to move forward with climate change reduction strategies and harmonize with the United States later. (NRTEE)
US

Canada Must Chart Its Own Course on GHG Emissions, Says Report

Matthew Little
Matthew Little is a multi-media reporter for The Epoch Times.
View profile
Follow
biggersmaller
Print
TORONTO—Canada should move independently of U.S. climate policy and phase in harmonization to avoid delays in emissions reductions and maintain economic competitiveness, says a new report by the National Round Table on the Environment and the Economy (NRTEE).

Describing the approach as a “Transitional Policy Option,” the report says Canada needs to start charting its own course to reduce greenhouse gas emissions in the face of an uncertain American position.

“The Transitional Policy Option brings about real carbon abatement and emission reductions in Canada whether the U.S. implements equivalent policy or not,” says the report.

The plan calls for a national cap-and-trade system to cap emissions. Under the system, Canadian firms would have carbon credits to create a certain amount of pollution. Those credits can be bought or sold depending on carbon output.

The plan would limit international permits that could drive up the price of credits while also limiting domestic offsets, like planting trees, that would allow firms to pollute more.

The report says Canada also needs a technology fund to stimulate investment in emission reductions technologies, and that new vehicle emissions standards that mirror the U.S. should be adopted.

“We need to understand how we can meet our environmental responsibilities as a sovereign state and a global actor fully comprehending the unique economic ties we enjoy on this continent,” stated Bob Page, NRTEE Chair. “We are looking towards conformity in purpose, not uniformity in detail.”

Under this plan, Canada would establish a price collar to keep carbon prices in Canada no more than $30 a tonne higher than the U.S., though U.S. currently has no national cap-and-trade system.

In 2008 President Barack Obama indicated his plans for the U.S. to enter such a plan but an act to create it failed to pass the Senate.

Critics of the system in Canada say a cap-and-trade system could put the country at a competitive disadvantage, while the Conservatives have argued that Canada should walk lockstep with the U.S.

The NRTEE is an independent federal advisory agency dedicated to preserving the environment while maintaining a strong economy.