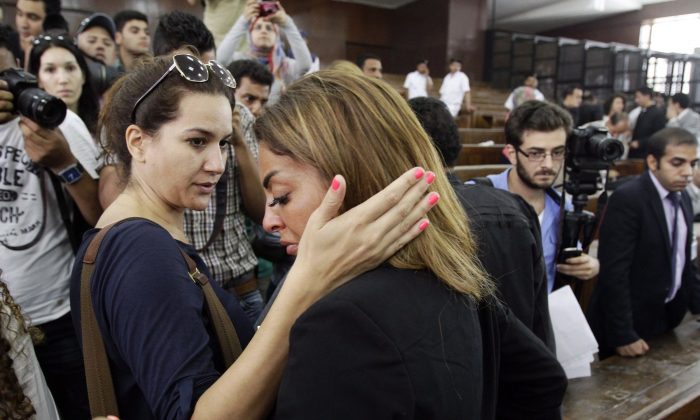 Mohamed Fahmy’s fiance is consoled by a friend following the verdicts in the sentencing on hearing for three Al-Jazeera journalists, including Fahmy, in a courtroom in Cairo on June 23. The journalists were each sentenced to seven years on terrorism charges. (AP Photo/Ahmed Abd El Latif, El Shorouk Newspaper)
Canada

Canada Made it Clear to Egypt That Fahmy Verdict Not Right: Harper

And he said he has expressed Canada’s displeasure to the Egyptian government.

The comments, which came during a news conference in Quebec, were Harper’s first public statements since the Al-Jazeera journalists—Fahmy, Australian Peter Greste, and Egyptian Baher Mohamed—were convicted in a Cairo court Monday and sentenced to seven years in prison.

The three journalists were convicted of giving support to the Muslim Brotherhood, which Egypt labels a terrorist group. The journalists deny they are terrorists and say they were just doing their job.

Their continuing imprisonment has sparked harsh international condemnation of Egypt. And it has also opened the Harper government to widespread criticism for what some say is a tepid response, compared to the tough language coming from the United States, Britain and Australia.

“We have been very clear on our concerns—deep concerns—about not just the verdict but about this process from the beginning,” Harper said. “We have expressed those to the authorities.”

Harper also said Canada has been providing consular support and services to Fahmy from the outset.

The Harper government has been criticized for not taking a tougher stand on Fahmy, but Foreign Affairs Minister John Baird has said that bullhorn diplomacy won’t work.

Baird said the government is trying to have Fahmy freed on appeal, or through a possible presidential pardon. Though Egypt’s president has ruled out intervening in the case, legal experts are divided on whether the imprisoned trio has the possibility of being freed as part of the ongoing legal process.

“Obviously there are some difficult circumstances here,” Harper said. “But the Egyptian authorities are very aware of the position of the government of Canada, and we will continue to press that position going forward.”

Baird has that said Fahmy’s case is complicated by the fact that he is a dual Egyptian and Canadian national and also by the nature of the relationship between Al-Jazeera, its Qatari ownership, and Egypt’s banned Muslim Brotherhood.

Baird has said that the government of Qatar provides financial support to the Muslim Brotherhood, but he said no one seriously believes that Fahmy was “in cahoots” with the organization.

The Muslim Brotherhood has since been rebranded a terrorist group. The government accused Fahmy and his two colleagues of compromising Egypt’s national security though its reporting on the Brotherhood.

The case raises serious questions about media freedom, and it has been widely denounced, including by the international rights’ watchdogs Amnesty International and Human Rights Watch.