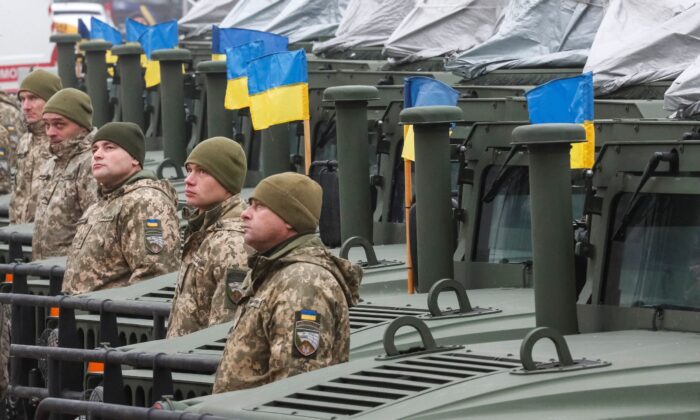 Ottawa has announced it is giving a loan of up to $120 million to Ukraine, and Prime Minister Justin Trudeau is not ruling out the possibility of sending military equipment as worries about Russian military action against Ukraine remain high.

The loan is “one of the top things that the Ukrainian government has been asking for from Canada,” Trudeau said at a press conference on Jan. 21.

“Russia is aiming to destabilize Ukraine, including economically. This loan will help support Ukraine’s economic resilience.”

With Ukraine asking Canada this week for lethal and non-lethal military gear, Trudeau was asked if the loan means Canada will not be sending military equipment in the short term.

“No, much to the contrary, we are demonstrating that we are there to help the Ukrainian government and the Ukrainian people by giving them what they need,” he answered.

“We know that they need other things. We are looking at what we can do to help more.”

Asked how a loan would deter aggression, Trudeau said Russia is not just amassing troops on Ukraine’s border, but is also involved in cyberattacks, propaganda, and economic destabilization.

“One of the things that the Ukrainian government has been clear on is that having additional financial resources to shore up their economy will be extremely important,” he said.

Canada has also offered a grant of up to $6 million to support the implementation of the loan, according to a Global Affairs Canada (GAC) press release.

GAC says the loan is to support “economic resilience and governance reforms,” and Canadian and Ukrainian officials are already meeting to discuss the terms of the loan and a timeline for its implementation.

A GAC spokesperson told The Epoch Times by email that the loan cannot be used to purchase weapons or for military purposes, and that a mechanism will be in place to monitor the use of the loan.

In 2014 and 2015, Canada provided $400 million in loans to Ukraine to support its economic recovery and development, and these were repaid in full with interest and on schedule in 2020, GAC says.

While the Biden administration has said involving U.S. combat troops in Ukraine is off the table, Trudeau did not say definitively whether Canadian troops would be involved, saying only that he would “not engage in hypotheticals.”

Canada has had a training mission in Ukraine since 2015 consisting of some 200 troops. Global News reported this week that a small contingent of special forces operators was recently sent to Ukraine. It would not be involved in training, however, but would develop evacuation plans for Canadian diplomats.

“Our position is that any shipment of weapons to a country, which, like Ukraine, is in the middle of a civil war practically, is not conducive to any peace initiatives,” he told CTV, according to Russia’s official news agency Tass.

Russia is reported to have amassed some 100,000 troops along Ukraine’s borders. It is unclear what could be Moscow’s objective in a potential incursion or invasion.

The Crimean Peninsula, which was taken by Russia from Ukraine in 2014, is not connected to Russia by land; therefore, capturing a land bridge in southeastern Ukraine may be one of Moscow’s aims.

Kremlin spokesperson Dmitry Peskov says claims that Russia is about to invade are “empty and unfounded,” Tass reported on Jan. 21.

But Tass paraphrased Peskov as saying he “did not rule out the possibility of provocations aimed at justifying such allegations and warned that attempts to use military force to resolve the crisis in southeastern Ukraine would have serious consequences.”