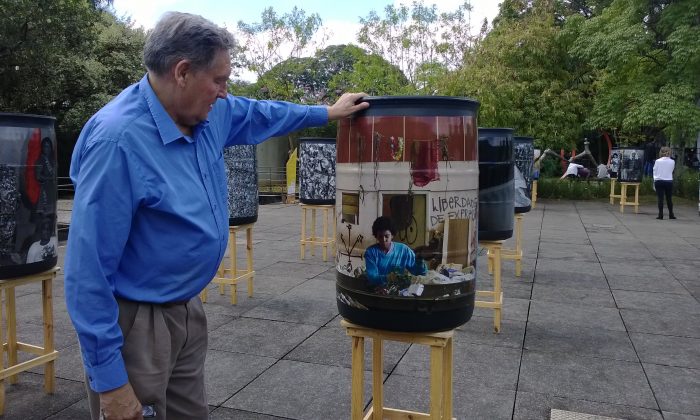 Zero waste expert Paul Connett looks at an exhibition of photos of waste pickers or catadores in Sao Paulo, Brazil. Brazil’s 1 million catadores are involved in all stages of waste management, such as door-to-door collection, transport, separation, and value added production. The exhibition was part of an effort to win respect for catadores and improve both their image and working conditions. (Photo by Nina Orlow)
Canada

The guru of the zero waste movement is warning that, despite some strides in the right direction, Canadian cities are not doing enough to reduce their garbage.

“Zero waste is catching on, but Canada has been a major disappointment,” says Paul Connett, a former environmental chemistry professor from the United Kingdom who crusades against large landfills and waste incinerators.

Connett will be a keynote speaker at the upcoming three-day Zero Waste International Alliance Conference and Dialogue in Nanaimo, B.C., in early October.

He says his talk will emphasize how “waste landfills, incinerators, and seas riddled with trash provide visible evidence that our throwaway society simply cannot be sustained on a finite planet.”

Over the past 30 years, Connett has given pro bono presentations on zero waste in Canada, the U.S., and over 61 other countries as well as to the United Nations Commission on Sustainable Development. His “Ten Steps to Zero Waste” program has been implemented to varying degrees by countless communities around the world.

But he expected more from Canada, he says.

“At one point, I thought Canada was going to lead North America in the movement to create zero waste, but that’s not going to happen now,” he says.

“Ontario wants to build a large incinerator, waste handling in Toronto is behind the times, and Edmonton dropped the ball on one of the largest composting programs in North America when they decided to compost pig waste with organic matter.”

He says Edmonton’s organic waste is not clean by zero-waste standards. Zero waste experts hold that organic waste must be as clean as possible before it is placed back in agricultural land to grow more food.

Zero waste is just what it sounds like—producing, consuming, and recycling products without throwing anything away.

Zero waste, however, doesn’t necessarily mean no waste. Most cities use a definition from Zero Waste International Alliance, the environmental group that’s spearheading the Nanaimo conference.

They say that diverting 90 percent of waste from landfills and incinerators is “successful in achieving zero waste, or darn close,” since a minute amount of waste will always exist.

Zero Waste Canada says on its website that incineration or waste-to-energy projects do not comply with zero-waste standards, calling such methods “inefficient and dangerous.”

“Incineration destroys the highest value, the function of objects and leaves nothing but unusable sludge and ash. Incineration is a short-sighted approach to waste whereas zero waste offers a sustainable method by which we can ensure the highest quality of environmental, planetary, animal, and human health,” the website says.

For his book “The Zero Waste Solution: Untrashing the Planet One Community at a Time,” Connett researched how waste is handled in 49 U.S. states, 7 provinces, and 51 countries.

In Canada, he cites Nova Scotia as the most successful province, diverting 50 percent of its waste from landfills and incinerators. Of the province’s 900,000 people, half are involved in waste reduction, with the recyclables used in Nova Scotia’s own industries.

The ubiquitous plastic shopping bag was dealt a blow in Ireland after the government put a 15-cent tax on them in 2002. In just one year, use was reduced by 92 percent.

Effecorta, a store in Tuscany, Italy, has 66 taps for liquids—including wine—where customers can use refillable containers, saving money and reducing waste at the same time.

San Francisco is cited as having one of the most comprehensive zero-waste strategies, with a 90 percent rate of diverting waste to good causes and away from the landfill.

The city has relied on ordinances and regulations to prod citizens and businesses into wasting less. In 2009, San Francisco became the first U.S. city to require food composting for residents and businesses.

Individuals and companies are also expected to sort plastics, aluminum, and papers into blue bins and garbage into black landfill bins. The less waste residents put in the landfill bin, the less they pay for curbside collection. This system, known as “pay as you throw,” is used in hundreds of other U.S. cities.

A system similar to pay as you throw will be addressed at the conference presentation, which takes place at the Coast Bastion Hotel and Christ Community Church in Nanaimo Oct. 2-4.

In its ninth year, the conference will feature over 28 speakers from around the globe, including Dan Phillips from Huntsville, Texas, an expert on re-purposing recycled and reclaimed building materials.

Much of Connett’s discussion will focus on 10 steps that involve local and global waste cleanup. They are outlined below.

Step 1 follows this logic: If you keep all your garbage together, you’ve got waste. But separate your food scraps and other organic matter from usable waste—cardboard, metals, glass, and plastics—and you’ve got resources for reuse and repair. Step 1, called source separation, involves separating waste from discarded items.

Step 2 involves collecting waste door-to-door from colour-coded bins or bags. Basically, in what Connett calls the “ideal system,” one container is used for kitchen waste, one or more for recyclables such as paper, bottles, and cans, and a third is used for organics. It’s important to keep garbage clean by putting the organics back into agriculture to grow food.

Step 3 is composting. Kitchen waste and other organic matter not only causes foul odors, it also generates methane and leachate in landfills. But perhaps the most important reason that we need to collect clean organic waste is because it is needed by farmers to replenish their soils of depleted nutrients and, especially in warmer climates, help fight erosion by holding onto moisture. Not only does the conversion of organic matter to compost avoid the global warming gases involved in the production of synthetic fertilizers and topsoils, but it also delays the release of global warming gases.

Step 4: Recycling. In larger communities, recyclable materials are destined to go to material recovery facilities, which number in the hundreds world-wide. Their function is to separate the paper, cardboard, glass, metal, and plastic and prepare the materials to meet the needs of the industries that use them to manufacture new products.

Step 5: Reuse, repair, and deconstruction. The centres that handle this work are either for-profit or non-profit, but Connett sees the reuse and repair centres becoming the community centres of the future. The centres will collect appliances, furniture, and other items from homeowners and old buildings. The building and renovation materials are a very profitable part of their business. Timber, bricks, bathroom fittings, doors, and windows have a high resale value.

In his book, Connett considers ReSOURCE in Burlington, Vermont, as a poster child for such a program. The organization repairs and resells household items that otherwise would have gone to the dump. Many of these items now make furniture. What’s more, since the beginning of the ’90s, more than 750 people have received job training and skills for the program, 10,000, low-income people have garnered needed household goods and building materials, and more than 10,000 tons of materials have been kept from the landfill.

Step 6 is a waste-reduction measure that deals with plastic bags, reusable bottles, glass and reusable instead of disposable diapers. Step 6 deals with residuals, what Connett defines as items that can’t be broken down, such as packaging that piles up in landfills. He explains that governments needs to “discourage their production.”

For example, in Ireland, the government introduced a 15-cent tax on each plastic shopping bag used in shopping malls. Much to the surprise of everyone, this measure reduced the use of these bags by 92 percent in a year.

Step 7 uses economic incentives such as the Pay-As-You-Throw (PAYT) system. The idea here is to encourage citizens to maximize the diversion possibilities by penalizing the production of residuals. Typically recyclables and “compostables” are picked up for free or at a flat rate (sometimes absorbed in local taxes), but an extra charge is applied to the residuals. The more residuals you make the more you pay. This can be done in several ways: in some communities the residuals are weighed; in others you can choose the size of the container for the residual fraction but for the larger container you pay more. In some programs, stickers are purchased to affix to each bag placed on the curb; or special plastic bags might have to be purchased.

Step 8. How the residuals described above are handled is the key difference between waste disposal (landfills and incinerators) and the zero-waste strategy. The residuals need to be sent to a residual separation and zero-waste research facility and not directly to a landfill.

In the residual waste slated for the separation facility, bags of residual waste are opened and the contents tipped onto conveyor belts. Magnets pull out items made of steel or iron. The rest is passed along the conveyor belts to well-protected and trained personnel who pull out bulky items, more valuable recyclables (such as beverage containers that reap a returnable deposit), and toxics. The dirty organic fraction—for example, kitty litter, diapers, or unseparated food scraps—reaches the end of the conveyor belts untouched. This is then shredded and biologically stabilized either by a second composting operation.

The program calls for a research centre to monitor, evaluate, and improve the whole program by maximizing the capture rate of reusables, recyclables, and clean “compostables” in the door-to-door collection systems as well as the reuse and repair centers.

Step 9 focused on better industrial design for the program—design for sustainability, clean production, and extended producer responsibility. Packaging must be designed for reuse and products must be made for a prolonged life and capable of easy disassembly and repair. This is all part of what some have described as the triple bottom line or the three Ps: profit, people, and the planet.

Step 10, called interim landfills, control what goes into the landfill using the residual separation and zero-waste research facility. Connett uses the term interim because in the zero-waste strategy the vision is to eliminate landfilling altogether. However, an interim landfill needs to handle what you can’t currently reduce, reuse, recycle, compost, or redesign out of the production system.Susan L. Blanchard is a Calgary-based freelance writer.