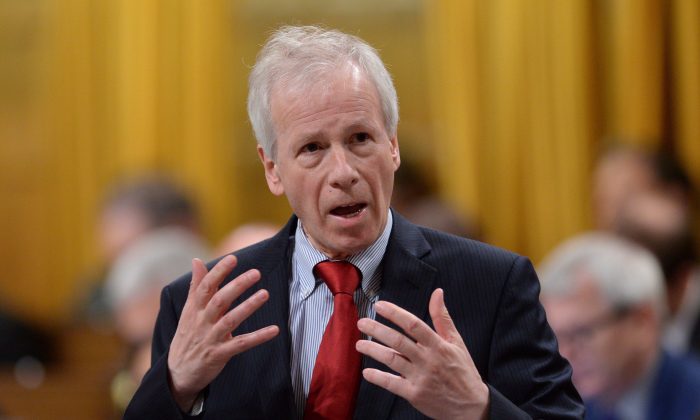 Foreign Affairs Minister Stephane Dion responds to a question in the House of Commons on May 3, 2016. (The Canadian Press/Sean Kilpatrick)
Canada

The International Syria Support Group includes 26 countries and organizations, including the United States and Russia, which are co-chairs of the body.

Dion says only a negotiated settlement can end the civil war and eliminate the destabilizing influence of the conflict, including the huge migrant populations surging into Europe.

He says the Russians and the Americans have proposed a sequence of events including a ceasefire, a transition period, and free elections.

Canada agrees with that plan, he says, adding that ending the conflict is vital.

Canada must be a determined peace-builder and the peace process in Syria is key for the world.
— Foreign Affairs Minister Stephane Dion

“Canada must be a determined peace-builder and the peace process in Syria is key for the world,” he said in a telephone interview from Vienna, where the support group met on Monday, May 16.

Dion said he made several proposals to the meeting, including calling for an end to the use of what are known as barrel bombs—indiscriminate explosive charges that are dumped on villages and neighbourhoods.

He urged that the names of detainees in Syria should be turned over to the United Nations, along with their locations, and he called on Syria to suspend all death sentences.

The main problem is getting the various factions in the country to agree to stop fighting. That would allow easier movement of food and medicines into the country, which has seen up to half its population displaced by the fighting.

If there is no ceasefire by June, Dion said, other steps will be needed.

“If we still have this problem, then the United Nations should be ready to have air drops across Syria of food and medication,” he said.

“Canada will be there to support through the World Food Program.”

The support group first met last fall in an effort to reinvigorate the peace process and find a diplomatic solution to the Syrian crisis in Syria.