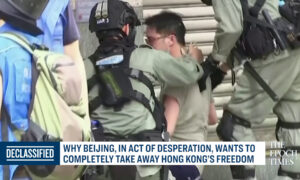 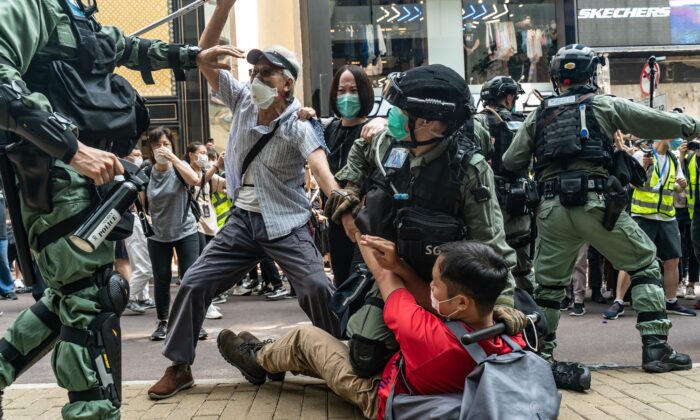 Pro-democracy supporters scuffle with riot police during a detention at a rally in the Causeway Bay district in Hong Kong, on May 27, 2020. (Anthony Kwan/Getty Images)
Canada

OTTAWA—Canada joined with its major allies Thursday in condemning China for imposing a new national security law on Hong Kong, one day after a contentious B.C. court ruling in the Meng Wanzhou affair.

The statement of “deep concern” with the United States, Australia, and Britain comes as experts are warning that two Canadians imprisoned in China could face retaliation because Wednesday’s court ruling in the Meng case didn’t go the way the People’s Republic would have liked.

The Chinese embassy in Ottawa angrily denounced the decision by B.C. Supreme Court Associate Chief Justice Heather Holmes in the extradition case of the Huawei executive, who is wanted on fraud charges in the U.S., as it once more called for her immediate release.

The Meng dispute—which has plunged Sino−Canadian relations to an all−time low—did not dissuade Canada from signing on to a new statement that criticizes China for imposing a national security law on Hong Kong. The Chinese territory is supposed to have autonomy under a “one country-two systems” agreement.

“Hong Kong has flourished as a bastion of freedom. The international community has a significant and longstanding stake in Hong Kong’s prosperity and stability. Direct imposition of national security legislation on Hong Kong by the Beijing authorities, rather than through Hong Kong’s own institutions as provided for under Article 23 of the Basic Law, would curtail the Hong Kong people’s liberties, and in doing so, dramatically erode the autonomy and the system that made it so prosperous,” said the joint statement.

“China’s proposals for a new national security law for Hong Kong lies in direct conflict with its international obligations under the principles of the legally-binding, UN-registered Sino-British Joint Declaration.”

Britain handed over its administration of Hong Kong to China on July 1, 1997 under the agreement.

The sharp criticism comes as the Trudeau government has been dealing with its own China crisis since December 2018.

Michael Kovrig, an ex-diplomat working for the International Crisis Group, and Michael Spavor, an entrepreneur who did business in North Korea, have been in Chinese prisons with no access to lawyers or their families since they were arrested nine days after Meng’s arrest by the RCMP on Dec. 1, 2018.

They are accused of violating China’s national security interests, and they have been denied even the regular monthly visits by Canadian diplomats since January because of COVID-19 restrictions on Chinese prisons.

Some analysts say their treatment could get a lot worse, especially based on recent Chinese government statements leading up to the ruling.

“The PRC authorities’ statement of consequences of ’continuous harm’ to Canada if Ms. Meng is not returned to China forthwith suggests that there will be further retaliation,” said Charles Burton, a China expert with the Macdonald-Laurier Institute, who has served as a diplomat in Beijing.

“I am concerned that Kovrig and Spavor may be forced to make false confessions on Chinese TV followed by a sham secret trial and possible sentences of death, usually suspended for two years before commutation to life imprisonment.”

David Mulroney, a former Canadian ambassador to China between 2009 and 2012, said China is furious over the unresolved Meng case.

“Unfortunately, two innocent Canadians, Michael Spavor and Michael Kovrig, will bear the brunt of that anger. It is likely that the detentions will be extended until China has some clarity as to Ms. Meng’s eventual fate. Unfortunately, that could take some time,” said Mulroney.

“China will also seek to lash out at Canada.”