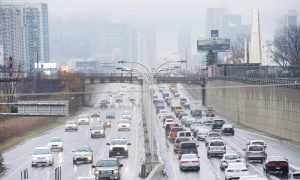 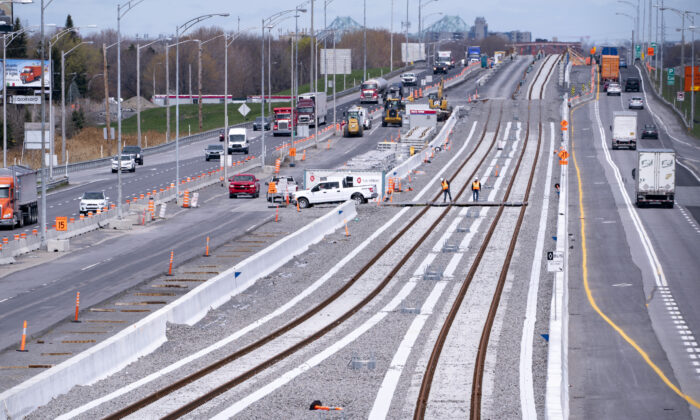 Construction workers on the site of the Réseau Express Métropolitain (REM), a major public transit project, in Brossard, Quebec, on May 11, 2020. The REM is a major infrastructure project partly funded by the Canada Infrastructure Bank. (The Canadian Press/Paul Chiasson)
Canada

The Canada Infrastructure Bank (CIB) is off to a sluggish start investing in revenue-generating projects and attracting private-sector capital to reduce costs to the government, according to a March 23 Parliamentary Budget Officer (PBO) report.

The CIB is a federal Crown corporation and one component of the Investing in Canada Plan (IICP), launched in 2016, which aims to commit over $180 billion in taxpayers’ money for infrastructure over 12 years.

The PBO states that in about four years of operation, the CIB has invested only $1.23 billion of its $35 billion mandate—just 3.5 percent—and has received 420 project proposals, but it has only finalized investment in two of those projects, neither of which has any private-sector participation.

The CIB aims to attract capital from private-sector investors as well as institutional investors, such as mutual funds, pension funds, and insurance companies.

In 2016, then-finance minister Bill Morneau said the CIB aimed to attract “pension funds and institutional investors for four or five additional dollars” for every federal dollar.

While the CIB has not attracted strictly private capital, spokesperson Félix Corriveau told The Epoch Times that one of the two finalized investments—a $6.3 billion transit project in Montreal—attracted a $3.2 billion investment from CDPQ Infra, the infrastructure investing subsidiary of Caisse de dépôt et placement du Québec, a provincial Crown corporation that manages several pension plans and insurance programs in Quebec.

“We need to attract new investments from everywhere,” wrote Minister of Infrastructure and Communities Catherine McKenna in a recent statement of priorities and accountabilities letter.

The CIB is still salvageable, but the government has to understand the mistakes it made, Carleton University business professor Ian Lee told The Epoch Times.

“Recognize that just redefining something [as infrastructure] doesn’t make it so. Let’s go back to old-fashioned … traditional infrastructure,” he said.

Lee’s criticism of the CIB is that the government is trying to dictate the kind of infrastructure the private sector should be partnering with it on—laden with social and ideological objectives that create red tape. But he points out that the private sector, above all, needs a profitable revenue stream, as it’s not supported by taxpayers.

“Loading it up with all kinds of social objectives made it less economic, or less profitable, less viable. And that too scared off the private sector,” he said.

The top reasons for project proposals being rejected by the CIB are “ineligible sector and insufficient size and lack of scalability,” according to the PBO.

If a potential project is not within the five investment sectors—public transit, clean power, green infrastructure, broadband, and trade and transportation—it would be rejected, Corriveau told The Epoch Times.

He said that, in addition to the two projects for which investment has been finalized, three more have been confirmed and another seven projects are expected to reach a firm commitment by July 1. These include the CIB’s first energy retrofit project and investments in broadband, clean power, and zero-emission buses.

The PBO report also reiterated the PBO’s previous findings on the IICP as a whole, which raised concerns about data gaps in tracking federal money, spending that lagged behind plans, and job creation and economic growth being lower than anticipated.

Almost coinciding with the PBO report on the CIB, the auditor general slammed Infrastructure Canada for being “unable to provide meaningful public reporting on whether the Investing in Canada Plan was meeting its objectives.”

The main issue was that it did not include legacy programs that existed before the IICP, even though they account for nearly half the plan’s $188 billion commitment.

McKenna’s response to the AG report was to outline what has already been spent—$81 billion in over 67,000 projects with 90 percent completed or underway. She also pointed to the launch of an “engagement paper” on Canada’s first National Infrastructure Assessment (NIA).

The aim of the NIA, according to its announcement, is to invite feedback from Canadians to help identify the country’s infrastructure needs and priorities and inform long-term planning toward a net-zero emissions future—”Building the Canada We Want in 2050.”

But Lee said the NIA is designed to address potential reprisals during the upcoming federal election.

“I think that this announcement is damage control. It is designed to ward off criticism … and they will say, ‘look, look, we’re in charge of the situation,’” Lee said.

Canada has a sizable “infrastructure deficit” in the amount of spending needed in repairs and new construction to bring the stock of infrastructure up to a suitable level. It’s a result of many years of population growth combined with government under-spending, wrote Christopher Ragan, director of the Max Bell School of Public Policy at McGill University, in a Maclean’s op-ed.

Most estimates of the deficit range between $110 billion and $270 billion, according to a 2017 Boston Consulting Group report, which characterizes Canada’s infrastructure quality as “mediocre” and having a significant portion of assets in poor or very poor condition.

It adds that much of Canada’s key infrastructure still relies on older technology and that Canada has consistently lagged in transportation, utilities, and energy investments.