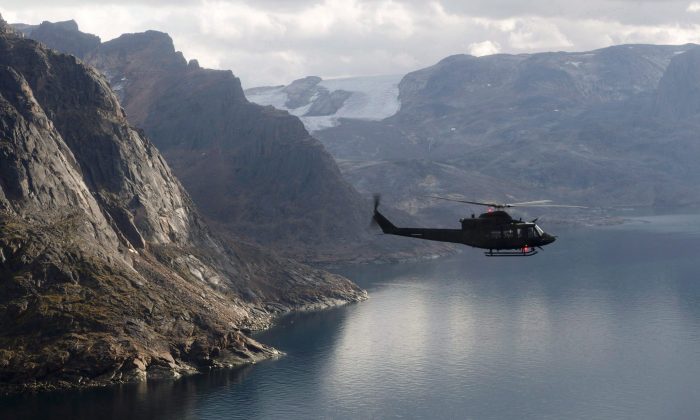 A Canadian military helicopter flies along the shoreline of Baffin Island during Operation Nanook, Aug. 26, 2014. Former foreign affairs minister Lloyd Axworthy says Canada should be at the forefront of an international push to de-militarize the Arctic and declare it a nuclear-free zone. (The Canadian Press/Adrian Wyld)
Canada

OTTAWA—Lloyd Axworthy, a prominent former foreign affairs minister, says Canada should be at the forefront of an international push to de-militarize the Arctic and declare it a nuclear-free zone.

Axworthy says there’s very little international framework governing the Far North, which makes him nervous considering that the United Nations will begin drawing boundaries between nations within a few years. He was speaking at a Canadian Defence Association Institute symposium on the effects of climate change on security policy.

The Harper government has sought to increase Canada’s military presence in the North through light naval icebreakers, a new deep-water base, and more winter warfare exercises.

But Axworthy, who served as foreign affairs minister under Jean Chretien, says Canada’s efforts pale in comparison to the billions being spent by Russia.

He says there is little in the way of international mechanisms, other than the Arctic Council, to deal with disagreements that come up as global warming opens northern shipping lanes and resource exploration.

‘The Vaulter’ bank robber, sought for years by Canada, arrested in Geneva

Geneva police have announced the arrest of the “most-wanted bank robber in Canada”—nicknamed “The Vaulter” for his technique of jumping over bank counters in his heists while holding a handgun.

The French-American citizen, who was not identified by name, had been sought under an international arrest warrant issued by Canada in connection with 22 bank robberies over the last five years.

A Geneva police spokesman said the 53-year-old suspect was intercepted while driving a compact car on a Geneva street and taken into custody without incident. He is being held pending extradition procedures.

The Canadian Bankers Association had offered a $100,000 reward for information leading to his arrest.

BLAIRMORE, Alta.—The mother of a two-year-old girl killed in southern Alberta broke down in tears after an old friend of hers was charged with first-degree murder in the case. Cheyenne Dunbar said Wednesday, Sept. 16, she has no idea why someone would want to harm her daughter, Hailey Dunbar-Blanchette.

RCMP say Derek James Saretzky faces two counts of first-degree murder in the deaths of Hailey and her father Terry Blanchette. He also faces one count of indignity to a human body in relation to Hailey’s death.

Dunbar, 20, said Saretzky, 22, was an old friend of hers, but they never dated as some reports have suggested. She said both she and police are baffled by the killings. She said she hadn’t spoken to Saretzky in years and had forgotten about him.

Police have said Saretzky and Blanchette were acquaintances, but Dunbar didn’t know how they knew one another.

Montreal Canadiens defenceman P.K. Subban and his foundation have pledged at least $10 million to the Montreal Children’s Hospital. The hospital is calling the money the largest philanthropic commitment ever made by a professional athlete in Canada.

The agreement will see Subban, 26, become a spokesperson for certain fundraising campaigns and flagship events organized by the Montreal Children’s Hospital Foundation.

In recognition of the donation, on Sept. 16 the Children’s officially inaugurated the “P.K. Subban Atrium,” a 486-square-metre, three-storey public space located at the heart of the hospital’s new facilities.

The partnership will also see the creation of P.K.’s Helping Hand, a fund dedicated to assisting vulnerable families financially hurt by a child’s illness.

Oland has pleaded not guilty to a charge of second-degree murder. The trial got underway at the Court of Queen’s Bench with Justice John Walsh telling the jury to keep an open mind.

Crown counsel P.J. Veniot told the jury during his opening statement that the 69-year-old victim suffered six defensive wounds to his hands during the fatal beating in July 2011.

Veniot also said said Dennis Oland owed his father a significant amount of money and was having financial difficulties. He said the jury will hear that Dennis visited his father’s office on July 6, 2011, one day before Richard Oland’s body was found.

KAMLOOPS, B.C.—Gasoline prices have been down over the summer thanks to a plunge in oil prices, but a senior analyst at the consumer website gasbuddy.com warns a change is on the way.

Dan McTeague predicts motorists from Thunder Bay to British Columbia will be paying more when gas prices jump as much as five to seven cents a litre. He says speculators are pushing up the wholesale price of gas by 4.5 cents per litre.

The hike is partly due to seasonal maintenance at several Midwest U.S. refineries, but McTeague says a major production problem at a Husky refinery in Toledo, Ohio, is the root cause.

He notes the hike is even more unexpected because Oct. 16 is the first full day of the switch from summer-blended gasoline to winter-blended fuel, which is much cheaper to make.

McTeague believes motorists around Metro Vancouver and on Vancouver Island won’t feel the brunt of the increase because gas for that region comes from refineries in the Pacific Northwest.