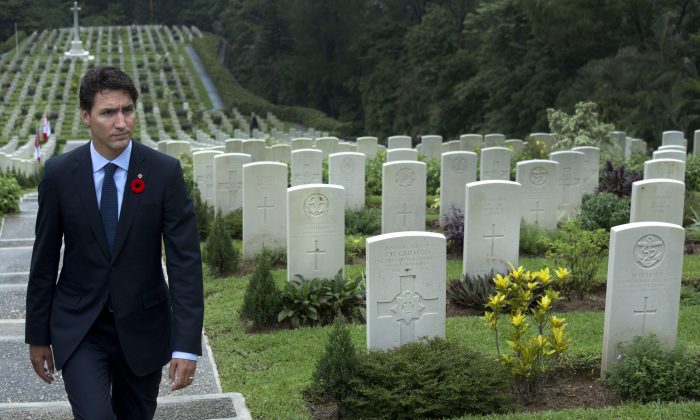 Prime Minister Justin Trudeau walks amongst the headstones at the Sai Wan war cemetery in Hong Kong on Sept. 6, 2016. The Sai Wan Bay Memorial includes the names of 228 Canadians who died in the defense of Hong Kong during the World War II. (AP Photo/Vincent Yu)
Canada

Trudeau laid a wreath and toured the sweeping mountainside grounds. He walked past several rows of gravestones engraved with the names of Canadians—each decorated with a single poppy and the Maple Leaf.

There are 1,505 Commonwealth casualties of the Second World War buried there, including many Canadians who died fighting the Japanese. A memorial at the cemetery bears the names of 228 Canadians.

This was the last day of public events in China for Trudeau, closing out an eight-day official visit.

TORONTO—The union that represents about 23,000 auto workers in Canada has selected General Motors as its target company in the opening round of contract talks.

Unifor says any agreement it strikes with GM will serve as a template for negotiations with the two other big U.S. automakers, Ford and Fiat Chrysler. Unifor’s contract with the so-called Detroit Three automakers expires Sept. 19.

GM’s Oshawa plant, whose future is on the line, represents the struggle between the union’s desire to keep investment in Canada and efforts by the Detroit Three to move production to jurisdictions such as Mexico and the southern U.S., where labour and power costs are lower.

CBC’s Peter Mansbridge to retire as anchor of ‘The National’

TORONTO—Veteran CBC news anchor Peter Mansbridge has announced that he plans to retire from his work on “The National” next summer.

The network says Mansbridge, 68, will retire from the helm of its flagship news program after anchoring special Canada Day coverage next July 1, when the country will mark its 150th birthday.

Mansbridge’s career has spanned nearly five decades, including 28 years at the helm of the desk as anchor and chief correspondent.

He has covered every federal election since 1972 and anchored all 10 since 1984. He has also hosted eight Olympic ceremonies, won 12 Gemini Awards, and was named an officer of the Order of Canada in 2008.

Government to stop using ISIL, will instead refer to group as Daesh

OTTAWA—The federal government will no longer refer to the Islamic State of Iraq and the Levant and will instead call the group by a different, potentially insulting name: Daesh.

Public Safety Minister Ralph Goodale revealed the change in a report on terrorism released last month, saying ISIL is neither Islamic nor a state and that the report would instead use the group’s Arabic acronym.

Global Affairs Canada and the Department of National Defence also say they are both adopting Daesh to refer to the group. The decision continues a trend that has been sweeping through western governments.

Although Daesh comes from the group’s Arabic acronym, it can be considered an insult, and it has forbidden use of the term within its territory.

BC government will not reconsider tax on foreign home buyers, says premier

VANCOUVER—The plunge in real estate sales and slowdown in price increases in the Vancouver area last month were exactly what the government was trying to manoeuvre, and Premier Christy Clark says there will be no changes to the foreign buyers tax.

Clark told reporters her government will not reconsider the 15 percent tax that is intended to calm what she called a “distorted market.”

The Real Estate Board of Greater Vancouver announced Sept. 2 that August sales were down by 26 percent compared with last year, signalling a return to more typical levels.

Clark said changes to the new legislation are not an option, the government will be doing even more to try to address housing affordability in Metro Vancouver.

NEW YORK—Fifteen years after the terrorist attacks on the World Trade Center, New York City continues to thank the people of Gander, N.L., for opening their arms to thousands of stranded travellers.

A piece of steel beam from the south tower is en route to the airport in Gander, a gift of the Stephen Siller Tunnel to Towers Foundation, named for a New York firefighter killed while helping to rescue people from the towers.

As a result of the 9/11 attacks, roughly 7,000 passengers were stranded in Gander for three days while all flights were grounded, and were welcomed with open arms by the locals.

The piece of steel is scheduled to arrive in Gander on Sunday, Sept. 11, the 15th anniversary of the attacks.