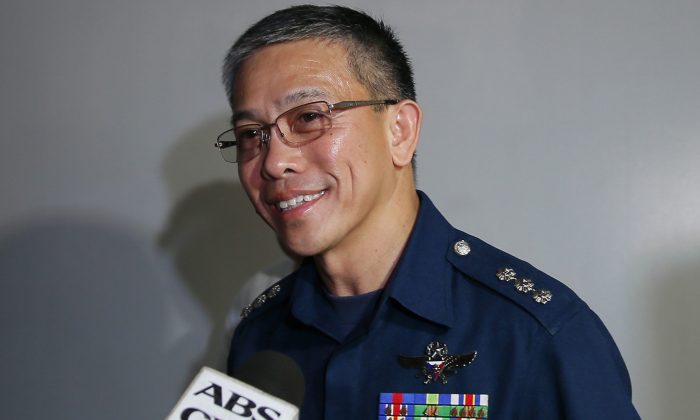 Spokesman Col. Restituto Padilla talks briefly with the media about the latest video of two kidnapped Canadians, a Norwegian, and a Filipina woman as he arrives for a meeting with Foreign Affairs officials in Manila Nov. 4, 2015. (AP Photo/Bullit Marquez)
Canada

TORONTO—Suspected Abu Sayyaf gunmen have demanded more than $60 million for two Canadians and a Norwegian they are holding in the jungles of the southern Philippines in the largest ransom the Muslim militants have sought.

In a video that was circulated online by the U.S.-based SITE Intelligence Group, which monitors jihadi websites, the kidnappers and their captives say for the first time that the Abu Sayyaf was behind the Sept. 21 kidnappings.

Abu Sayyaf has been blacklisted by the United States and the Philippines as a terrorist organization. The hostages, including Canadians John Ridsdel and Robert Hall, were kidnapped from a southern Philippine resort.

Army Brig. Gen. Alan Arrojado said Nov. 4 that the Philippine government maintains a no-ransom policy, adding there would be no let-up in efforts by his troops to secure the hostages’ freedom in the safest way possible.

As he departs, Joe Oliver says he hopes finance successor will curb deficits

During the election campaign, the Liberals pledged to run deficits of up to $10 billion in each of the next three years so they could boost infrastructure spending as a way to stimulate the economy.

Oliver says he’s proud of the Conservative government’s balanced-budget approach and he hopes his replacement makes sure the Liberal shortfalls aren’t deeper than promised. He says the defeat is bittersweet but notes the Conservative campaign could not overcome voters’ powerful desire for change.

WASHINGTON—The National Geographic Society says it will lay off about 9 percent of its staff of 2,000 as a deal to sell the magazine and other media properties to 21st Century Fox nears completion.

Spokeswoman M.J. Jacobsen said in an email late Tuesday that all employees have been told what their employment status will be once the deal closes later this month. Buyouts have been offered to some employees, Jacobsen said.

The agreement will give the company controlled by Rupert Murdoch’s family a 73 percent stake in the new National Geographic Partners venture.

MILTON, Ont.—The preliminary hearing for a woman charged with mischief after providing water to pigs en route to a slaughterhouse has been set for the end of November.

Animal rights activist Anita Krajnc, founder of Toronto Pig Save, says she was on a roadway median giving water to pigs on a hot day in June as trucks hauling the animals stopped at an intersection in Burlington, Ont., when one of the trucks’ drivers took exception.

An argument ensued, which was captured on video, that shows Krajnc feeding water to some of the pigs via a water bottle she pushed through the slats of the truck’s trailer as the driver demanded she stop.

The pigs’ owner, Eric Van Hoekel, complained to police the next day and charges were formally laid against Krajnc in October. Van Hoekel says he will continue to use the law to its full extent if Krajnc tries once again to provide his pigs with a sip of water before they’re slaughtered.

MONTREAL—A meeting between Quebec Premier Philippe Couillard and Quebec aboriginal leaders on Nov. 4 ended with the confirmation of an independent observer into allegations of police abuse of aboriginal women.

The government says lawyer Fannie Lafontaine will take on the independent observer role in regards to the Montreal police investigation into allegations of assault, sexual misconduct, and other abuses of power against eight Quebec provincial police officers based in Val-d’Or, Que.

The investigation was triggered after a report by Radio-Canada on the incidents, which allegedly took place over several years.

Couillard says the province will address relations between First Nations and police forces and took the opportunity to send a message to the incoming federal government that an expected inquiry into murdered and missing aboriginal women should tackle that issue too.

SAINT-JEROME, Que.—A doctor who treated Guy Turcotte following the slayings of his two children says the accused was suffering from severe methanol poisoning which required dialysis that lasted 17 hours.

Pierre Marsolais was working at Montreal’s Sacre-Coeur Hospital, where Turcotte was transferred hours after the slayings from Saint-Jerome, where Turcotte’s former colleagues were in shock and preferred he be treated elsewhere.

Marsolais testified Nov. 4 that Turcotte was clearly impaired and did not have normal alcohol in his system, but did have a high concentration of methanol, found in windshield washer fluid.

Turcotte has pleaded not guilty to two counts of first-degree murder in the deaths of his son, Olivier and daughter Anne-Sophie.

He has admitted to causing their deaths but his lawyers are arguing he should be found not criminally responsible by way of mental disorder. The Crown contends Turcotte is guilty of premeditated murder.