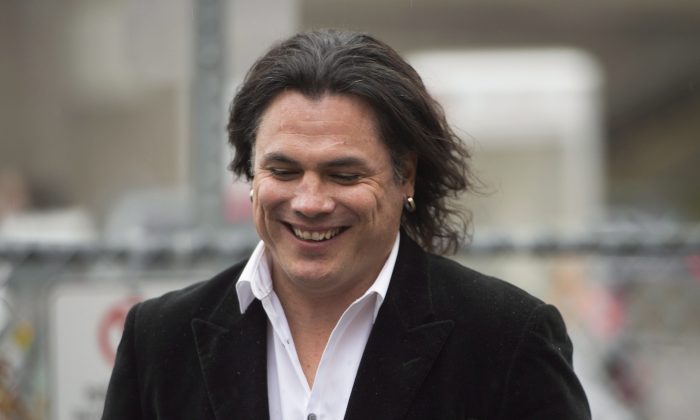 Sen. Patrick Brazeau leaves the Gatineau Courthouse on Oct. 28, 2015. Brazeau was granted an unconditional discharge after pleading guilty to assault and cocaine charges in September. (The Canadian Press/Sean Kilpatrick)
Canada

GATINEAU, Que.—Sen. Patrick Brazeau has been granted an unconditional discharge after pleading guilty to assault and cocaine charges in September, which means he avoids both jail time and a criminal record.

Brazeau pleaded to reduced charges of assault and possession of cocaine after a more serious charge of sexual assault was dropped due to a lack of evidence.

In delivering the decision, Quebec Court Judge Valmont Beaulieu agreed with Brazeau’s lawyer and the Crown prosecutor, both of whom jointly recommended an absolute discharge.

“The Crown certainly saw throughout this process that the lady that made these accusations against me lacked credibility; the judge today mentioned that she lacked credibility. I knew this all along—but it’s over,” Brazeau said after the ruling came down.

Brazeau still faces a criminal trial for fraud and breach of trust arising from his Senate expenses, scheduled to take place in March 2016.

High centre of gravity part of reason for BC tourist boat sinking: TSB

TOFINO, B.C.—Sightseeing passengers crowded the top deck of a whale-watching vessel when it was hit by a wave and then rolled, sending 27 people into the water off Vancouver Island’s west coast, an investigator said.

On Oct. 28, Marc-Andre Poisson, the director of marine investigations with the Transportation Safety Board, released preliminary results of the Oct. 25 accident that claimed five lives. One passenger is still missing.

“We know that most passengers and crew were on the top deck on the port side … this would have raised the centre of gravity, affecting the vessel’s stability,” he said during a news conference.

“We also know that the sea conditions were such that the wave approached the vessel from the starboard quarter,” he said. “We know the vessel broached and then capsized.”

All five people who died were British nationals. The missing man is from Australia.

OTTAWA—As Justin Trudeau prepares to tackle the politics of legalizing pot as part of his Liberal government’s legislative agenda, industry experts say he will have access to a world-class marijuana framework set up under the Conservative government.

Trudeau’s Liberals have promised to legalize and regulate the recreational use of marijuana in Canada. The first step in that process will be to establish a provincial, territorial, and federal task force to hear from public health, substance abuse, and public safety experts.

MONTREAL—The chief of the Assembly of the First Nations of Quebec and Labrador is softening his tone toward the Quebec premier regarding accusations of gross misconduct of provincial police officers toward native women.

Ghislain Picard says he invited Premier Philippe Couillard to a meeting of native leaders in Montreal on Nov. 4.

On Oct. 27, Picard demanded Couillard meet with aboriginal leaders within 24 hours to discuss the case, which shocked many in Quebec and created tension between natives and non-natives in the town of Val d’Or, where the alleged abuses occurred.

The investigation was transferred to the Montreal police and the premier said his government will add an independent observer to oversee the probe.

Notley shuts door on any talk of a provincial sales tax

EDMONTON—Alberta Premier Rachel Notley is shutting down suggestions her spend-heavy budget may ultimately trigger a sales tax to pay for it all. Notley told the house during question period Oct. 28 that no sales tax or harmonized tax will be created on her watch.

“That budget nor any other budget in the term of this government will not and does not include a PST,” she said.

The budget presented by Finance Minister Joe Ceci uses low interest rates and a downturn in the economy to ramp up construction and refurbishment of roads, schools, and hospitals. It projects $34 billion in capital spending over the next five years and $47 billion in total debt by 2020.

The government intends to keep hiring to a minimum, but doesn’t plan to drastically reduce staffing levels in key areas such as health and education. The result is a budget that forecasts multibillion-dollar deficits for the next four years.

OTTAWA—Canada’s military ombudsman has found that National Defence is reluctant to conduct regular health assessments on reservists because over one-third of them have no family doctor—and if they’re sick it would be the department’s responsibility to care for them.

Gary Walbourne’s latest report shows only four of the military’s 18 field ambulance units, which are responsible for part-time soldiers, are conducting exams and that the vast majority of them are not properly equipped to carry out the job.

He says the detachments are understaffed and often don’t have access to the military’s central medical data base.

Walbourne has outlined several areas of concern, including the liability for so-called “orphan patients” with no family doctor.