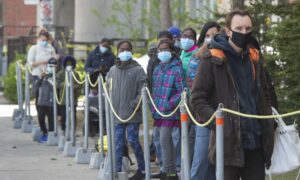 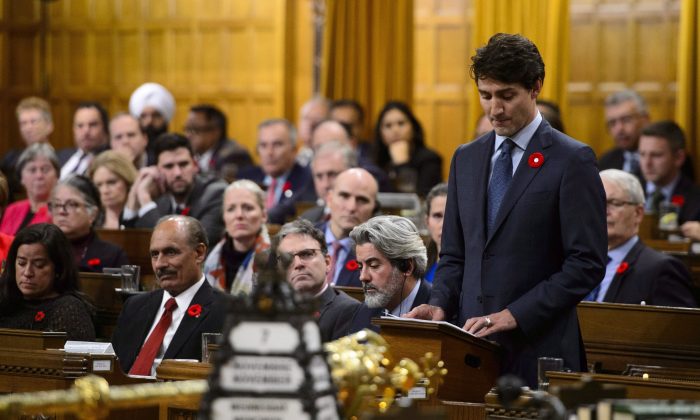 Prime Minister Justin Trudeau delivers a formal apology over the fate of the MS St. Louis and its passengers in the House of Commons on Parliament Hill in Ottawa on Nov. 7, 2018. (The Canadian Press/Sean Kilpatrick)
Canada

In 1939, the government of Prime Minister William Lyon Mackenzie King rejected an asylum request from an ocean liner carrying German Jews as it neared Halifax, forcing it back to Europe.

Most of the passengers scattered across the continent and more than 250 of them died in the Holocaust.

The decision was “unacceptable then and it is unacceptable now,” Trudeau said in his speech on the week marking the 80th anniversary of what is known as “Kristallnacht” and the start of the Holocaust.

New Brunswick will get its next minority government on Nov. 9, one week after the Liberals fell on a confidence vote in the provincial legislature.

Premier-designate Blaine Higgs, leader of the Progressive Conservative party, said he is still in the process of deciding who will be in cabinet.

Higgs has made tackling the province’s financial woes a priority. Among other things, the net debt has swollen to more than $14 billion in the small province of about 750,000 people.

“I am questioning how we are spending at a rate of three percent when we have no more than a one percent rate of growth,” he told reporters.

Scheer says Clement no longer an MP after more allegations

Tory Leader Andrew Scheer says he has asked Tony Clement to leave the Conservative caucus after more allegations of sexual impropriety were brought to his attention.

Clement stepped down as the Conservative justice critic and resigned his committee roles on Oct. 6 after admitting he sent sexually explicit images and a video to someone he thought was a consenting woman. The recipient then turned around and demanded money to not share the images publicly.

“New information became available today that suggests there are allegations that this is not an isolated incident and therefore I’ve asked Tony to resign from caucus and he has done so,” a sombre looking Scheer said, without giving specifics.

Trudeau apologizes to Tsilhqot’in for 1864 hanging of chiefs

Prime Minister Justin Trudeau has apologized to the Tsilhqot’in community for the hanging of six chiefs more than 150 years ago.

Speaking to hundreds of the First Nation’s members in British Columbia’s central Interior on Nov. 2, Trudeau said the colonial officials of the day erred in inviting the chiefs for peacekeeping talks where they were instead arrested, tried and hanged. He said the chiefs are fully exonerated without any wrongdoing because they were acting as one independent nation engaged in war with another when they attacked a road crew that intruded on their territory.

Chief Joe Alphonse said the apology was significant not only because it was the first time that a prime minister visited title lands, but because it was made directly to community members.

Postmedia cancels print deliveries to schools due to pot adverts

Postmedia Network Inc. will no longer be delivering newspapers to schools across Canada in order to comply with federal laws that restrict how cannabis is advertised to minors.

Spokeswoman Phyllise Gelfand says that in order to comply with the Cannabis Act, print deliveries have been cancelled to elementary and high schools across the country that take part in the Newspapers in Education program.

The program is an international initiative that aims to improve media literacy in schools.