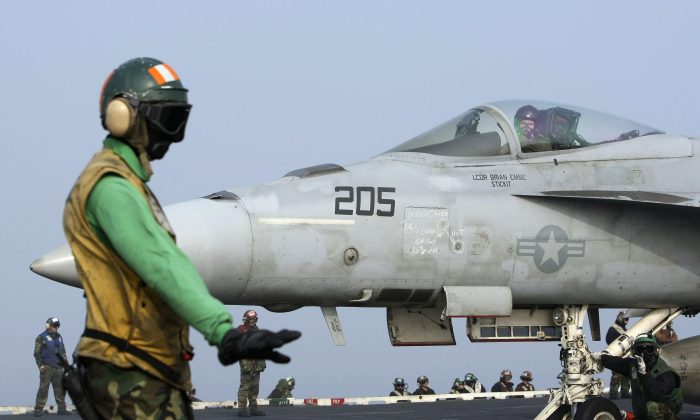 OTTAWA—The federal government says it will “explore the acquisition” of 18 new Boeing-made Super Hornet jets on an interim basis until it can decide on a permanent replacement for Canada’s aging fleet of CF-18 fighter planes.

The government says it plans to discuss the issue with the U.S. and Boeing to determine whether Super Hornets can be procured “at a cost, time, level of capability, and economic value that is acceptable to Canada.”

The government has been struggling with how to fulfil that promise for fear any attempt to exclude the F-35 from a competition would result in a multibillion-dollar lawsuit.

‘Traditional Canadian winter’ in store for most regions: Weather Network

The Weather Network is predicting a cold and potentially stormy winter for much of the country.

Scott says the places that will be coldest compared to their average winter temperatures are in the centre of the country: Saskatchewan, Manitoba, most of Ontario, and western Quebec.

But he says the cold won’t be constant—some days may be warmer than average, and others colder.
Meanwhile, precipitation will be above average, in all its forms: rain, snow, sleet—all are possible, Scott says.

“Every sign is pointing to a more traditional Canadian winter this year,” he says.

OTTAWA—The federal government is moving to phase out a common neonicotinoid insecticide over a period of three to five years after finding that it accumulates in waterways and harms aquatic insects.

Health Canada has announced a 90-day public consultation period on imidacloprid, which is used on everything from cereals, grains, pulses and oilseeds to forestry woodlots and flea infestations on pets.

Neonicotinoids as a class of pesticides have come under heavy scrutiny in recent years for their potential impact on bee populations.

A study by Health Canada found that measurements of imidacloprid in surface water have been found as high as 11.9 parts per billion, while levels above 0.041 parts per billion are a considered to be of scientific concern.