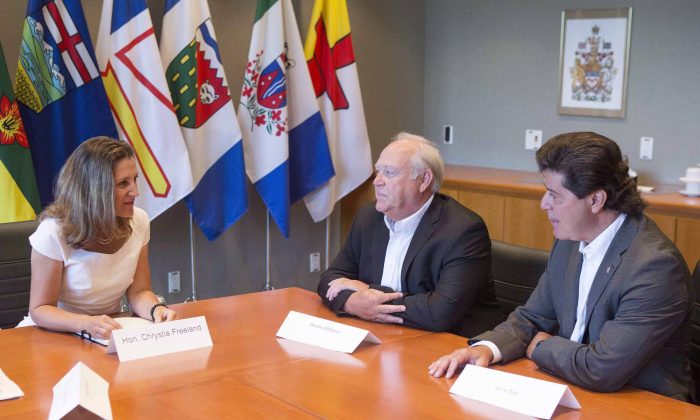 Unifor president Jerry Dias says he and U.S. Commerce Secretary Wilbur Ross have agreed that combating low Mexican wages is the key to breaking the impasse at NAFTA renegotiations.

Dias said Oct. 31 in Washington, D.C., the two parties agreed that Canada and the United States have been hurt by the siphoning off of manufacturing jobs to Mexico and must work together to pressure the country to drive up wages.

Dias said he and Ross believe that a united front is needed to raise Mexican living standards and create a level playing field for workers in all three countries in order forge a path to a new NAFTA agreement.

Oilpatch wants ‘flexibility’ on methane cuts or jobs are at risk

The group that lobbies for Canada’s energy industry says thousands of jobs are at risk unless it gets flexibility implementing new rules on cutting major greenhouse gas.

Tim McMillan, with the Canadian Association of Petroleum Producers, says industry shares the goals of upcoming regulations aimed at reducing methane emissions by 45 percent. But he says methane cuts would be easier in some parts of the oil patch than others and industry should be allowed to take the most cost-effective approach.

Ottawa wants to see the same rules applying to all parts of the industry, something the association says would cost 7,000 jobs.

Saskatchewan MP wants June 21 to be a national holiday

NDP MP Georgina Jolibois’s bill proposes making June 21, National Indigenous Peoples Day, a statutory holiday, which means it would be celebrated nationwide and would be a paid day off for employees.

The bill passed first reading in the House of Commons on Oct. 24. Jolibois hopes her bill will be passed in the spirit of reconciliation.

The first federal survey of what the provinces are doing to preserve caribou says herds and habitat continue to generally decline.

The report says provinces have taken steps toward preserving crucial caribou range but have not met the goals and deadlines laid out five years ago by the federal government.

None of Canada’s 51 caribou herds is known to be growing. Twenty are in decline and not enough is known about 21 of the herds to assess their numbers.

Most of the habitat the caribou depend on is more disturbed than it was five years ago, largely from industrial activity.

Ontario ‘zombie law’ would bar phone use while crossing roads

A proposed law targeting distracted pedestrians would open up a broader debate about the risky behaviour, an Ontario politician advocating for a so-called “zombie bill” says.

Liberal backbencher Yvan Baker says the bill, called the Phones Down, Heads Up Act, would impose fines for anyone caught using a cellphone or electronic device while crossing the street.

The bill would encourage pedestrians to put down electronic devices by imposing fines ranging from $50 for a first offence to $125 for a third offence.