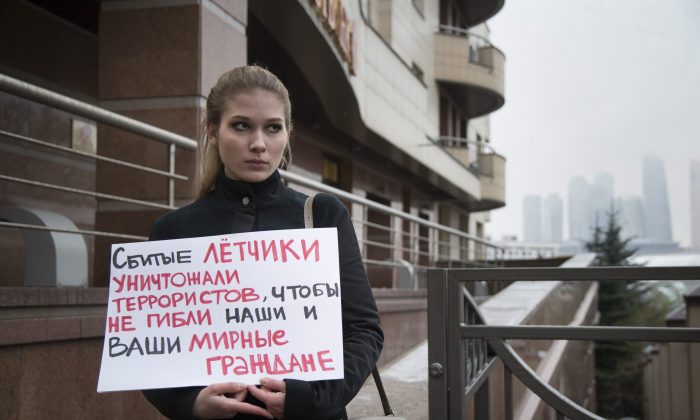 A woman holds a sign as she pickets the Turkish Embassy in Moscow on Nov. 24, 2015. The sign reads : The pilots that were shot down, were fighting with terrorists, to save your and our civilians. (AP Photo/Alexander Zemlianichenko)
Canada

OTTAWA—Canada’s NATO ambassador says Russia has repeatedly fallen short of its commitment to inform Turkey of its bombing runs over Syria in the weeks leading to the Nov. 24 downing of one of its jets by Turkish forces.

Ambassador Kerry Buck says Russia needs to join western forces in attacking Islamic militants, instead of bombing ethnic Turkmen in Syria, whom she described as a moderate opposition to Syrian President Bashar Assad.

The ambassador was in the Nov. 24 emergency meeting of the North Atlantic Council, which Turkey called after it shot down a Russian plane that crossed into its airspace near the Syrian border.

It was the first downing of a Russian plane by a NATO country in more than half a century and marked a dangerous escalation in the long-running tension between the Kremlin and the 28-country military alliance.

Buck says NATO supports Turkey’s version of events, but wants to work toward lowering the heated rhetoric the incident has spawned.

ST. JOHN’S, N.L.—Friends and family members of Ron Hynes are hoping his death will shine a light on the scourge of drug addiction and what they say is a lack of services for people struggling with the disease in Newfoundland.

The musician died last week in St. John’s, N.L., following a return of cancer that was first diagnosed in 2012.

His nephew, Joel Hynes, issued a post on Facebook saying that while cancer may have caused his death, it was a long-time drug addiction that was central to his demise.

Joel Hynes, an actor and writer, wrote that his uncle was destitute when he died, going so far as to sell his treasured guitars “for a pittance to feed his demons and line the pockets of drug dealers.”

Sandy Morris, a lifelong friend and fellow musician, says people in St. John’s were heartbroken as they watched the acclaimed singer-songwriter “waste away” from drug use.

Morris says he hopes Joel Hynes’s post will draw attention to what he says is a growing problem of drug addiction and the troubles people have in getting treatment for it in Newfoundland.

EDMONTON—Alberta MLA Manmeet Bhullar is being remembered by his peers as a mountain of a man, a fierce political debater, and a big-hearted champion of children.

On Nov. 24, white roses, a red prayer book, and the provincial flag were placed on the desk at which Bhullar usually sat in the chamber. Politicians from both sides of the house walked past and paid silent tribute.

Bhullar, 35, was killed Monday on an icy and snowy stretch of the main route between Edmonton and Calgary. He had pulled over to the side of the Queen Elizabeth II Highway to offer help in a vehicle rollover. An oncoming semi lost control and hit him.

Flags at all Alberta government buildings flew at half-mast on Nov. 24 and the Ontario legislature held a moment of silence. In Regina, Saskatchewan legislature member Greg Ottenbreit offered his condolences.

OTTAWA—The Victorian Order of Nurses is shutting down its operations in six provinces and cutting the size of its head office.
Established in 1897, VON provides home nursing, corporate health, and home support services across the country. It’s the longest-standing home and community health care non-profit organization in Canada.

The Ottawa-based organization says it will close programs in Alberta, Saskatchewan, Manitoba, New Brunswick, Prince Edward Island, and Newfoundland and Labrador and shrink its head office by 23 percent.

VON’s operations in Ontario and Nova Scotia, its two main service areas, are not included in the restructuring of its operations and will remain intact.

The organization says it has been a challenge for it to keep up with a growing number of clients with the resources it has.

VANCOUVER—A Vancouver lawyer says the province of British Columbia has made an “embarrassing” argument in an effort to defend itself in a lawsuit by a man who was wrongfully imprisoned for nearly three decades.

Michael McCubbin says the province is acknowledging it screwed up by saying its failure to disclose important documents to Ivan Henry would not have made any difference because he represented himself.

Henry sued the province, the federal government, and the City of Vancouver after he was acquitted of 10 counts of sexual assault in 2010—about 27 years after his conviction.

On Nov. 23, government lawyer John Hunter told the B.C. Supreme Court that Henry’s case might have ended differently had he accepted a publicly funded lawyer. Hunter also said Henry’s lack of legal training meant the province’s failure to pass along potentially damning documents would not have changed the outcome of the case.

The City of Vancouver reached a settlement with Henry last week, but he is still pursuing compensation from the provincial and federal governments.