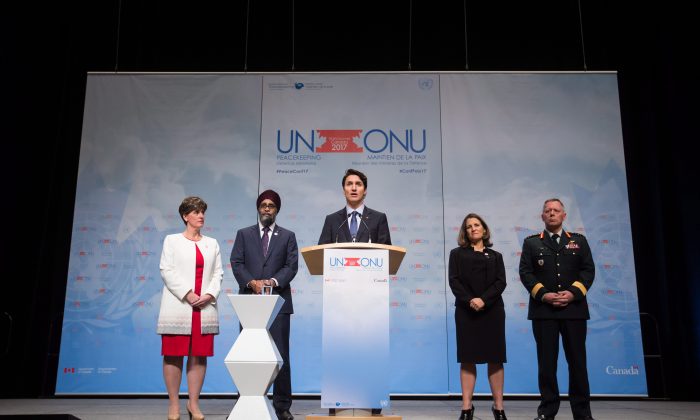 Canada offers UN helicopters, planes, trainers; no decision on where

The Trudeau government is formally offering helicopters, transport aircraft, and a 200-strong rapid-response team of soldiers for U.N. peacekeeping—though it will be months before Canadians know when and where they will go.

Prime Minister Justin Trudeau unveiled the planned contributions at a high-level summit in Vancouver on Nov. 15, including millions of dollars to increase the role of women in peacekeeping.

The moment marks Canada’s most tangible step back into peacekeeping—long the country’s traditional military role—since the Liberals promised last year to provide the U.N. with up to 600 troops and 150 police officers.

An interim report released at a Calgary pain management conference Nov. 13 suggests the best way to cut down on opioid addiction is to not prescribe it in the first place.

Michael Heitshu of the Coalition for Safe and Effective Pain Management said a lack of affordable alternatives for painkillers in Canada is partly behind over-reliance on opioids and rising addiction rates.

He said many symptoms that lead to opioid prescriptions could be treated with other measures such as psychological treatments, physiotherapy, chiropractic care, and occupational therapy.

EDMONTON—One of the world’s largest groups of conservation scientists says Canada’s biggest national park is one of the most threatened World Heritage Sites in North America.

The International Union for the Conservation of Nature says Wood Buffalo National Park is significantly threatened by hydroelectric and oilsands development.

The group, which represents about 10,000 experts from around the world, says the park’s status has continued to deteriorate since the last report in 2014.

UNESCO, the United Nations body that awards World Heritage Site status, has given Canada until next March to come up with a plan to protect the vast area of boreal forest and wetlands.