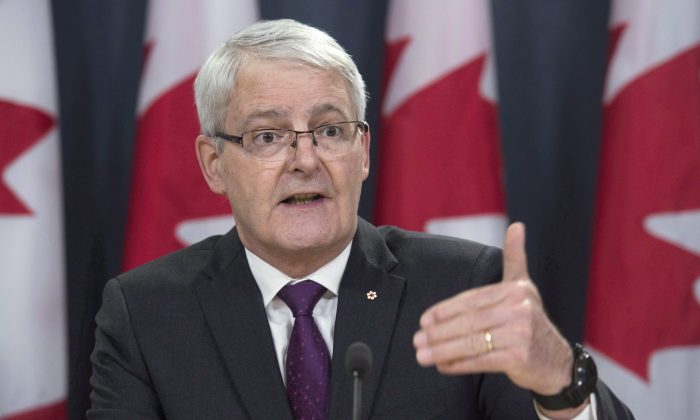 Minister of Transport Marc Garneau speaks at a news conference in Ottawa on Feb. 23, 2017. Garneau is proposing the creation of a tough national standard to penalize distracted drivers who use their cellphones on the road. (The Canadian Press/Adrian Wyld)
Canada

MONTREAL—Transport Minister Marc Garneau is proposing the creation of a tough national standard to penalize distracted drivers who use their cellphones on the road.

Garneau said March 1 that having consistent national rules with stiffer fines and demerit points could address the growing number of incidents.

While dangerous driving is covered under the Criminal Code, cases involving distraction are a provincial responsibility that results in fines and demerit points that vary widely across provinces.

While Garneau has yet to get a response from provinces, he says governments need to act more quickly to fight this growing issue than it did in the past to combat drunk driving.

Turkey: US-based cleric may be planning to escape to Canada

ANKARA, Turkey—Turkey’s deputy prime minister says his country has “serious” intelligence suggesting that a U.S.-based cleric wanted by Turkey may be planning to escape to Canada.

Numan Kurtulmus told reporters Feb. 27 that intelligence gathered by Turkey indicated that followers of Fethullah Gulen had purchased “land and farms” in Canada.

He said the Turkish government has shared this information with the U.S. Department of Justice.

Turkey accuses Gulen of orchestrating a failed coup attempt in July—which he denies—and wants him extradited so that he may be put on trial.

The federal government is moving to improve Canada’s ability to warn people about severe weather, including tornadoes.

The government says it will buy 20 state-of-the-art weather radars that will be built across the country over seven years starting this fall.

Environment Canada says the combination of these radars, along with a recently acquired supercomputer, will give people more time to protect themselves and their property from severe weather.

The new system will cover more of Canada and double the detection range for tornadoes and other severe weather. It will also help forecasters better distinguish between rain, snow, hail, and freezing rain, and provide weather information that can be used in almost every sector of the economy.

MISSISSAUGA, Ont.—The group that regulates family doctors in Canada is calling for an end to solitary confinement in correctional facilities.

The College of Family Physicians of Canada says in a statement that the practice should be abolished for inmates with medical conditions or mental illness, and should be prohibited as a form of discipline.

It says placing inmates in solitary confinement for health-related reasons, such as infectious disease or mental illness, can make the problems worse.

The college also wants provincial and territorial health departments to take over the responsibility of inmates’ health care from justice departments. It says the delivery of medical and mental health care services in federal facilities should be completely separated from Public Safety.

TORONTO—A northwestern Ontario First Nation plagued with mercury poisoning for more than 50 years says it has evidence that toxic material is still leaking from an upstream mill.

Chief Simon Fobister of Grassy Narrows says a new report released Feb. 28 suggests there is ongoing mercury contamination from the Dryden, Ont., paper mill, which was decommissioned decades ago.

The community has dealt with mercury poisoning since the mill dumped 9,000 kilograms of the substance into the Wabigoon and English River systems during the 1960s.