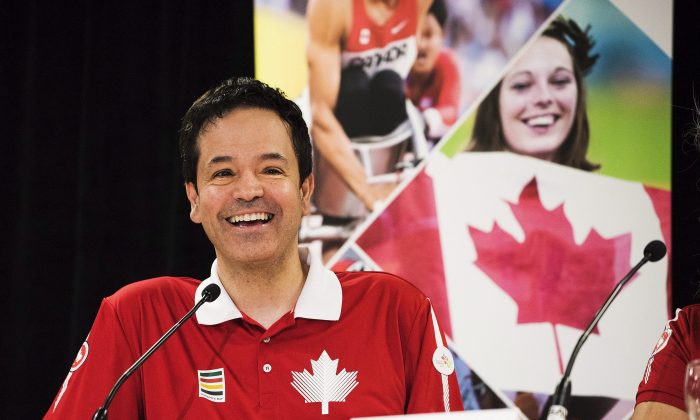 Boccia player Marco Dispaltro speaks after being presented as the flag-bearer for Team Canada during a Parapan American Games press conference in Toronto on Aug. 5, 2015. (The Canadian Press/Aaron Vincent Elkaim)
Canada

TORONTO—Wheelchair athlete Marco Dispaltro will carry Canada’s flag at the Parapan American Games opening ceremony on Friday, Aug. 7. The Canadian Paralympic Committee introduced the boccia player as the team’s flag-bearer at a news conference in Toronto on Aug. 5.

The resident of St-Jerome, Que., who was born with muscular dystrophy, entered the 2015 season ranked No. 1 in the world in his classification.

Dispaltro, 48, won silver in singles at the 2011 Parapan Am Games in Guadalajara, Mexico, and was a bronze medallist in mixed pairs at the 2012 London Paralympics. A former wheelchair rugby player, Dispaltro took up boccia in 2010.

Strategically similar to lawn bowling, boccia is played indoors on a flat, smooth surface. The objective is to throw, kick, or use an assistive device to propel leather balls as close as possible to a white target ball known as the jack. It’s one of 15 sports at the Games.

The satellite radio company says the show, called “Everything Is Political: Campaign 2015 with Evan Solomon,” will premiere Aug. 6 at 6 p.m. and will follow the run-up to the federal election in October.

His dismissal came after the Toronto Star alleged the 47-year-old took advantage of his position to broker lucrative art deals between a friend and wealthy interview subjects. Solomon has denied any wrongdoing.

KAMLOOPS, B.C.—A spike in human-caused wildfires across British Columbia has the forests minister calling for more vigilance from the public. Steve Thomson says only 18 of the 31 flare-ups over the long weekend were caused by lightning.

There are 140 fires currently burning in the province, out of the nearly 1,400 blazes that began this season.

B.C.’s chief fire information officer Kevin Skrepnek says hot, dry conditions will likely lead to an increase in wildfires over the next few days. Campfire bans remain in place across most of southern B.C.

Firefighting efforts have cost the province almost $175 million since April, compared to nearly $130 million spent at this time last year.

Community rallies to save beached whales on Cape Breton Island

JUDIQUE, N.S.—A resident of a small community on Cape Breton’s west coast says about 25 people rallied to try and save 16 beached pilot whales on Wednesday, Aug. 5 after they became stuck on the rocky shores of St. George’s Bay.

Linden MacIntyre, a former journalist who lives about a kilometre from the bay in Judique, N.S., says he believes the whales were beached early Tuesday morning as the tide went out.

MacIntyre says a resident noticed the whales later Tuesday morning and began calling other people in the area to help keep the mammals alive until the tide came back in. He says the rough surf kept the whales wet, so their main concern was keeping the whale’s blowholes uncovered so they did not drown.

MacIntyre says as the tide came in, residents worked together to move the whales to safety, with some wading in neck-deep water. He says 11 whales survived, but five died, including a small whale and a larger whale that was about three metres long.

A hitchhiking robot whose world adventures were cut short over the weekend when it was destroyed on a street in Philadelphia may not be done travelling just yet.

The researchers behind of HitchBot say their child-sized creation, which travelled from place to place with the help of strangers, is being shipped home to Canada.

The solar panel-powered robot had successfully thumbed rides across Canada and through parts of Europe when it was dismantled early on Aug. 1 while trying to find a lift out of Philadelphia. Its arms were ripped and its head was missing.

HitchBot’s creators say the droid could be reassembled and taken back to Philadelphia to complete its U.S. travels. Another option, they say, is to create a new robot that would be sent on student-devised adventures through Canadian schools.

CALGARY—A group leading a push among pilots to form WestJet’s first union says the effort has been rejected.

The WestJet Professional Pilots Association says on its Facebook page that 684 of 1,247 pilots—about 55 percent of those who cast ballots over a two-week period—voted against unionization.

The association says it is disappointed with the result and hopes the process will lead to constructive dialogue between pilots and WestJet going forward.

WestJet had said it believes the fact that it has a non-union workforce gives it a competitive advantage, adding that collective bargaining would have led to service disruptions and increased labour costs.

“We are pleased that the majority of our pilots who voted have voted against union representation,” WestJet CEO Gregg Saretsky said in a statement welcoming the outcome.

“Despite the positive outcome, there is continued work that needs to take place to better understand some of the issues for our pilot group and we can now turn our efforts to that goal.”