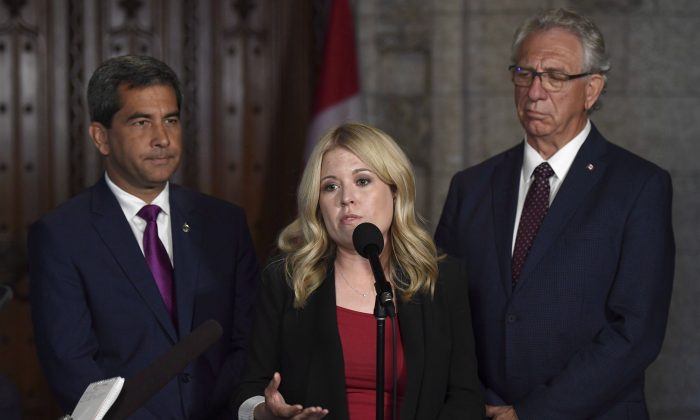 Conservative MP Michelle Rempel stands with MPs Pierre Paul-Hus (L) and Larry Maguire as she speaks to reporters ahead of an emergency meeting of the Citizenship and Immigration Committee on Parliament Hill in Ottawa on July 16, 2018. (The Canadian Press/Justin Tang)
Canada

Tories push Liberals for plan to deal with asylum seekers

Conservative Immigration critic Michelle Rempel is urging the Liberals to come up with a better plan to deal with the influx of asylum seekers crossing into Canada from the United States.

Rempel said all Prime Minister Justin Trudeau has done so far to tackle the issue is shuffle his cabinet and throw money at the problem.

Rempel made the comments during a news conference with Conservative finance critic Pierre Poilievre in Ottawa on July 24 to kick off a full day of hearings by the House of Commons immigration committee.

Committee members agreed last week to hold at least two meetings before August to review the government’s response to the irregular border crossers.

Wife of former hostage Joshua Boyle back in US with children

The American wife of former overseas hostage Joshua Boyle has reportedly left Canada and returned to the United States with the couple’s children, nearly six years after being abducted while backpacking in Afghanistan.

Caitlan Coleman returned home on July 23 with the three children, all of whom were born while she and Boyle were held for five years in captivity by a group with links to the Taliban, according to a report by ABC News.

Boyle did not accompany his wife and children and remains in Canada awaiting trial after Ottawa police charged him in December with multiple offences, including assault, sexual assault, unlawful confinement, and causing someone to take a noxious substance.

A movement is afoot to change the name of a holiday recognizing Europeans’ “discovery” of Newfoundland and Labrador.

Maggie Burton introduced a notice of motion at council on July 23, calling on the provincial government to find a more “appropriate” name, and asking that the city refer to the holiday as “St. John’s Day” in the meantime.

Burton says use of the term “discovery” disregards the presence of Indigenous people who lived in the province long before explorer John Cabot’s arrival in 1497.

Three bison calves have been born in the backcountry of Banff National Park—the first calves conceived in the area in more than 140 years. Two were born on July 15, and the third on July 19.

“They’re doing great, they are up and around and nursing, and doing really well,” said Bill Hunt, manager of resource conservation with Banff National Park. “If we’re really lucky, we’ll have six more born as well this year.

“These are the first made-in-Banff bison.”

It’s the latest milestone in Banff National Park after 16 plains bison from Elk Island National Park were reintroduced into the area in February 2017.

The organization said on July 23 that its latest cohort of influential Canadians will also include a posthumous honour for Montreal singer Leonard Cohen.

In total, 10 people will be recognized at a ceremony slated for December, which also marks the event’s 20th anniversary.