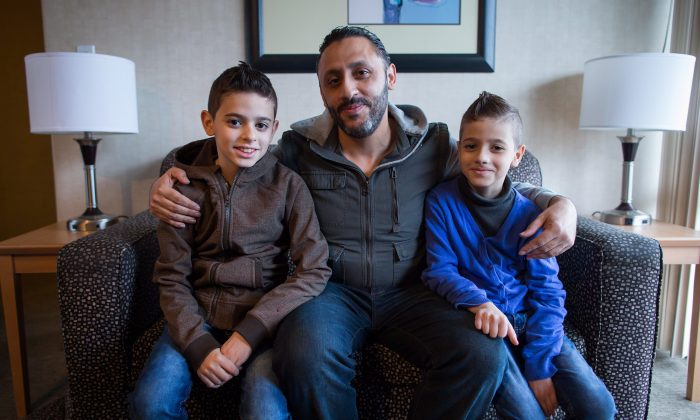 Newly arrived Syrian refugees Ahmad Hwichan and his sons Louai and Qusai pose for a photograph at a hotel where they're living temporarily in Vancouver on Jan. 12, 2016. (THE CANADIAN PRESS/Darryl Dyck)
Canada

But a commitment that the first 10,000 refugees settled would be mostly those with private sponsors didn’t materialize. The majority of new arrivals are instead those whose costs are being covered by the federal government alone, or in partnership with private groups.

The Liberals first committed to a major Syrian refugee program last March, but its size and scope have changed several times. The current pledge is that 25,000 Syrians will be in Canada by the end of February and at least 10,000 more by the end of 2016.

O’Leary, formerly of CBC-TV’s “Dragon’s Den,” has said he is so concerned about what Notley’s NDP government is doing to Alberta’s economy, he’ll invest $1 million in the oilpatch if she’ll quit.

At a news conference Jan. 12, Notley said the last time businessmen spoke out against her she became premier. She was referring to five Alberta corporate leaders with ties to the Progressive Conservatives who held a news conference just before last May’s provincial election.

The five, whom Notley nicknamed “The Monopoly Men,” warned against voting for the NDP and complained that businesses always get the short end of the tax stick.

“So, if now we’ve got a Toronto wealthy businessman who wants to tell Alberta voters how to vote, I say bring it on,” she said.

TORONTO—An Ontario man freed by the Taliban after being held hostage for five years has yet to return to Canada but is recovering from his ordeal, Prime Minister Justin Trudeau said Jan. 13. Trudeau’s comments about Colin Rutherford offered a hint at the condition of the man who was abruptly set free in Afghanistan on Jan. 11.

“We are continuing to monitor his recovery,” he told reporters while visiting city hall in Toronto. “Obviously a very difficult ordeal for five years. We look forward to him returning to Canada soon.”

The Taliban said it freed Rutherford “on grounds of humanitarian sympathy and sublime Islamic ethics.”

The federal government hasn’t said where Rutherford is currently, or when he’ll return to his family in Toronto.

Rutherford was on a private vacation in Afghanistan when he was captured by the Taliban in November 2010. The government of Qatar was involved in bringing about his release.

Rutherford’s brother has called the Canadian’s release “incredible news” and has said Rutherford’s well-being is a priority.

Corrigan has sent a letter asking Trudeau to put the review on hold while the federal government implements promised changes to the way the regulator evaluates projects.

“I am now writing to request that the amendments be expedited to avoid perpetuation of the current, deeply flawed NEB process that the public and your government have already acknowledged is inadequate,” he wrote.

Meanwhile, Premier Rachel Notley is urging the NEB to OK the project, saying the proposed expansion of a pipeline to the B.C. coast is not just in Alberta’s best interests, but is the best thing for Canada as well.

“Our government believes that this project is good for Albertans and good for all Canadians,” Notley told reporters Jan. 12.

“It will create jobs, it will spur economic growth, and it will help ultimately fund many of the programs that support our province’s transition to a greener, less carbon-intensive economy.”