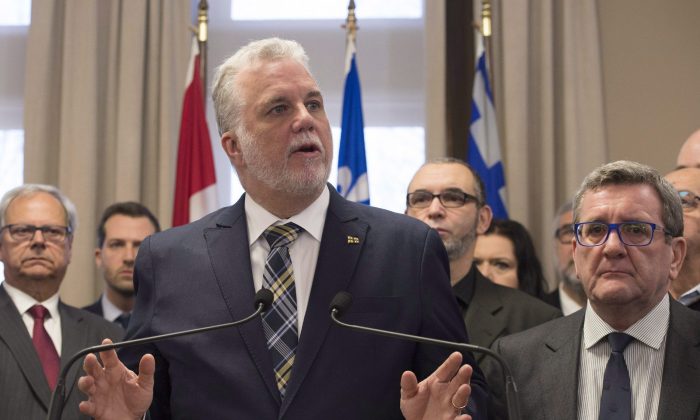 QUEBEC—Premier Philippe Couillard says Quebec has its “demons” but is generally an open and accepting society.

Couillard acknowledges there are xenophobic, racist, and exclusionary elements in the province but rejects suggestions that the deadly shooting at a Quebec City mosque on Jan. 29  is an indication Quebec has failed in its attempt to be an open society.

Asked whether the atmosphere is more insidious in Quebec than elsewhere, Couillard replied that it is different in every community.

Speaking in Quebec City Jan. 31, he urged Quebecers to work together and to continue expressing solidarity with the Muslim community.

Alexandre Bissonnette, 27, has been charged with murder and attempted murder in the mosque shooting.

Chen said in a statement that he is disheartened and does not agree with the sharpness of the executive order. He said the move will make it more difficult to conduct business globally and will hurt trade.

Chen, himself an immigrant, said BlackBerry hopes the U.S. administration will find better ways to handle such matters in the future, noting that more than half of BlackBerry’s executive team and many of the company’s employees are immigrants.

OTTAWA—Former Liberal leader and foreign affairs minister Stephane Dion says he has agreed to be Canada’s ambassador to the European Union. He made the announcement Jan. 31 while saying goodbye to his colleagues in the House of Commons.

Dion, who represents a Montreal riding, was shuffled out of cabinet earlier this month in favour of Chrystia Freeland, a move widely seen as part of the Liberal government’s response to the ascendance of Donald Trump.

Dion did not initially accept the “senior position” offered by Prime Minister Justin Trudeau, a sign that he was not happy about the decision to relieve him of his portfolio.

No need to apologize for ‘race war’ comments about night hunting: Pallister

WINNIPEG—Manitoba Premier Brian Pallister is not apologizing for warning that tensions around night hunting are leading to a “race war.”

On Jan. 31, in his first news conference since making the comment, Pallister said night hunting is a growing problem and needs to be addressed. He said he regrets the turn the debate has taken since he suggested the issue was fuelling a “race war,” but said he was trying to ease tensions at the time.

Pallister told a crowd in Virden, Man., on Jan. 16 that it didn’t make sense to him that young indigenous men were shooting moose at night just because they could.

The comments were widely condemned by indigenous leaders and opposition parties, who said indigenous hunters have the right to hunt at night.

OTTAWA—One of Prime Minister Justin Trudeau’s senior officials is taking Fox News to task for describing the alleged gunman in the Quebec City shooting as Moroccan.

Kate Purchase, director of communications in the Prime Minister’s Office, says Fox tweeted the inaccurate description on Monday, Jan. 29, but has yet to remove it from its Twitter feed.

Purchase’s complaint is contained in a letter to Bill Shine, co-president of Fox News Channel, and was released on Jan. 31.

She says the tweet “dishonours the memories” of the six victims of the Sunday night shooting at a Quebec mosque and also perpetuates fear and division.

EDMONTON—An Edmonton community theatre has cancelled its production of Shakespeare’s “Othello” after receiving threats from people angered by a decision to cast a white woman in the lead role instead of the traditional person of colour.

Volunteer-run Walterdale Theatre Associates issued a statement Jan. 30 saying it regrets to announce the cancellation but can’t continue because the safety of cast members has been threatened.

Artistic director Anne Marie Szucs says in the same statement that the theatre’s vision of the play was of a post-apocalyptic world in which traditional power structures were inverted and the focus was on the battle between the sexes.

Szucs has apologized to those offended by the decision to cast a woman in the lead.