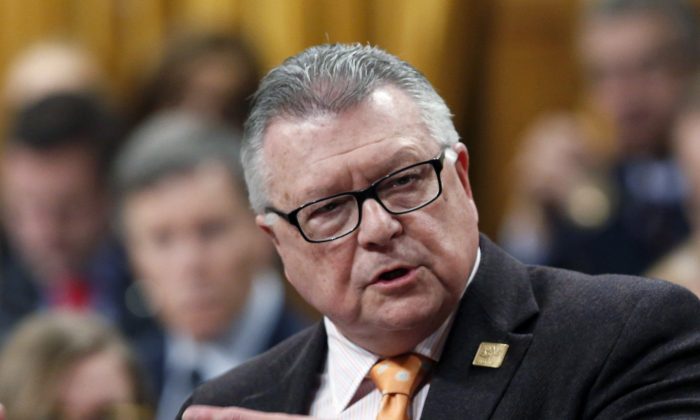 Public Safety Minister Ralph Goodale during question period in the House of Commons on Feb. 15, 2017. (The Canadian Press/Fred Chartrand)
Canada

Goodale to address border issues with US homeland secretary

OTTAWA—Public Safety Minister Ralph Goodale says he will soon talk face-to-face with his U.S. counterpart about the difficulties some Canadians are experiencing at the border.

Goodale says he will have a chance in the coming weeks to discuss any border tensions with Homeland Security Secretary John Kelly. No date has been set for the meeting.

At the same time, Manitoba is grappling with an influx of refugees crossing at remote border points.

TORONTO—Stuart McLean, the bestselling author and soft-spoken humorist whose gentle celebration of life’s biggest and smallest moments endeared him to legions of faithful listeners of CBC Radio’s “The Vinyl Cafe,” has died. He was 68.

CBC said the celebrated storyteller, who had been diagnosed with skin cancer, died Feb. 15 in Toronto.

Tributes immediately poured in from fellow entertainers, broadcasters and fans who were quick to salute McLean’s heartfelt aims to unite Canadians in a way that helped us understand each other, no matter our backgrounds.

McLean was an officer of the Order of Canada, a professor emeritus at Ryerson University, and a three-time winner of the Stephen Leacock Medal for Humour.

The CBC said a public tribute would be announced at a later date.

The RCMP say 748 people lost more than $17 million to online dating scams last year, and urges anyone using apps or websites to find dates to be cautious.

The force says scammers create fake online profiles in order to gain someone’s trust and then ask for money, often claiming to be faced with an emergency. They also say there are safety risks with online dating because it’s difficult to verify a person’s identity or motivations before meeting them.

“In some cases, relationships develop over an extended period of time resulting in the person manipulating the victim through their emotions. This is when the suspect starts asking for financial help under the guise of a fake emergency,” RCMP said in a statement.

“If you choose to take your sweetheart search virtual, keep safety top of mind and trust your gut.”

Wilson-Raybould says the Indian Act will not disappear overnight, but that reconciliation and reform remain critical to Canada’s economic growth. She says the Indian Act currently hinders the ability of First Nations to develop economies on reserve land, as well as their ability to engage with industries and businesses off reserve.

Parliament passed the Indian Act in 1876, giving the federal government enormous power over the control of First Nations people on reserves.

Wilson-Raybould says she is looking to indigenous communities to tell her and the government how they want to govern themselves and who they are.

OTTAWA—British Columbia MP Peter Julian has launched his bid to become the next leader of the federal NDP.

He made the announcement in his riding of New Westminster on Feb. 12, becoming the first official candidate in the race to replace Tom Mulcair in October.

Julian says “regular folks” need to be the government’s priority, not the rich and well-connected.

Quebec MP Guy Caron also announced Feb. 12 that he is stepping aside as the party’s finance critic to consider a leadership bid.