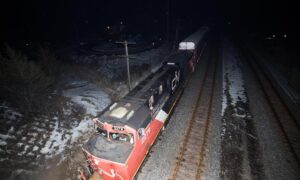 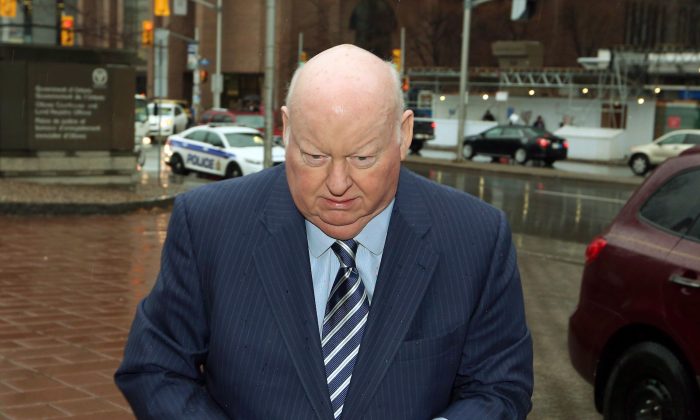 Sen. Mike Duffy arrives at the courthouse for his trial on Nov. 27, 2015, in Ottawa. (THE CANADIAN PRESS/Fred Chartrand)
Canada

OTTAWA—Sen. Mike Duffy said in court Dec. 9 that he was specifically advised by a senior Conservative colleague to file expense claims for his home near Ottawa.

Duffy said when he was appointed to the Senate in late 2008 he became worried over public criticism that he was not qualified to represent Prince Edward Island because he had lived in the Ottawa area for so long.

He said he was told by Conservative Sen. David Tkachuk, then deputy chairman of the powerful internal economy committee, to file living expenses on the premise that the Ontario home was his secondary residence and his P.E.I. cottage his primary one. That way, Duffy said he was told, it would help remove any doubt that he was resident in the province he represented.

Duffy, who has pleaded not guilty to 31 charges, has long waited to tell his side of the story on his contested living and office expenses and the clandestine $90,000 he received from former Prime Minister Stephen Harper’s chief of staff Nigel Wright to repay some of those claims.

EDMONTON—The Canadian beekeeping industry is buzzing over new numbers that show honey production is up.

New figures from Statistics Canada show beekeepers produced 95.3 million pounds of honey in 2015, an increase of 11.4 percent from the previous year. The total value of the sweet stuff is up by 10.9 percent to $232 million due to the increased production.

“The industry is successful and is growing. It really is a positive message,” said Rod Scarlett, executive director of the Canadian Honey Council.

The number of bee colonies increased by 3.6 percent, largely due to milder temperatures last winter that reduced losses, mainly in the Prairies.

Scarlett said Canada has been bucking the trend of declines in bee numbers compared to other countries.

“We have been one of the few areas that stand out, in part because the beekeepers are more well-versed in best management practises and how to handle problems that crop up.”

The industry is also working on an action plan with the federal government to promote bee health, including ways to reduce pesticide exposure in and outside the hive.

Toronto police have charged two men—Christopher George Smith of Toronto and Rajiv Dixit of Vancouver—in an alleged multimillion-dollar pyramid scheme that involved thousands of participants around the world.

Police say the scheme, known as “Banners Broker,” was operated out of a Toronto address between October 2010 and March 2013. It offered participants the opportunity to double their money by investing in an advertising company that had access to a “globally renowned network.”

Police say new investors were drawn into the scheme by false or misleading representations.

By the end of 2012, more than US$93 million was obtained from thousands of participants, of which about $45 million was paid back to participants in the scheme. The remaining funds were funnelled to a number of offshore accounts in Belize, St. Lucia, Cyprus, and other locations.

Calgary police say they are investigating anti-refugee graffiti messages as a hate crime. They believe two men are responsible for spray-painting the messages on some light-rail transit train platforms and ramps last week.

Police say the culprits also tagged several vehicles in a parking lot, and that all the messages were hostile to refugees, some specifically to Syrians.

The city has said it is expecting 1,300 Syrian refugees to arrive in the coming weeks.

Carrie Moffatt booked a flight from Vancouver to Victoria in 2013 with her guide dog when she was informed she would have to fly with an attendant.

Moffatt is legally blind but can read text and communicate orally over a phone. She filed a complaint with the transportation agency after Air Canada refused to change its rules.

The airline drafted a new policy after the agency ruled in Moffatt’s favour earlier this year, but says Air Canada has until Dec. 15 to formalize it and educate employees.

Moffatt says the company’s guidelines were based on the “paternalistic” idea that deaf-blind people can’t be independent and it’s unfortunate the policy change came after more than a year of litigation.

The zoo says the cubs are now sensitive to light and darkness, and are continuing to grow. The two are also developing stronger voices, with their quiet squeaks becoming stronger squawks.

The cubs and their mother, Er Shun, are housed in a maternity den which isn’t open to the public. Er Shun is on loan from China. She and a male panda named Da Mao arrived in 2013 and are slated to move to the Calgary Zoo in 2018.

Staff have said the cubs, if they survive, will live at the zoo for about two years and will likely return to China once they are weaned from Er Shun. The zoo notes it is still a very critical time for the pair.

200 people traveling through Atlanta airport in self-quarantines for coronavirus: GM
0