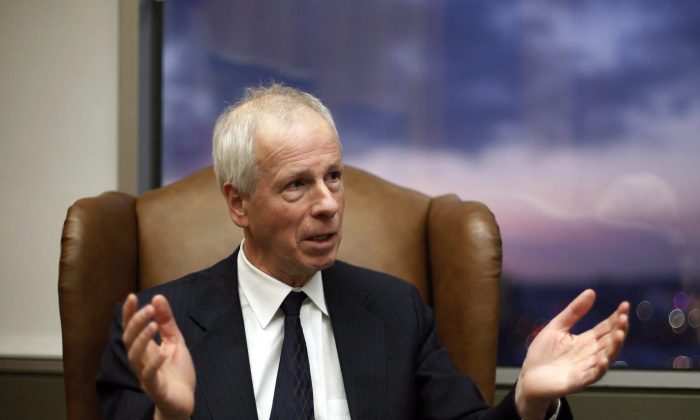 Foreign Affairs Minister Stephane Dion during an interview in his office in Ottawa on Dec. 19, 2016. (THE CANADIAN PRESS/Fred Chartrand)
Canada

And he said it is about time Russia starts pulling its weight in fighting it, instead of pursuing its bitter victories in Syria.

Dion was commenting on the death of a Canadian tourist in Jordan, the assassination of the Russian ambassador to Turkey, and the multiple killings of peaceful Berliners at a Christmas celebration.

In a year-end interview, the minister called the fall of the rebel-held city of Aleppo a “bitter” win for Russia and a failure for “humankind.”

Ottawa says it will ban offshore oil and gas licensing in Arctic waters, a measure to be reviewed every five years.

The joint announcement with the United States also sees President Barack Obama designating the bulk of U.S.-owned waters in the Arctic Ocean and certain areas in the Atlantic Ocean as indefinitely off-limits to future oil and gas leasing.

TORONTO—The parents of a Canadian man held hostage in Afghanistan say a recently released video of their son and his family marks the first time they’ve seen their two grandchildren, who were born in captivity.

Canadian Joshua Boyle and his American wife, Caitlan Coleman, were kidnapped in 2012 while backpacking in northern Afghanistan.

In the video, Coleman, sitting next to her husband, urges government on all sides to reach a deal to secure the family’s freedom.

Boyle’s parents, Patrick and Linda Boyle, say they felt “indescribable” emotions when they watched the video, in which one grandson makes faces at the camera while their own son’s leg chains clang on the floor.

TORONTO—A team of researchers from the University of Toronto says it has discovered the world’s oldest water in Canada.

Professor Barbara Sherwood Lollar says the water was found at a mine in Timmins, Ont., about three kilometres beneath the Earth’s surface.

Lollar, who leads the research team, says laboratory tests revealed the water was about two billion years old. She says the discovery of the “smelly” liquid pushes back the understanding of the Earth’s oldest flowing water and that its composition can support life.

Lollar says the finding has implications for life on Mars because the Canadian Shield, where the water was discovered, is geologically similar to Mars and it’s likely that similar energy-rich water is somewhere deep beneath its surface.

But the regulator says it can’t make full access to ultra-high speed services a reality on its own, and will require business and government help.

The CRTC says the aim is to ensure service providers (ISPs) offer Internet services at speeds of at least 50 megabits per second for downloading data, and 10 Mbps for uploads. ISPs will also be required to offer unlimited data options for fixed broadband services.

The CRTC also says mobile wireless service should be made available to all households and businesses throughout Canada, as well as along all major Canadian roads.

PITTSBURGH—Two Canadians are among the latest 21 people being honoured by the Pittsburgh-based Carnegie Hero Fund Commission, which investigates stories of heroism and awards medals and cash several times a year.

Clark Whitecalf, 41, of Gallivan, Sask., was honoured for rescuing a sleeping woman from a burning house in August 2015.

And 51-year-old Calvin Bradley Stein of Madoc, Ont., received a medal for saving a 3-year-old girl from being trampled by runaway ponies at a fairground in Tweed, Ont., in July and was himself injured in the incident.